As the compulsory Clipper Race sail training comes to a finish with more than 710 crew members completing their Level 4 Training courses, crew who have volunteered to take on the additional non-sailing Victualler role have been spending time at Clipper Race HQ to ensure they are fully prepared for the challenge ahead.

Whilst all crew will rotate into the ‘mother watch’ during racing, where they will prepare hearty meals for all crew, the Victualler crew member has volunteered to oversee the provision of food and other goods to meet the nutritional needs, and ensure the health and well-being of the crew. 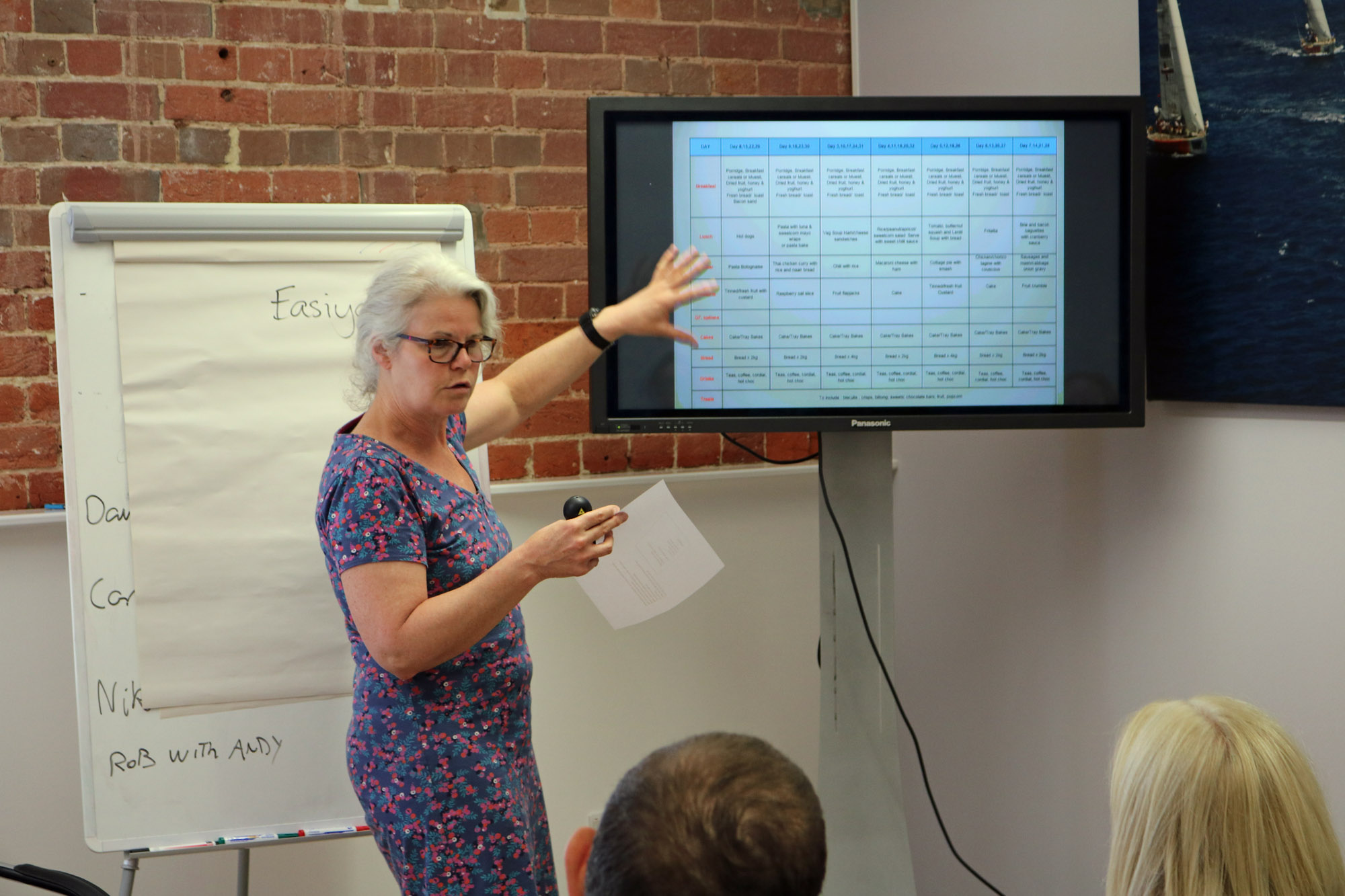 To prepare the new intake of Clipper Race Victuallers, a training day took place led by Janice Tadros, circumnavigator and Victualler on board UNICEF during the 2015-16 edition of the race.

Speaking about what the role of the Victualler entails, Janice explains: “The role involves planning a suitable menu, sourcing and purchasing fresh, frozen, dried, freeze-dried and tinned food, then packaging and stowing the food onboard to ensure it maintains its integrity.

“It also involves ensuring the crew are best able to prepare the food.”

The role of the Victualler is an important one. Crew, who will be burning up to 5,000 calories per day, will need substantial high energy meals to keep them fuelled as they circumnavigate the globe.

Janice says: “It is said to be the most important role on the boat. Food becomes the stuff of conversations, fantasies and dreams during the race, so it's important that crew are well-fed and happy with what they are eating.

“It's very different to catering at home, where there is always the corner shop when things run out!” she adds. 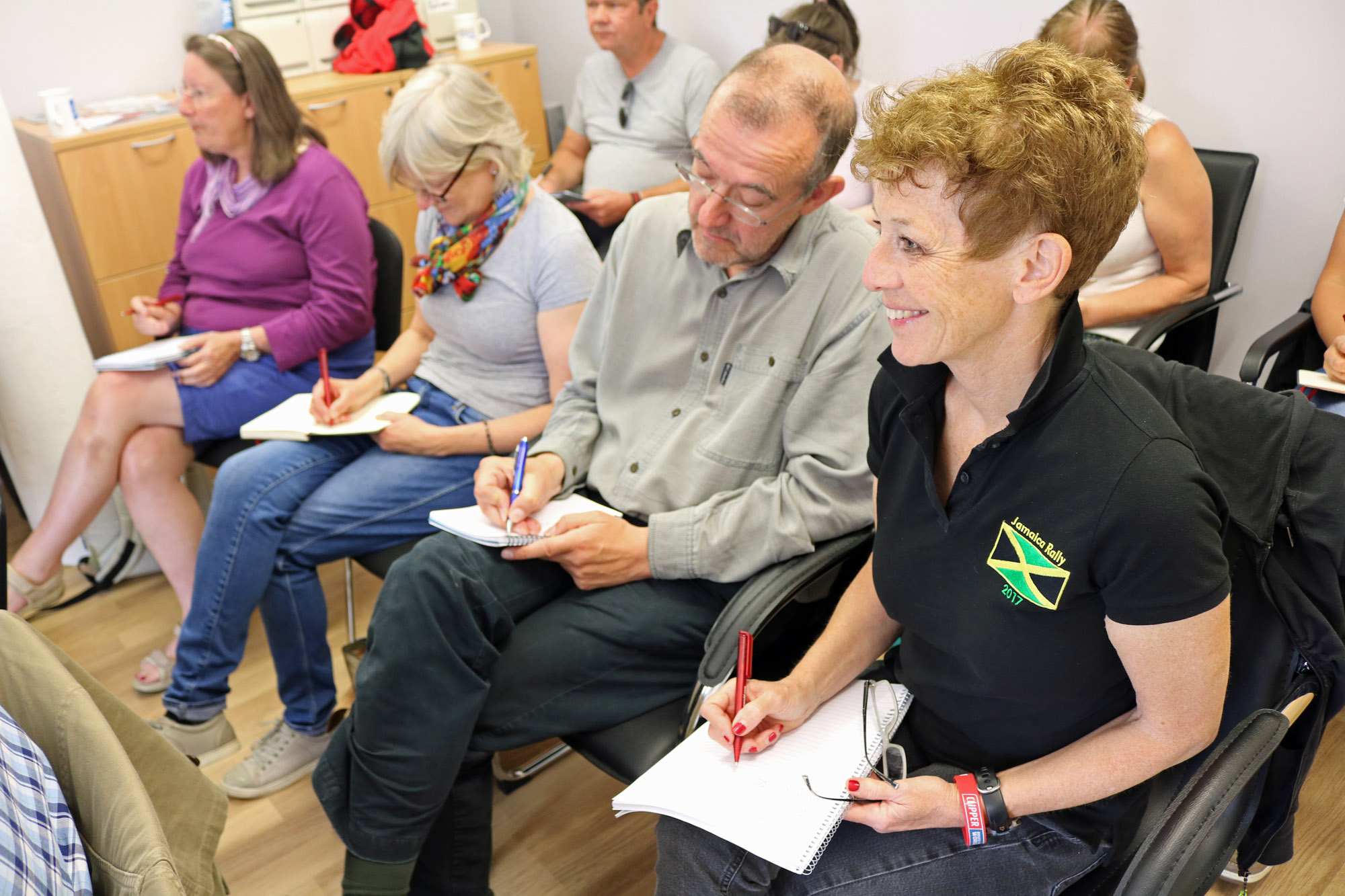 Catering for up to 24 people on dry land is no easy task; add a 40-degree angle and the swell of the Southern or Pacific Oceans and it becomes a real art that will need perfecting by all Clipper Race crew when on the mother watch.

On taking on the role, Janice says: “I wanted a big role, and one that would contribute to the success of the boat. Luckily, I enjoy shopping for food, so one of the best bits was visiting food outlets around the world - they are all so different.

“I also greatly enjoyed seeing the effort crew put into cooking the food to ensure we all enjoyed eating it.”

One Clipper Race crew member who took part in the Victualling Training Day was Jules Spicer, who is taking on the role of Victualler for Team Roy for the 2017-18 edition. 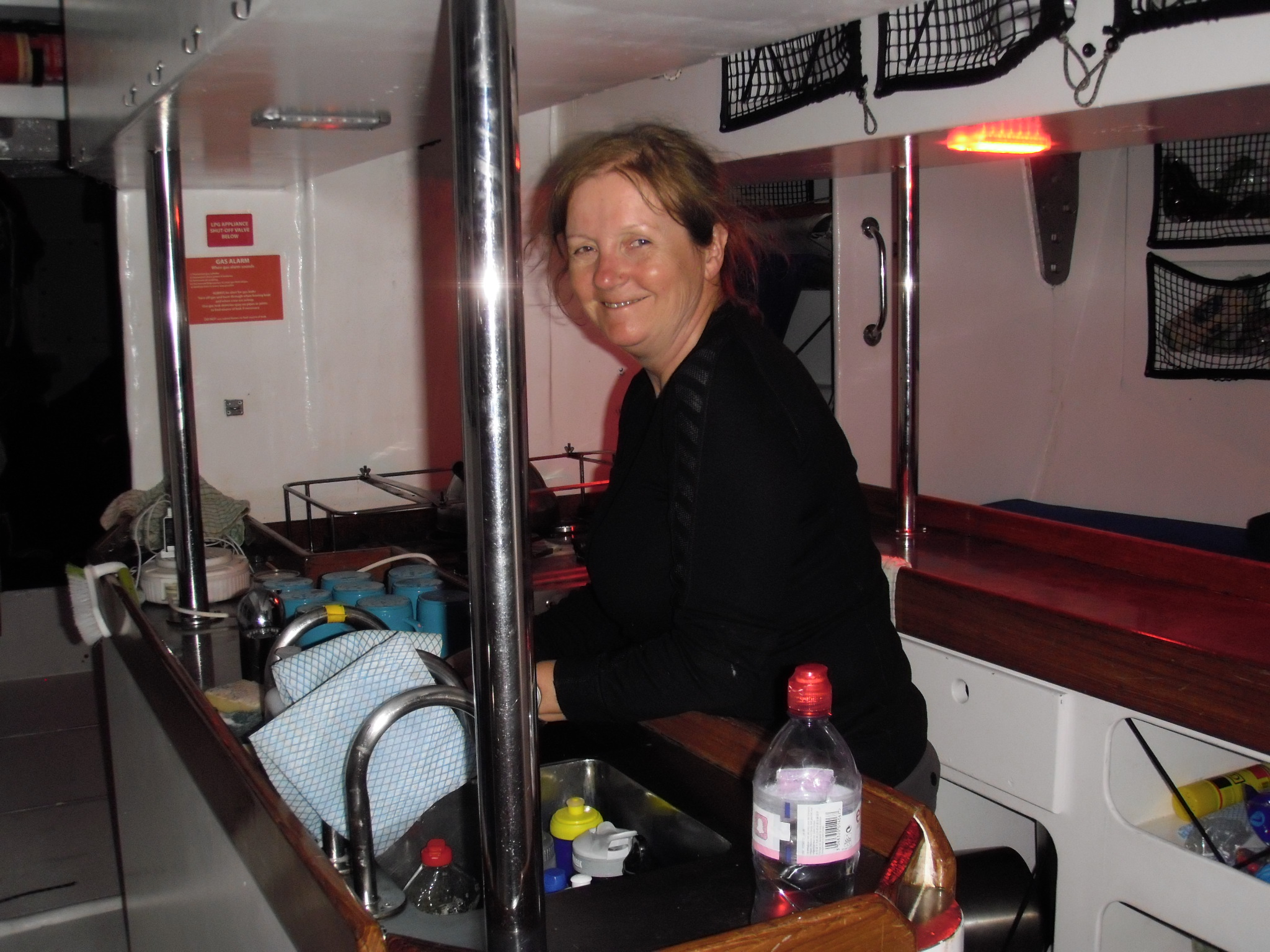 Many Victualler crew members like Janice, who was a primary school teacher prior to taking part in the Clipper Race, have little experience of catering for large groups but Jules is starting her Victualler journey having worked three seasons as a Chalet Chef in French and Italian ski resorts. This involved menu planning and weekly shops in local supermarkets.

Speaking about her experiences, Jules says:

“One of many skills I picked up was the ability to think on my feet, especially when guests arrived without any pre-notification of specific dietary requirements.”

On the victualling training, Jules comments: “It was interesting and hearing from someone else's first-hand perspective was very enlightening. I have subsequently learned that each victualler seems to approach the role differently, and what one boat thinks is a crucial piece of kit, another has circumnavigated without missing the item in question.” 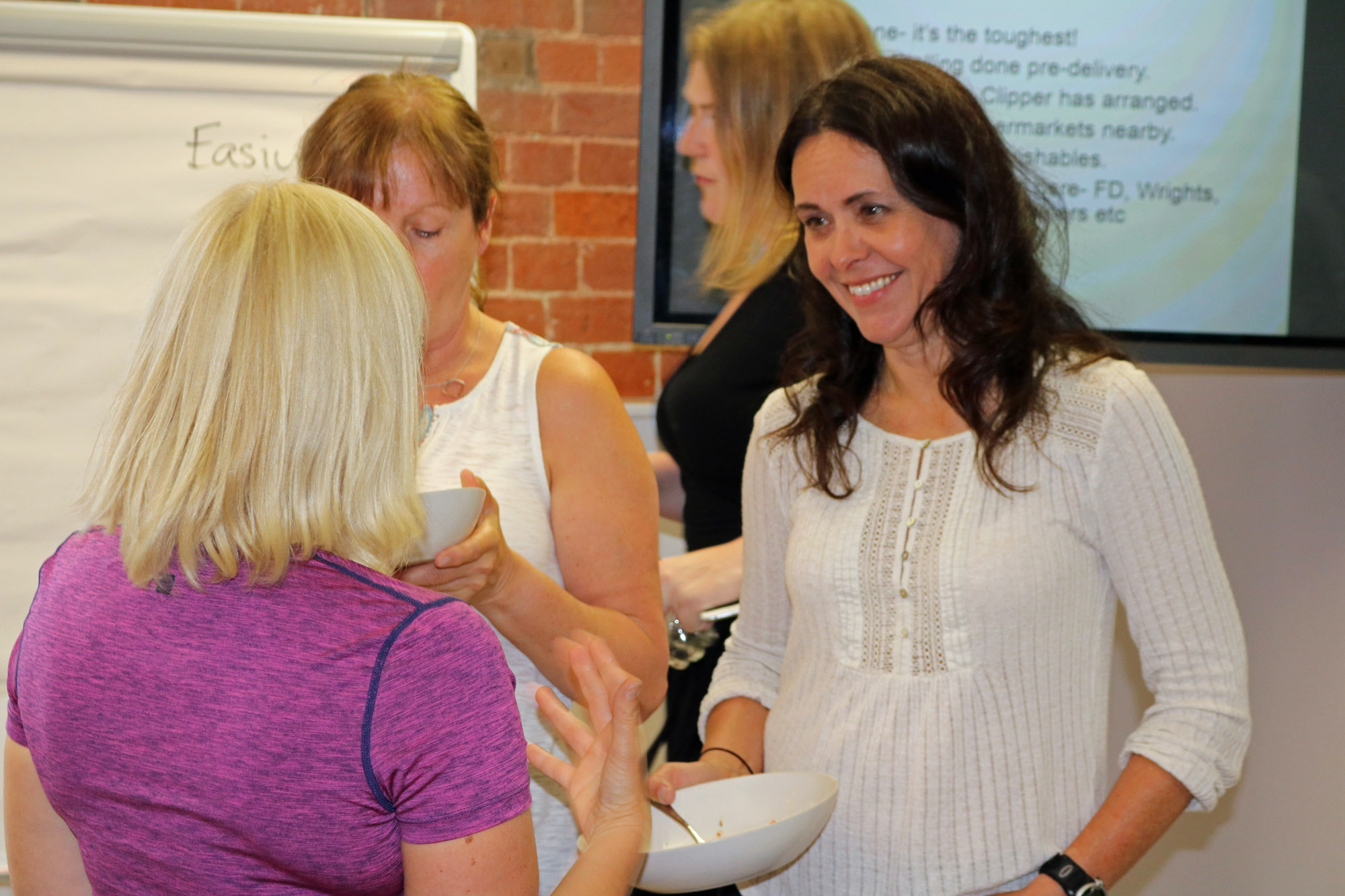 For lunch, the new group of Victuallers were treated to one of Janice’s on board specialities, a vegan curry, which quickly become one of the UNICEF team favourites.

Complimenting the dish, Jules says: “The curry we sampled on the training day will definitely feature on my menu!”

All of the crew are busy making final preparations ahead of lining up in Liverpool for the start of the 2017-18 edition on 20 August.

For Jules, this includes sourcing meal ideas and shopping lists. She says: “I am currently in the middle of menu-planning which has involved web-surfing, visits to various shops and trying out items such as bread mixes to see how a less confident crew-member might cope.

“I'm trying to be as prepared as I can be but no doubt may need to call upon my improvisation skills. My ultimate aim is to keep our crew well-fed and nourished.” 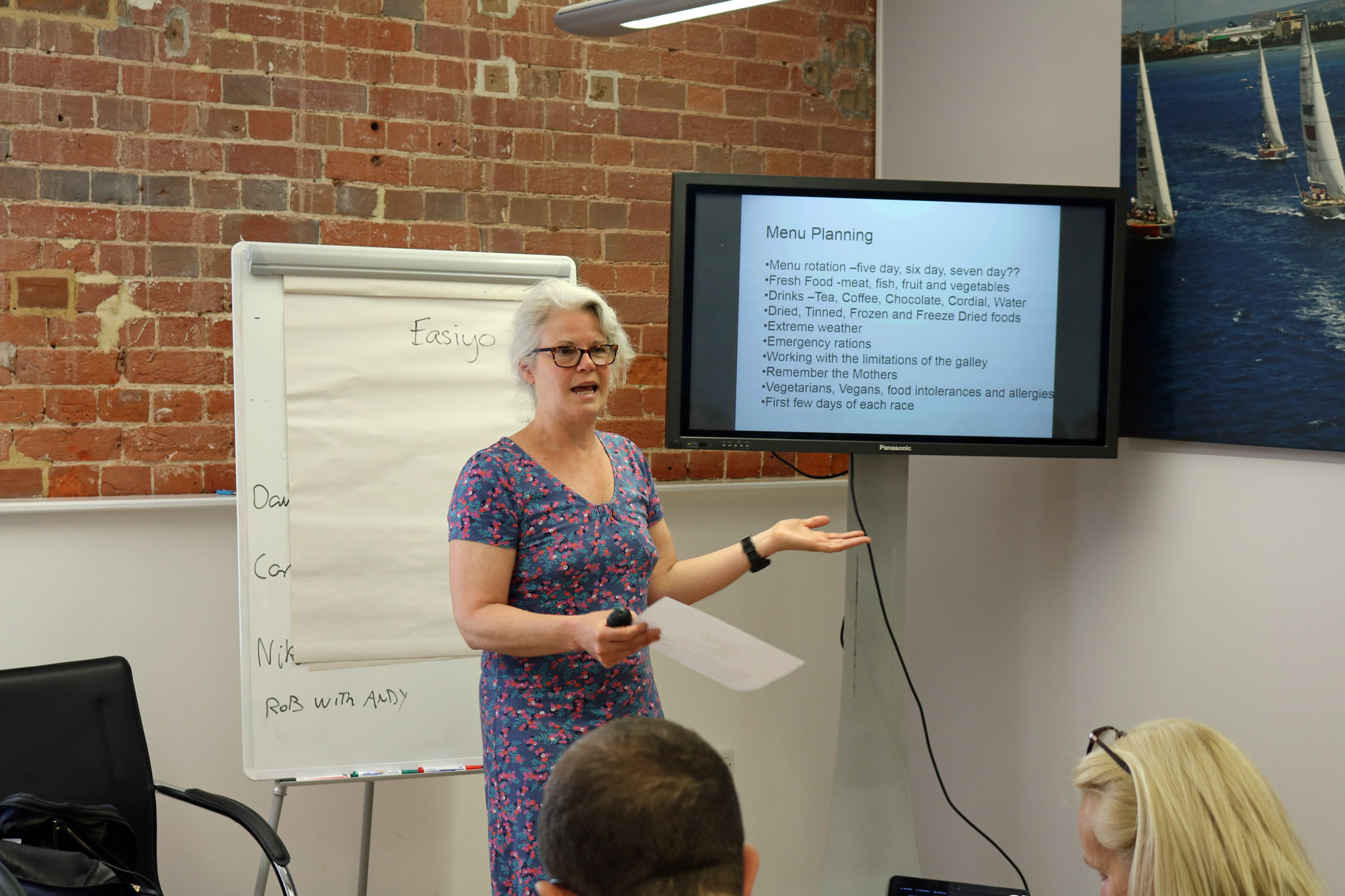 Leaving us with her top tips for future Clipper Race Victuallers, Janice says: “My very top tip is to be a complete control freak about organising, planning, purchasing and packing, but be as hands-off as possible once on the water. Your job is largely done by then, and it's up to the crew to make the most of what you have provided.

“My other top tip is to get as many friends and family involved as want to, in port. They are a tremendous source of help and are often very interested in the process and to see what their loved-ones will be eating during the race. They often came shopping, helped with packing, pre-cooking, transporting and allowed us to take over their fridges, freezers and apartments for packing food bags.

“Lastly, it pays to keep things simple. Cooking on board can be difficult, if not treacherous sometimes.”

We’re supporting every child in danger with race Charity Partner Unicef UK. To make a donation and help us reach our fundraising target of £400,000, click here.

We recently welcomed our Canadian partners, ClipperTelemed+, to Clipper Race HQ in Gosport for Skipper and Medical Assistant Crew training courses.For the third consecutive race, ClipperTelemed+ by PRAXES will be on call 24/7 to provide crew and skippers with medical advice for the duration of…

Over the last six months, the Clipper Race fleet of twelve 70-foot ocean racing yachts has been given a makeover of mighty proportions in preparation for the Clipper 2017-18 Race.In addition to major works during this refit, the Maintenance Team is also carrying out the…

For many people who go on to become race crew, the eye-catching posters across the London Underground and National…