After circumnavigating during the Clipper 2013-14 Race, Kristi Wilson is back on board as a camera operator for our documentary team. During Race 1 she joined the LMAX Exchange yacht. Here Kristi details her experience so far in her new role.

"I'll have to ask the skipper, right now we're all just sheep." An honest reply from Adrian Roberts, a round the world crew member, to a simple suggestion from another member of crew on LMAX Exchange during the first days of Race 1 from London to Rio de Janeiro.

Two years ago, I remember having those same exact sentiments as I set sail for my own circumnavigation on Derry~Londonderry~Doire in the 2013-14 edition.

I wouldn't act on anything without asking at least two fellow teammates and the skipper. But this time around my role is different, and I am no longer an active sailing crew member.” 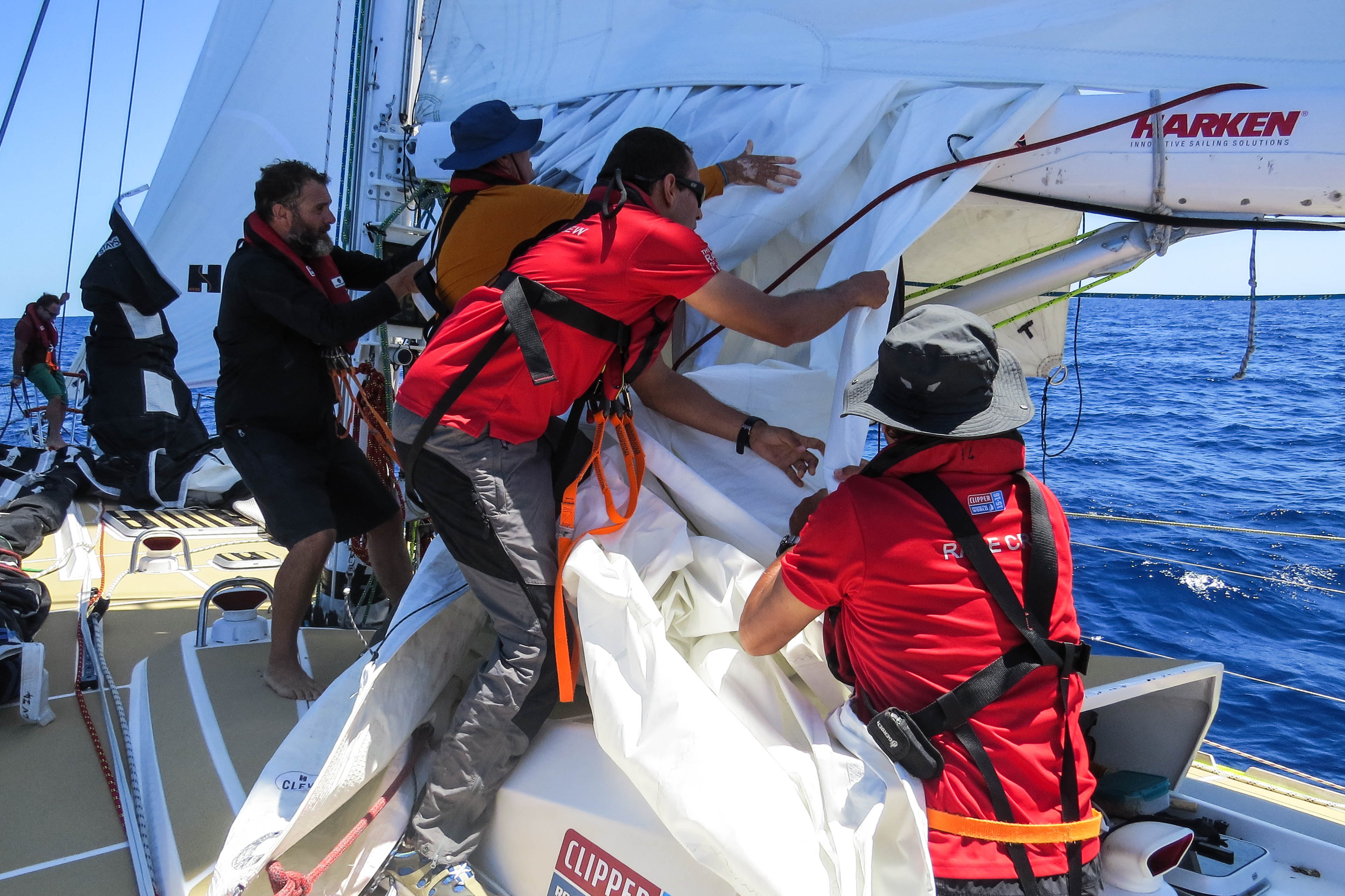 For the past 24 days and 5,200 nautical miles it's been my job to capture the transformation of 23 individual amateur sailors to one efficient ocean racing team on camera as the on board reporter. With LMAX Exchange having an incredible lead over the fleet by more than 250 miles and grabbing the first three points of the race as they passed through the Scoring Gate there's been more to celebrate than lament.

That being said, their Race 1 success hasn't come without its challenges. A major part of this unique experience is the natural growing pains that come with putting people from all walks of life together to create a new team with the purpose to cross oceans, not to mention the majority of the crew have never sailed before completing the four weeks of required pre-race training.

They've had their fair share of 'kitemares.' Getting a taste of what can go wrong on their first day of the race, all three of their asymmetrical spinnakers had seen daylight within an hour of crossing the start line at Southend.

With eleven different nationalities on board, language is also an unforeseen hurdle that intermittently adds to the complexity of evolutions.

One of the difficulties that comes with leading the race is having to be the first to make tough decisions. After being stuck in no wind for half a day, the decision was made to turn on the motor once we entered the 'Doldrums corridor.'

As soon as we crossed the line of 12 degrees North the wind had filled in, blowing at more than 15 knots. The fear was heavy that the other boats would choose to sail and have a higher average speed, giving them the opportunity to chip away at the hard-earned lead of LMAX Exchange.

It was a difficult 24 hours to witness and you could feel the tension lift on board as each position report from Race HQ arrived revealing the closest competitors had also turned on their engines. 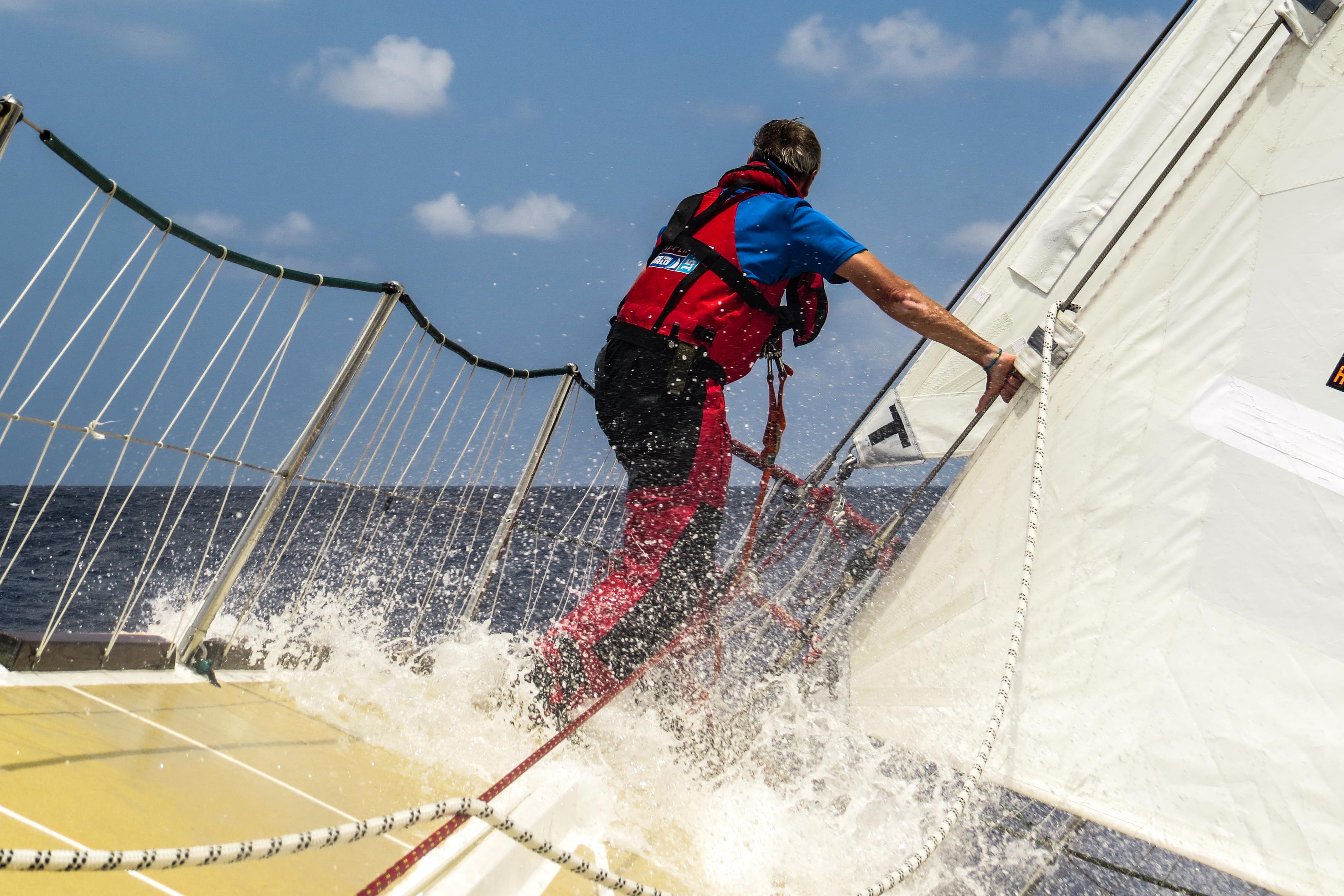 Yes, naturally, mistakes have been made and obstacles have been presented, but it's the crew's response to these trials and their willingness to keep pushing hard that have put them where they are - at the top of the leaderboard.

The skipper and watch leaders are keen to review evolutions gone wrong and improve the next time around. More experienced helmsman provide coaching to reduce the risks of spinnakers wrapping. 'Dummy Checks' are put in place to ensure lines are run correctly. More importantly, if something does go wrong, no blame is placed and I see the crew working together to come to a solution.

After 24 days at sea, this 23 strong crew are anything but a flock of sheep. Crew naturally fall into their well know positions when 'prepare to Gybe!' is called by the skipper from the navigation station. The spinnaker is trimmed without any provocation. Crew members are now recommending sail changes based on shifts in the wind. The skipper even finds time to help in the galley with the bread making.

And that simple suggestion of easing the topping lift on day two of the race? It's no longer needed, it just gets done. All under the watchful eye behind the lens of my camera.

The Race Viewer is the most addictive area of the race’s official website, clipperroundtheworld.com.With real-time updates on each of…

During the most recent Level 4 the media team at Race HQ took the opportunity to capture the crew in action from the air with a pre-race helicopter photo shoot.Extensive planning took place ahead of the photo shoot with team members from media, marketing and…

As we continue our look behind the scenes at Race HQ, we hear from San Francisco-based photographer Abner Kingman who first worked with the race back in 2009.“Each stopover is a big production with many moving parts: sailors, friends and family, staff and media -…