Derry~Londonderry ~Doire has clinched second place into Albany, Western Australia, at the end of Race 3 across the Southern Ocean from Cape Town, South Africa, in the Wardan Whip. It crossed the line at 0932 UTC (1732 local).

The Northern Irish sponsored team has been engaged in a nail-biting duel with Chinese rival Qingdao over the last 24 hours. Its better wind angle enabled it to overtake Qingdao which had to tack and lose its advantage in the process.

Derry~Londonderry~Doire also clinched two bonus points by winning the Ocean Sprint in the closing stages of this challenging 4850 nautical mile ‘sleigh ride’ across one of the most notorious oceans on the planet as it braved a series of storms in the infamous Roaring Forties. 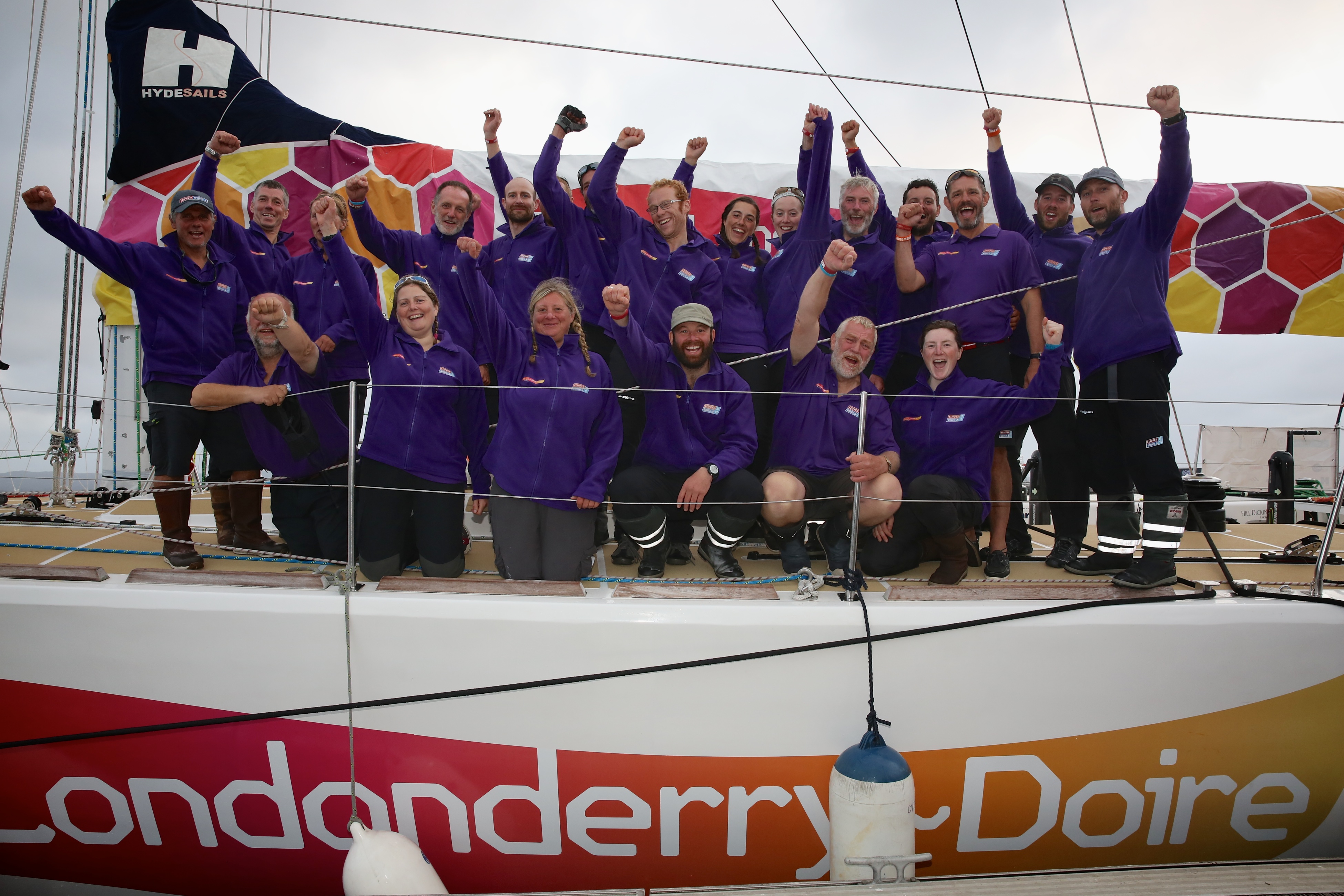 Skipper Daniel Smith said: “We had a real mix of weather, absolutely everything from being becalmed and having to work really hard to keep the boat moving, to way more wind than we wanted at times, so exciting sailing but frustrating sailing too.

“We had big winds and waves, some good speeds and lots of surfing.

“With the storm on the second day, we thought the wind would blow through a lot quicker than it did, so we were able to get the sails going that we had up, and managed to keep going quite well.

“We had been ahead of Qingdao, but there was a big area of light wind coming into Albany, so there were big tactical decisions the last few days about which way to go to try and pass that area of low wind, and it was very frustrating. We weren’t sure about our position coming out of it, so we worked very hard to make sure our position was good as we came into Albany.

“That kept me concentrating, my nerves were on edge a little but I am starting to get a lot more sleep than I was at first. The team knows what it is doing, so I can leave them to get on with it.

“I am very proud of the team, they have worked very hard, especially the last few days - we could have ended up in third place,” Daniel added.

Leg 3 crew member Jo Hillan, from Belfast, said the team had an absolutely fabulous time. "It was just over three weeks of fun, madness, laughter, lots of good times, lots of very hard times. But we are very glad to be here, and so excited to be second. It wasn’t quite the Sleigh ride we were all expecting, but we did quite a bit of surfing, and there was quite a bit of beating at the beginning and the end, and it was hard doing everything at 45 degrees.

"We thought we had lost our second position to Qingdao over the last few days with the wind hole, but having got it back, it has been great for everybody. Once we knew we had that edge, we knew we had a bit more fight left in us to get it back, and it really spurred everyone on.

“The cold was very hard, no amount of gloves seem to help, but we survived. We have had lots of boats come out to meet us here in Albany, the locals are very friendly, and we have beers waiting for us so we are very happy,” she added.

Mayor of Derry City and Strabane District Council Cllr Elisha McCallion has sent her congratulations to the Skipper and crew of the Derry~Londonderry~Doire yacht on securing second place in Leg 3. Extending her best wishes on behalf of the people of the city and district, the Mayor said:

“Each and every member of the Derry~Londonderry~Doire team should be extremely proud, this is a massive achievement. Everyone here at home is absolutely delighted that they have secured another podium place.

“We are very proud to be an Official Race Partner and Host Port, and hugely excited as we eagerly follow the Clipper Race fleet ahead of its arrival here next July for the Foyle Maritime Festival celebrations. Our participation in the race is a fantastic opportunity for us to promote our city and region, and the team is doing a great job of that by telling our good news story and securing podium finishes. Well done to everyone involved and good luck in the next leg of the race,” she added.

The team will now enjoy the stopover in Host Port Albany, where various public and crew events are planned, including aerial displays, try sailing events, rugby and rowing challenges and farmers’ markets.

A busy programme of events for the public and crew is happening this weekend in Albany, Western Australia.Today (Saturday) and tomorrow there are opportunities to see on board the Clipper 70 ocean racing yachts and meet the crew embarking on the Race of Their Lives…

The Clipper Race fleet is approaching Albany, Western Australia, on its way from South Africa, and we want to see your best images of the yachts arriving in to Albany Waterfront Marina, and in situ during the stopover. The winner of the best image will…

After 22 days of racing, LMAX Exchange is within 55 nautical miles of the Wardan Whip finish line…

While the front of the fleet is hoping to have cleared the last of the very light winds, the boats…