Alex Couto, from Lisbon, Portugal, is hoping to take East Timor with him in his luggage as he aims to use his Clipper Race experience to inspire the people there to take up sailing and interest in the oceans. Skipper Greg Miller is clearly going to need a bigger boat…

How did you find out about the Clipper Race?
I sail and it was probably through Yachting World that I noticed the race. I also saw the last race start on the BBC. I can’t remember where I was, maybe in a hotel somewhere on transit as I travel often, but I saw it and thought that is something I would love to do.

At that moment I couldn’t get the time off work though. Then later I saw a friend who was doing it, and I realised I could now do it too. I went online and you hooked me with the website. Days later I was at the office to do my crew interview.

What made you choose Leg 1 – the trade winds to Rio?The first leg worked best with my work agenda. I would like to do more of the race though if I could get the time off from work. Another reason is that I am Portuguese and this route across the Atlantic to Brazil is one many Portuguese people have been doing for a long time, so that also felt like a good reason. I could have done it privately but the Clipper Race allows it to be more fun. It’s a matched race against equivalent boats across the ocean and also the equator so involves changing conditions. It’s great. Awesome.

What is your connection with East Timor?
I went there in 2005 for work. Three years after East Timor got its independence as a sovereign state. I fell in love with it and have worked there ever since, developing infrastructure and business. When I thought about doing the Clipper Race, I realised I wanted to put East Timor in my luggage and bring them around with me.

I’m hoping to inspire the new and the old generation there to take on sailing and projects related to the sea as a means to help the growth of the nation. I’m trying to explain the story of East Timor to everyone I meet through the Clipper Race which is such an international community.

I have been financed to produce a small documentary for the local Television. It will be content made specifically for them in East Timor so the idea is to tell a story about sailing, about the oceans and about the sea. My aim is to inspire the kids and the authorities to help the kids take on these roles. East Timor is an island, well it is on an island, and there are people that want to have the skills in the future to take on off-shore activities, such as oil explorations, the navy, maybe athletes in the Olympics. It would be amazing to see one or more of those kids in the Olympics some day and this will be a great start to reaching that goal. 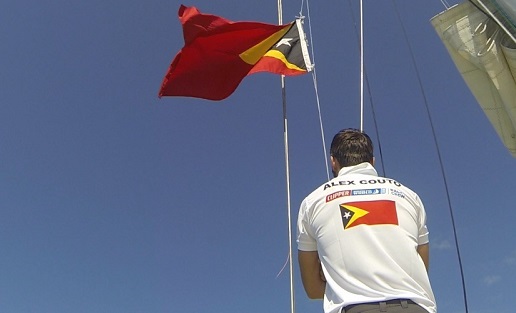 How has your Clipper Race experience been so far?
I came here for the sailing, mostly. My aim was to improve my sailing skills and I also knew that the Clipper Race would have some media presence that would allow me to talk about East Timor. What I wasn’t expecting though was the amount of professionalism and organisation that the Clipper Race puts into the training, compared to other programmes I’ve done.

This amazed me a lot. I wasn’t expecting it and was a very good surprise. To be able to go through survival courses where you actually try the rafts and get to experience all sorts of different emergency situations, and try these hands on rather than looking at pictures or a video, is really important. I’ve just finished all my training and can tell you that the experience you get is very good.

If you would like to join Alex to race the world’s oceans this year, please get in touch via the apply section of the website. We are now also recruiting for the Clipper 2017-18 Race.

This week, we catch up with Zimbabwe born Briton, Muchi Lukhezo from London who was introduced to sailing whilst living…

This week we catch up with former dinghy sailor and retired teacher Jackie Patton from Donaghadee, Northern Ireland on her…