On day 17 of Race 10 from Seattle to Panama the leaderboard has seen almost a complete transformation. With Stealth Mode being used to shield tactical moves or favourable wind shifts, Dare To Lead has reappeared to take the lead for the first time during the Garmin American Challenge. With the second Mandatory Gate, which could become the Race 10 finish line, less then 15 nautical miles (nm) ahead, the team in a strong position at this stage of the race.

Despite Skipper Dale Smyth being frustrated about Dare To Lead’s position further south than the leading pack earlier on, this southerly gamble in Stealth Mode has paid off and when the team reappeared on the Race Viewer, it had covered twice the amount of ground compared to yesterday’s leader, Visit Seattle, and managed to break away from the pack. 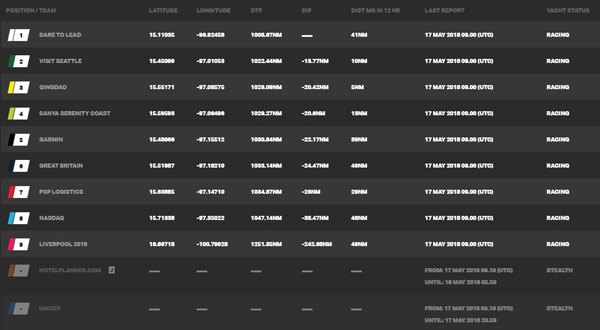 The majority of the rest of the fleet remains parked up off the coast of Oaxaca with the teams struggling to make their way out of fickle light airs with Visit Seattle, Qingdao and Sanya Serenity Coast making less than 20nm in twelve hours. Second placed Visit Seattle Skipper, Nikki Henderson, reports: “3000nm of racing and we are drifting 30nm from a potential finish line within five miles of two other boats. This is intense.”

Despite glimmers of hope, it has been another frustrating day on the water as the variable winds that have plagued the fleet since reaching the doldrums continued. Sanya Serenity Coast Skipper, Wendy Tuck, said: “This afternoon we had a great sail upwind, it took us a while to figure out what to do as it has been ages since we sailed up wind, was nice for a change as it really was cool. This upwind sail is what helped us catch up the leaders, but now we have slammed into a brick wall and its horrible.”

PSP Logistics is now also stuck in the same wind hole, skipper Matt Mitchell reports: “It's been a frustrating day and progress has been slow, although we did get a bit of bonus wind earlier we are well and truly stuck now.”

Elsewhere, Unicef was leading and HotelPlanner.com was in fifth yesterday when they opted to hide their positions from the rest of the fleet, it will be twelve hours until it can be seen whether they have managed to escape the grips of the windless hole and where they will be positioned in comparison the rest of the fleet. 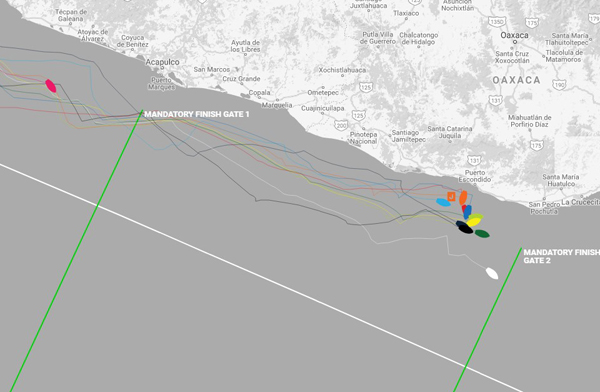 IMAGE: Positions at at time of writing

Despite the leaders grinding to a halt, there has been some relatively rapid progress for the teams who were further back as the wind filled in for them first with sightings of some squally conditions and electrical activity. Currently in fifth, Garmin Skipper Gaetan Thomas said: “For a few hours the wind has made the team work; from nothing, to wind in the face. Then we saw some lightning and I asked to make sure we were prepped to reef the main, it was something far away, a reef, a squall? some wind?!”

GREAT Britain, currently sixth, has managed to break the tie between itself and Nasdaq, in seventh, with the cat and mouse game finally ending when Nasdaq opted to go further inshore and GREAT Britain managed to utilise the increased wind. GREAT Britain Skipper David Hartshorn said: “We started the day close together, then appeared to choose different routes, with Nasdaq going inshore. So, we are once again charging into the night, although lacking starlit backdrop this evening, tonight its different. There is lighting off to our starboard quarter, the smell of rain in the air and some ominous dark clouds gathering.”

These conditions are due to the ITCZ is moving further north as Simon Rowell, Clipper Race meteorologist reports that it is looking like the ITCZ will be right over the fleet from tonight and possibly for the next two to three days and that the teams should expect a lot more squalls and some electrical activity too.

The pressure remains on to reach the second Mandatory Gate Bowley as, if conditions continue as forecasted, the Race Office could decide for the this to be finish line to Race 10. To see how it all unfolds, keep an eye on the Clipper Race Viewer. You can also read the daily Skipper Blogs in full on the Team Pages, as well as keep up with the latest on board in the Crew Diaries.

The final stage of the 4,100 nautical mile Race 10: The Garmin American Challenge from Seattle to Panama is shaping up as one of the most exciting finishes of the Clipper 2017-18 Race so far, with the teams closer than ever off the coast…

After spending years encouraging others to step outside their comfort zones to pursue adventure, Crew Recruitment Director Dave Cusworth…