With just over 100 nautical miles remaining for the leaders, Race 12: The Legenderry Finale is playing out for the podium and certainly living up to its name as a tense battle, which could finish today.

Visit Seattle, leading the fleet for the third consecutive day, is aiming for its third race win, but with a dreaded wind hole ahead, and Unicef and Garmin hot on its heels, just 15 and 30nm behind respectively, Skipper Nikki Henderson is not starting any early celebrations.

Nikki says: “We just started to slow down after a great 24 hours heading in the right direction - straight lining Northern Ireland… The dreaded wind hole looms, so it's anyone's guess as to how well we will do - but either way - it's been an epic race and they have done brilliantly.”

Spirits are high on board Unicef, which is playing its Joker Card on this race and is set to pick up the biggest points haul of the fleet. Skipper Bob, hoping this will be his last blog of the race, explains: “The pace has been good despite the forecast and we have managed to stay ahead of the ridge of high pressure for much longer than we expected, but soon we will be slowing as the wind eases back and veers (moves clockwise).

“Just over a hundred and fifty miles to go and having played our Joker on this race we are hoping for a good result, the pressure is on to make the finish line within the next twenty four hours and avoid parking up for too long!”

After leading for times in this race, and after being overtaken by Unicef during the night due to a kitemare, Garmin is feeling a little unlucky though is still in a strong position to claim its third podium result. Skipper Gaetan Thomas says: “We can see Visit Seattle escaping slowly on our positions report. The more ahead you are, the more wind you have and less chances to finish in a windhole very close to finish! Nail biting!”

The leaders may have opened up quite a gap on the rest of the fleet, with some 70nm separating third placed Garmin and Qingdao, fourth, but there is still plenty to play for amidst the rest of the fleet in this final ocean crossing and penultimate race of the Clipper 2017-18 Race series. 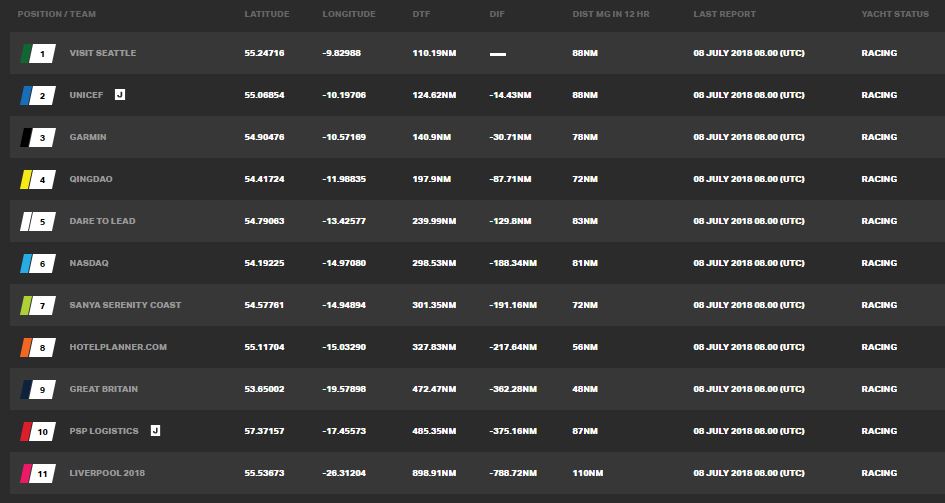 Skipper Dale Smyth of Dare To Lead explains how the fleet got separated, saying: “The boats that split to the south after the Ice Gate seemed to have fared much better weather wise and have made some good advance on the rest of the fleet. Those of us that went north got punished with a couple of lighter patches but that’s often the gamble of ocean racing.”

Nasdaq is just one mile behind Sanya Serenity Coast, in seventh, meaning another close battle to the finish is playing out. Skipper Rob Graham is feeling motivated, saying: “Now that we're back into satellite coverage, we can see just how far ahead the southern group of boats got over the couple of days. Well done to Visit Seattle, Unicef, Garmin and Qingdao (morning all!) for staying ahead of the weather front - Nasdaq just didn't make it, so we lost miles whilst slowly getting nowhere.

“Oh well - now we just have to fight for the lower positions, and with only 300nm to go it's looking close between the next four boats (Dare To Lead, Sanya Serenity Coast, Nasdaq and HotelPlanner.com). Nasdaq just peeled from Code3 (heavyweight spinnaker) to Code 1 (lightweight) in a slowly dying breeze with our sights firmly set on the next race mark off Tory Island.”

Sanya Serenity Coast, which leads the overall race standings, has struggled in this race compared to its usually strong form, however Skipper Wendy Tuck is trying everything to gain ground on her competition, and keep those behind her at bay, saying: “Hard to believe that this last ocean crossing is nearly done, still even harder to believe now is that we are having problems with boat speed. I changed to my lucky crocs and even my lucky sunnies and that didn’t seem to help, still scratching my head over it.

(Image: Taken on board Sanya Serenity Coast by Ming Hao) 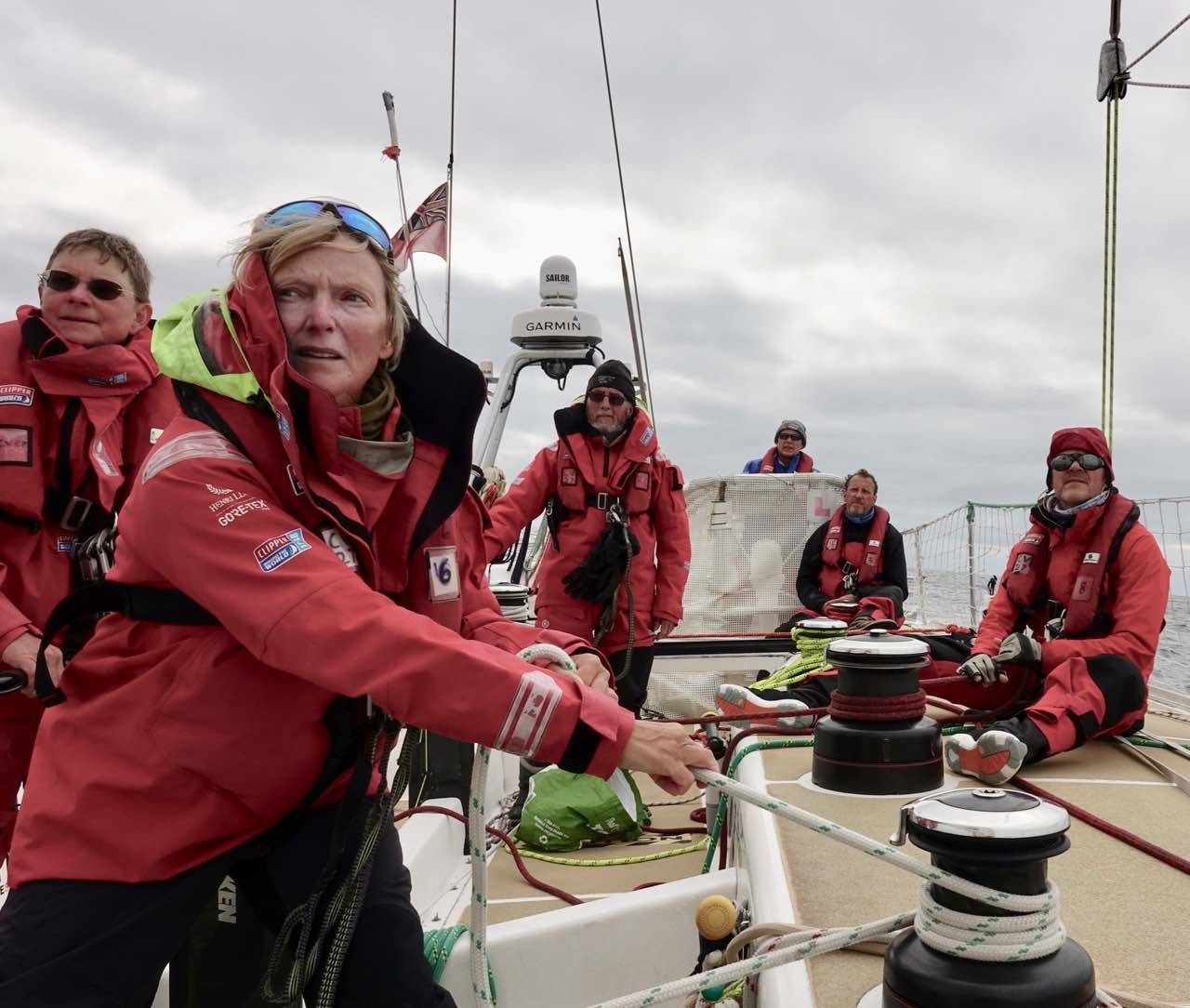 Furthest back, Liverpool 2018 also has its eyes on the Elliot Brown Ocean Sprint and the finish, remaining positive despite its diversion.

Skipper Lance Shepherd says: “When we left St Johns in Newfoundland we were over 500 miles behind the fleet and our race was technically over. Had we gone south west to the position we stopped racing then we would have been about 800 miles and at least five days behind the fleet.

”So, we’re racing ourselves and trying to do the best we can in terms of boat speeds and performance. We can still participate in the ocean sprint and intend to do our up-most to gain as many points as we can.”

Stay glued to the Race Viewer today to see how these final miles play out for the fleet and see if the dreaded wind hole causes any shake ups.

You can find the latest ETAs for the Clipper Race fleet’s arrival into Derry-Londonderry here.

Whatever the final results of Race 12, there will be plenty of celebrations to be had in Derry-Londonderry. As well as the usual famous Irish warm welcome, the award-winning Foyle Maritime Festival will run from Saturday 14 July until the fleet departs for Liverpool on Sunday 22 July. For more information about the festival, see the Derry-Londonderry Stopover page.

After an intense eleven days of racing across the North Atlantic Ocean, the mood across the fleet is that the sprint is very much on for both the Elliot Brown Ocean Sprint, and the finish line in Derry-Londonderry.Whilst teams have been pushing through the Elliot…

It’s full steam ahead for the fleet on the ninth day of racing. Boat speeds are back in double figures after a frustrating day and night moving from one high pressure system to another. After this transitional weather passed, the teams are now eating up…

After no points were issued for any teams for Race 9 (Leg 6), the Clipper Race Committee has finalised the…