It’s full steam ahead for the fleet on the ninth day of racing. Boat speeds are back in double figures after a frustrating day and night moving from one high pressure system to another. After this transitional weather passed, the teams are now eating up the miles with less than 1000 to go until the final stopover of the Clipper 2017-18 Race, Derry-Londonderry.

The fleet continues to be split into two distinct packs. The current leaders - Unicef, Visit Seattle and Garmin - are sticking just south of the rhumb line and despite the vastness of the Atlantic ocean are within ten nautical miles of each other. Visit Seattle Skipper Nikki Henderson said: “No matter how hard we try to run away - clearly blue and green go well together - because Unicef has become Visit Seattle's buddy this race. Anyway, it keeps us driving and competitive and now Garmin has come to join the party again - hey GT.”

It has been a successful few days for the Garmin team, reappearing out of Stealth Mode and claiming the final point on offer from the Scoring Gate yesterday, crossing third behind Unicef and Visit Seattle. They remain focused and Skipper Gaetan Thomas said: “We had some sail evolutions during the day, from spinnakers to white sails, all well done. The chase is still on, especially knowing that the northerly boats are flying and gaining some miles on us!

“The next target is the Elliot Brown Ocean Sprint, another few points to try and get. It looks a bit messy at the moment, we'll see!” 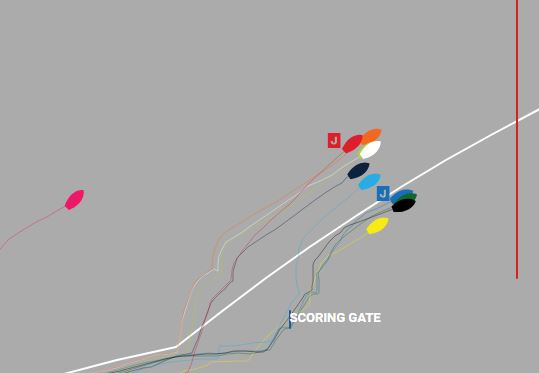 GT is correct to be wary of the pack to the north as the fastest increase in speeds have been seen by these teams. HotelPlanner.com Skipper, Conall Morrison, has taken the most northerly path on route back to his home city of Derry-Londonderry and said: “As we are coming more northerly the fun increases as well as the speed. Full concentration is mandatory in these conditions and everybody is going ‘all in’ 100%.”

Like their counterparts to the south, the northerly teams have very few nautical miles separating them with Sanya Serenity Coast Skipper, Wendy Tuck, reporting: “We are back to speed and trucking along nicely, our now gang of three - us, HotelPlanner.com and Dare To Lead.”

Adding: “Hopefully we can make up ground now on the southern group as we have nice breeze, so it’s going to be a battle for the last 1000 nm.” 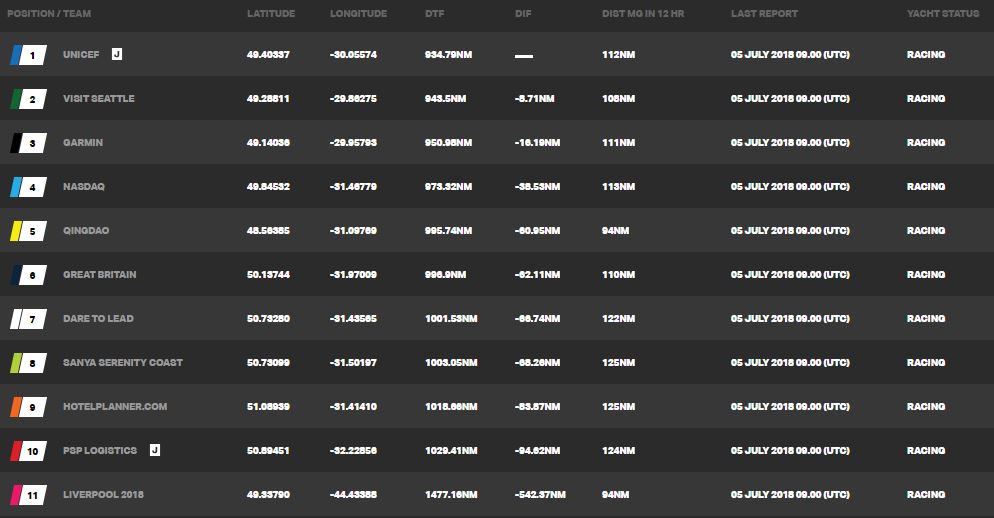 IMAGES: Standings at time of writing

With all the teams so close maximising the current sailing conditions is going to be the key to the final stages of Race 12. Simon Rowell, Clipper Race Meteorologist reports that: “The potential problem is not the high that’s going to be over the UK this weekend, but the one that’s just popping off North America now.

“The streamline plots show it arriving at the West Coast of Ireland on the 9th – if the teams can keep ahead of the middle of that then it’s happy days, if not it could be a slow finish.”

Which team’s tactics will pay off in last 1000 nm? Keep an eye on the Race Viewer to find out. You can also learn more about life on board by reading the Skipper Blogs in full on the Team Pages and the latest Crew Diaries.

It may be the 4th of July but it’s not so much independence day for the Clipper Race fleet as they are still racing in two fairly tight packs. Five teams went for the Scoring Gate but with only points on offer for the first…

A split is starting to divide the fleet as teams make their Scoring Gate decisions, but with only 20 nautical…

Get behind the helm for Unicef - new fundraising initiatives announced

With Race Finish fast approaching the Clipper Race is excited to announce a collection of new Unicef fundraising initiatives.…