The leading teams are reaching the midway point of Leg 3, and with Clipper Race Meteorologist, Simon Rowell, calling the weather ‘fruity’, there were lots of individual sail battles for the Skippers and crew to contend with.

With variable conditions, the teams needed to react quickly to the changeable weather. Says Nick Leggatt, Skipper of Zhuhai; “Quite tricky sailing these past 24 hours, with the wind varying from 15 knots to 50 knots in short bursts of intense squall activity, necessitating a lot of sail evolutions, and really making it awkward to find a good steady pace. Nonetheless the team are rising to the challenge and working tirelessly, day and night.” 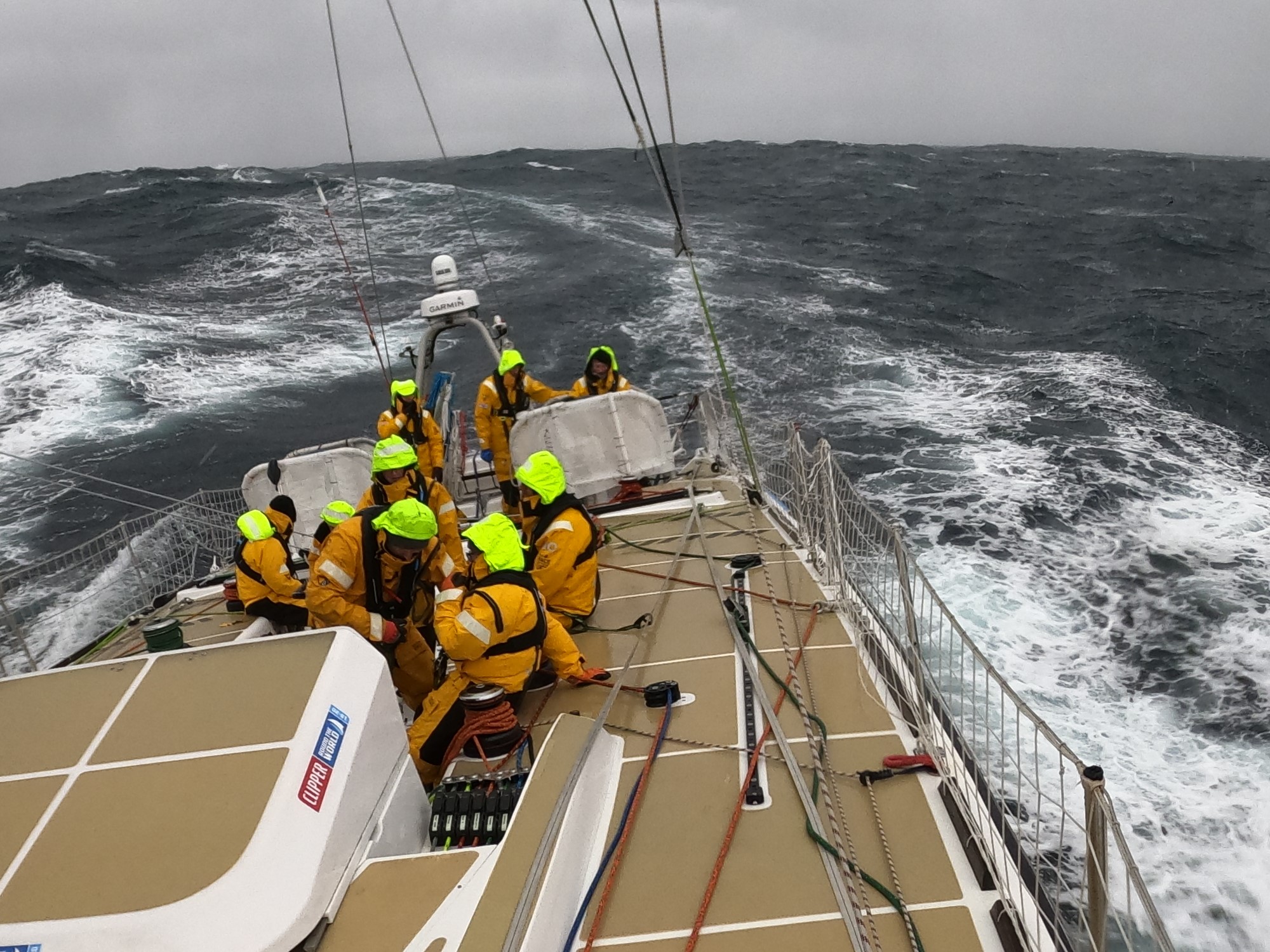 Image: racing on board WTC Logistics during the tenth day of Race 4

The squally Jekyll and Hyde weather conditions and high wind speeds have meant some teams have needed to carry out maintenance. Seattle experienced a tear in its Mainsail, which needed to be repaired in 30-35 knots of wind and Dare To Lead too experienced some Mainsail wear, having to temporarily lash its mainsail to the boom. Says Dare To Lead Skipper, Guy Waites: “So here we are now, riding the storm with our boom lashed down to the traveller track, the Mainsail lashed to the boom as we ride the gusts of 50 knots under Yankee 3, with surfs to 20 knots. The sky scuds with cloud bringing rain, sleet and hail stones, interspersed with brilliant blue skies and crisp sunshine.”

One team was definitely enjoying the surf that was whipping up around them. Currently sitting in third place on the Race 4 leaderboard, Skipper of GoToBermuda, David ‘Wavy’ Imelman, said it had “been a busy, wet and exhilarating 24 hours.” Describing the feelings on board he said: “As the wind built, the boat speed increased and the excitement on and below deck increased. As usual cheers followed each good surf. It never gets old. A 70 foot beast flying down a wave, spray coming out the sides, the hull humming and the crew holding their breath. Helm desperately trying to prolong the surf, while also reading boat speeds. It really never gets old!” 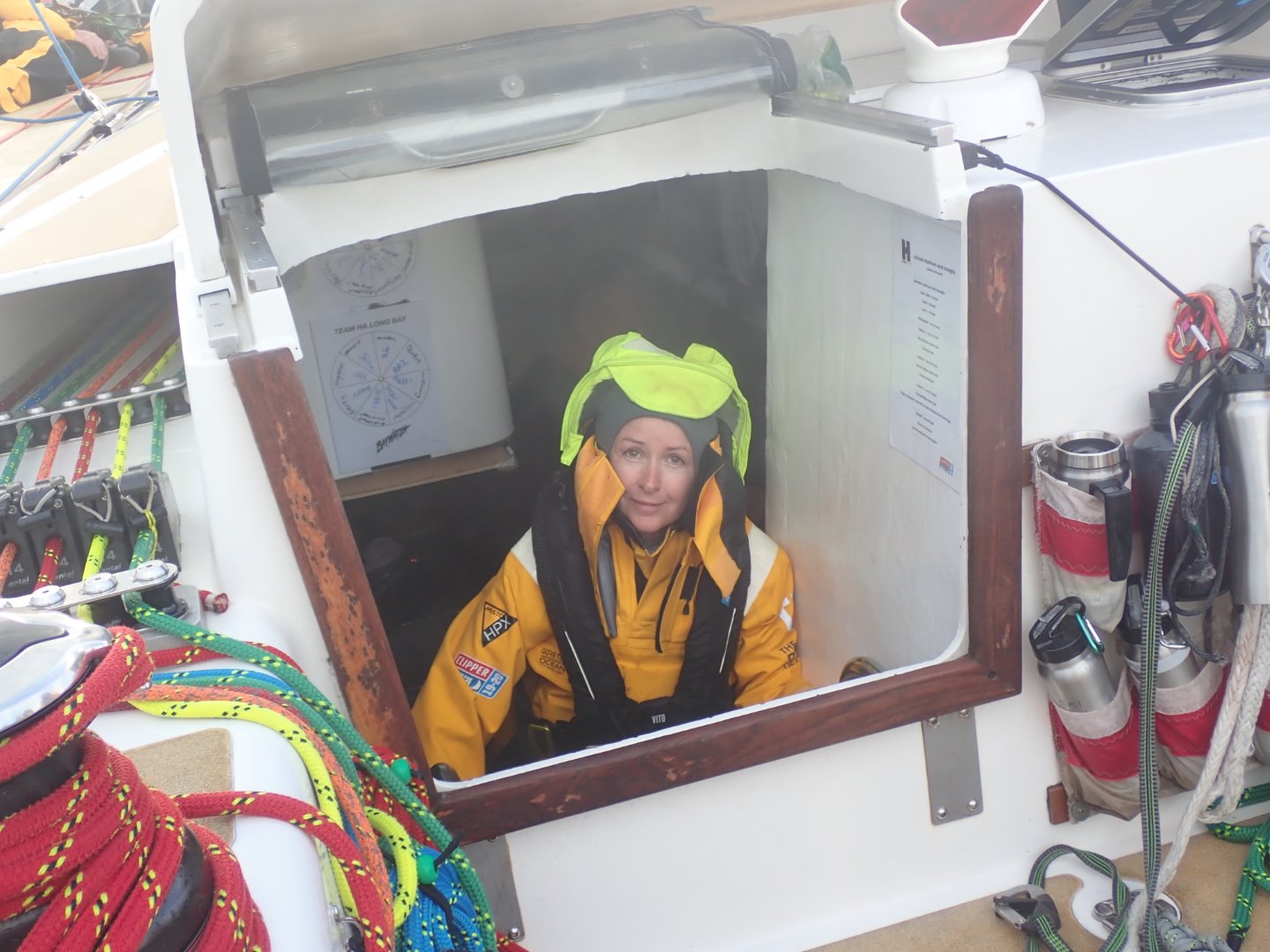 Image: Crew layer up in the Southern Ocean on board Ha Long Bay Viet Nam

And Skipper of Imagine your Korea, Dan Smith, celebrating a special day on board, reported in with a squall report of 70 kt gusts. He says: “With the boat screaming along at 18 knots on a trail of glowing plankton lighting up the sea, this is a good place to spend my birthday.”

Unicef is now back racing, after safely getting crew member, Andrew Toms, to shore in Durban last night. The Clipper Race office expressed its gratitude to the National Sea Rescue Institute for all its support over the past few days and also to Clipper Race crew member, Rob Stewart, who kindly arranged Unicef's gas and food supplies so they could turn around quickly and head towards Fremantle.

The Scoring Gate results are in on Day 9 of Race 4: The Marlow Southern Ocean Sleigh Ride. The Scoring…

Leading the charge to Fremantle, for a fourth consecutive day, Qingdao held off Ha Long Bay, Viet Nam to cross the Scoring Gate first and stake a claim on the first bonus points of Race 4: The Marlow Southern Ocean Sleigh Ride.“The day started in…