Following a week of close racing in the Southern Ocean, Clipper Race teams are getting more tactical as the race leaders approach Waypoint Mitchell, south of Tasmania, and prepare to head north to Sydney.

The eighth day of Race 4: The ClipperTelemed+ Tasman Test has seen no change at the top of the leaderboard with both of the Chinese teams continuing to lead the pack. Retaining its advantage on the rest of the fleet, Qingdao enjoys its second consecutive day in first place, some thirteen nautical miles ahead of second placed Sanya Serenity Coast.

For Sanya Serenity Coast’s Australian Skipper, Wendy Tuck, approaching the significant race milestone of Waypoint Mitchell is met with mixed feelings, as she says: “The corner [of Tasmania] is getting closer, it will be such a boost to finally hit the home run towards Sydney, the excitement is growing.

“Even though we are looking forward to going north, it’s always a tad sad to be leaving an ocean behind, however there will be enough challenges sailing up along the coasts.”

Visit Seattle holds onto third place despite a challenging day for Skipper Nikki Henderson who, with support from the crew, led repairs to the mainsail after one of the top battens broke. She explains: “The crew hoisted the tri-sail (tiny bullet proof storm mainsail) and we proceeded to sail under it and the Yankee 1 all night in the right direction so it actually didn't hurt us so much.

“I just have to say how brilliant it was to have such an excellent shore support team. Thank you also Mark (Clipper Race Director) for including Tri-sail training in the Level 4 syllabus - it definitely came in handy that everyone knew exactly how to hoist it.”

Despite little change in the leading positions, places continue to change throughout the rest of the fleet with Unicefnow in fourth place, Dare To Lead in fifth andPSP Logistics racing its way up to sixth from ninth place yesterday.

Pleased with progress,PSP LogisticsSkipper Matt Mitchell says: “We are really putting some pressure on the guys in front now, the team, including the boat, has been working super hard making sure that we get every ounce of speed out of her.”

Dare To Lead Skipper, Dale Smyth, adds: “The weather on the eastern side of the island [Tasmania] is going to be interesting and the race positions are by no means defined at this stage.

“It feels strange to actually be leaving the Southern Ocean, it has been our constant companion since Punta del Este, Uruguay. “ 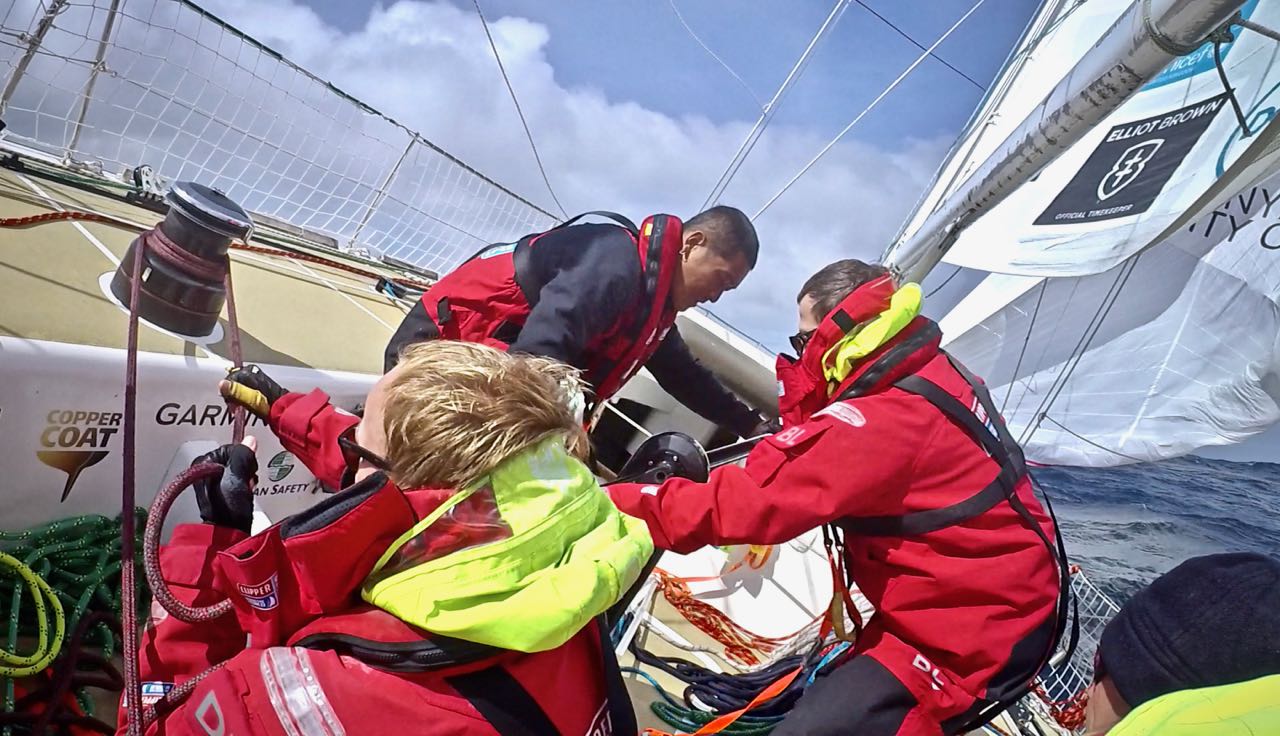 Towards the back of the fleet, racing remains competitive for Garmin, which has slipped down to seventh from fourth yesterday, GREAT Britain in eighth and Liverpool 2018in ninth. GREAT BritainSkipper Andy Burns reports: “I am encouraging everyone onboard, including myself, to work as hard as we possibly can to make this happen.”

HotelPlanner.com follows in tenth with Nasdaq,which has been struggling to determine which gybe will be most efficient for the Tasman waypoint, in eleventh.

Looking ahead, once teams round Tasmania focus will shift to the Scoring Gate with race points and positions expected to change frequently as tactics amidst the close racing play out up the coast.

According to Simon Rowell, Clipper Race Meteorologist, weather conditions will also begin to change as the fleet rounds Tasmania. He says: “As teams head for the Bass Strait, wind will have dropped off as the middle of the high goes over the fleet. I expect that by Tuesday the fleet will be going upwind, probably all the way to Sydney.”

The first episode of the Clipper 2017-18 Race's official documentary series, Race of Their Lives 3, is airing tonight and Monday on Sky Sports Arena in the UK. Click here for all episode timings.

Don't miss a beat of the action! The Clipper Race’s award-winning official documentary is back with The Race of Their Lives Series 3, with the first episode airing tonight, from Saturday 9 to 11 December, on Sky Sports Arena.This first of seven hour long action-packed…

Following an intense day of racing on the sixth day of Race 4: The ClipperTelemed+ Tasman Test, it can be revealed that an incredible thirteen seconds separated the top two teams, and just three minutes 16 seconds separated top three teams, in what has certainly…