It has been a day of contrasts for the fleet on Day 9 of Race 4: The ClipperTelemed+ Tasman Test. After surfing down waves at 20 knots in the Southern Ocean, and rounding Waypoint Mitchell (the race mark that took the fleet South of Tasmania) to head north, the fleet now faces a patch of light winds which is hindering progress towards the Scoring Gate.

With Qingdao, Sanya Serenity Coast and Garmin in Stealth Mode, Visit Seattle holds first place this morning and on board, Skipper Nikki Henderson is getting to grips with the contrasting conditions: “Life onboard couldn't be further from what it was a day ago - from 20 knot surfs, big winds, spray, rain and clouds to flat calm seas, bright sunshine, barely any wind (naturally again coming from the wrong direction) and about a million sail changes.”

Whist on board Qingdao, Skipper Chris Kobusch explains why the team chose this moment to activate Stealth Mode: “Previous races have shown that the first few boats get stuck in light or no wind and the rest of the fleet sees them on AIS (Automatic Identification System) or the position reports and then sails around those poor guys.

“So, we thought by going into Stealth Mode we might get stuck (which we did for most of the day), but hopefully everyone else behind us is following us into the light patch of wind. Sanya Serenity Coast seemed to have a similar idea and was off the radar shortly after us.”

Unicef is in second place this morning with PSP Logistics in third and Dare To Lead just two nautical miles behind in fourth. Tactics remain at the forefront of the Skippers’ minds with PSP Logistics Skipper, Matt Mitchell, saying: “There could be more tactical decisions coming up as we decide how to play the last few hundred miles.”

Dale Smyth, Skipper of Dare To Lead, adds: “It’s going to be very tricky working clear of this windless area and then an upwind slog to Sydney so the game is far from over.”

On board Liverpool 2018, currently in seventh place, the crew is welcoming the change in conditions and using the calmer sea state to its advantage as they recover from a busy eighth day of racing. On board Nasdaq, currently in eighth, the team continues to work hard to make up some miles on the fleet despite spending some time dealing with a rip in its Code 2 (mediumweight spinnaker) and Skipper Rob Graham commented: “The big lesson learned today is that when stuff happens, you have to find a way to deal with it.” 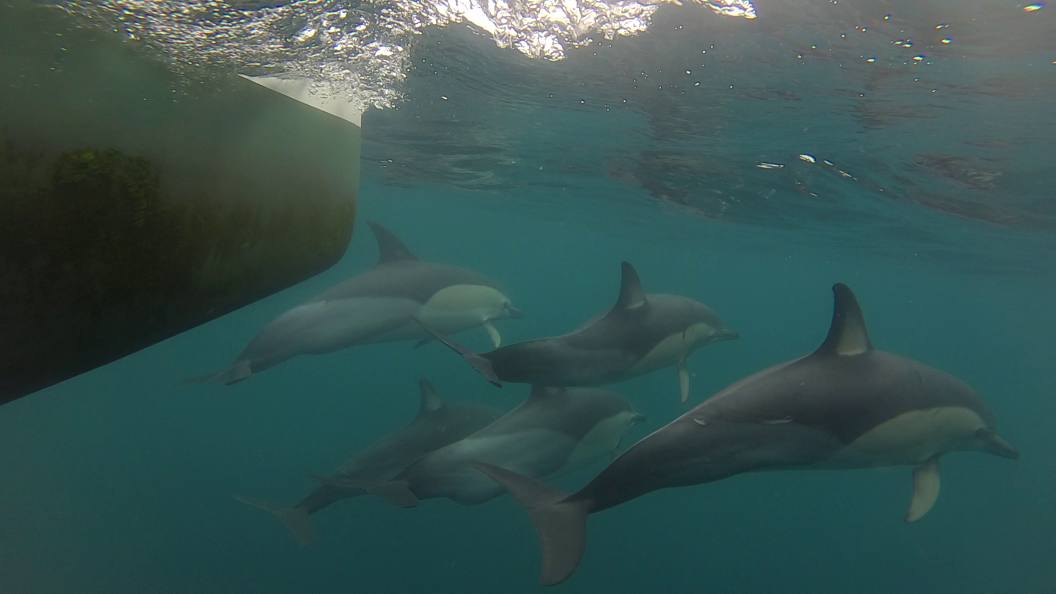 Photo: A pod of dolphins captured on a Garmin Virb off the coast of Tasmania. Taken by crew member Jerry on board Garmin.

Looking ahead, the Scoring Gate will offer the next opportunity for teams to score extra race points and it will be interesting to watch which teams decide to head for the Scoring Gate and which decide to press on towards Sydney in hope of reaching some stronger winds which are forecast to help boost them through the Bass Strait.

The first episode of the Clipper 2017-18 Race's official documentary series, Race of Their Lives 3, is airing tonight on Sky Sports Arena in the UK. Click here for all episode timings.

As the close racing continues in the Southern Ocean, the leaderboard positions continue to change with Qingdao retaking the lead on day seven of the The ClipperTelemed+ Tasman Test. With less than 20 nautical miles separating the top three teams, the next 24…