The Sailing City • Qingdao Cup officially drew to a close with an extravagant prize-giving ceremony hosted by the Qingdao Organizing Committee.

Over three hundred crew, supporters and officials gathered at the Seaview Garden Hotel in the Host Port city to congratulate the winning teams and celebrate the Qingdao crew’s arrival ‘home’.

Qingdao is the Clipper Race’s longest standing Team Sponsor and Host Port so the organizers are well-rehearsed for prize-giving and really know how to put on a show. Before Vice Mayor Luan Xin welcomed the Clipper Race crew back to the city, performers from the Laixhou Zhonghua Martial Arts School entertained the crowd with an acrobatic display entitled ‘Golden Monkeys’ Celebration of the Spring Festival’. The youngsters drew gasps from the audience with their headstands and human tower in a performance celebrating the Year of the Monkey in China. 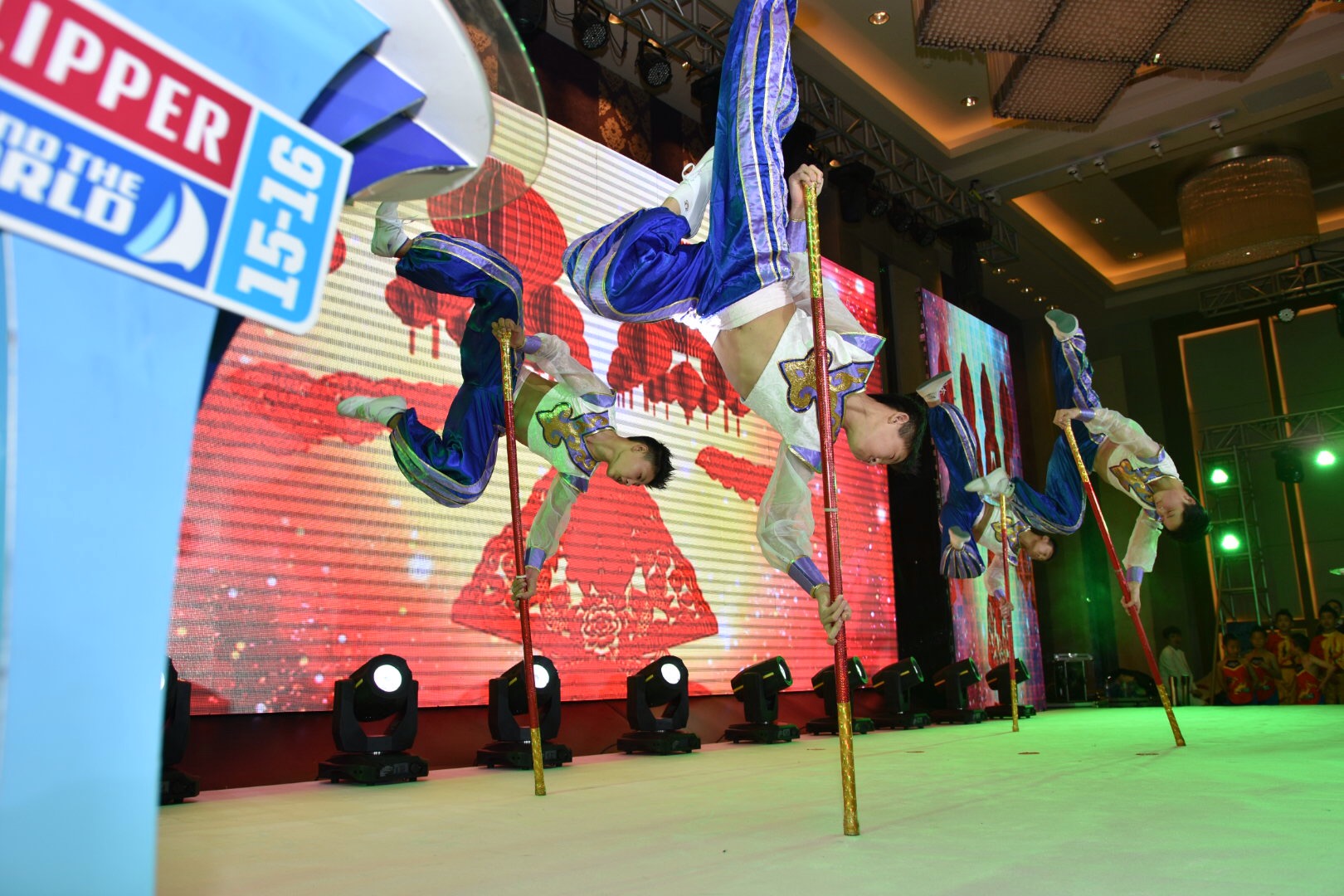 Race 8 winner Derry~Londonderry~Doire, dressed in the matching blazers the crew had made following their maiden victory into Da Nang, took to the stage to rapturous applause once more. The Northern Irish entry managed a clean sweep, picking up a maximum total of 17 points, which also saw it rise up the Overall Race Standings to second place, leapfrogging GREAT Britain.

Stepping down from the stage, Sally Spence, who raced on board Derry~Londonderry~Doire in Legs 4 and 5, exclaimed: “This is amazing! I can’t quite believe that my race is over. There are times it was so tough, but the last couple of results made all the hard times worthwhile. I’m going to be sad waving the crew off on Sunday but I’ll be going to Derry-Londonderry for the stopover and hopefully celebrating with them again there.” 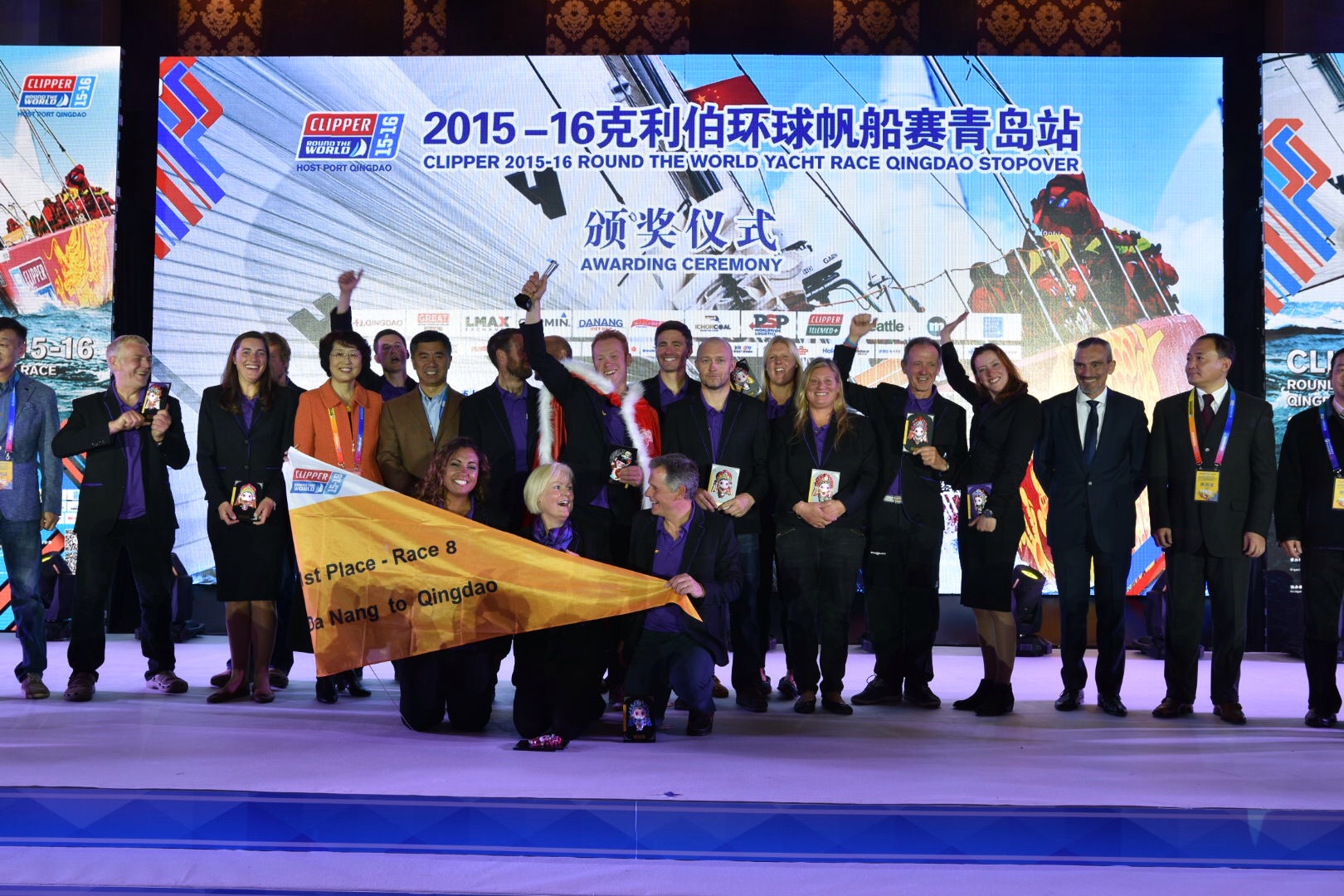 Second placed Garmin had another impressive race, collecting two points at the Scoring Gate and narrowly missing out to Derry~Londonderry~Doire after a close contest in the closing stages. After picking up the team’s second red pennant of the race. Leg 5 crew member Lucie Ward said: What an incredible team. I’m just starting to realise how much I am going to miss my team mates. They have made the experience for me and it will feel hard not being on the boat now. I know they have gold in their sights though. Definitely.” 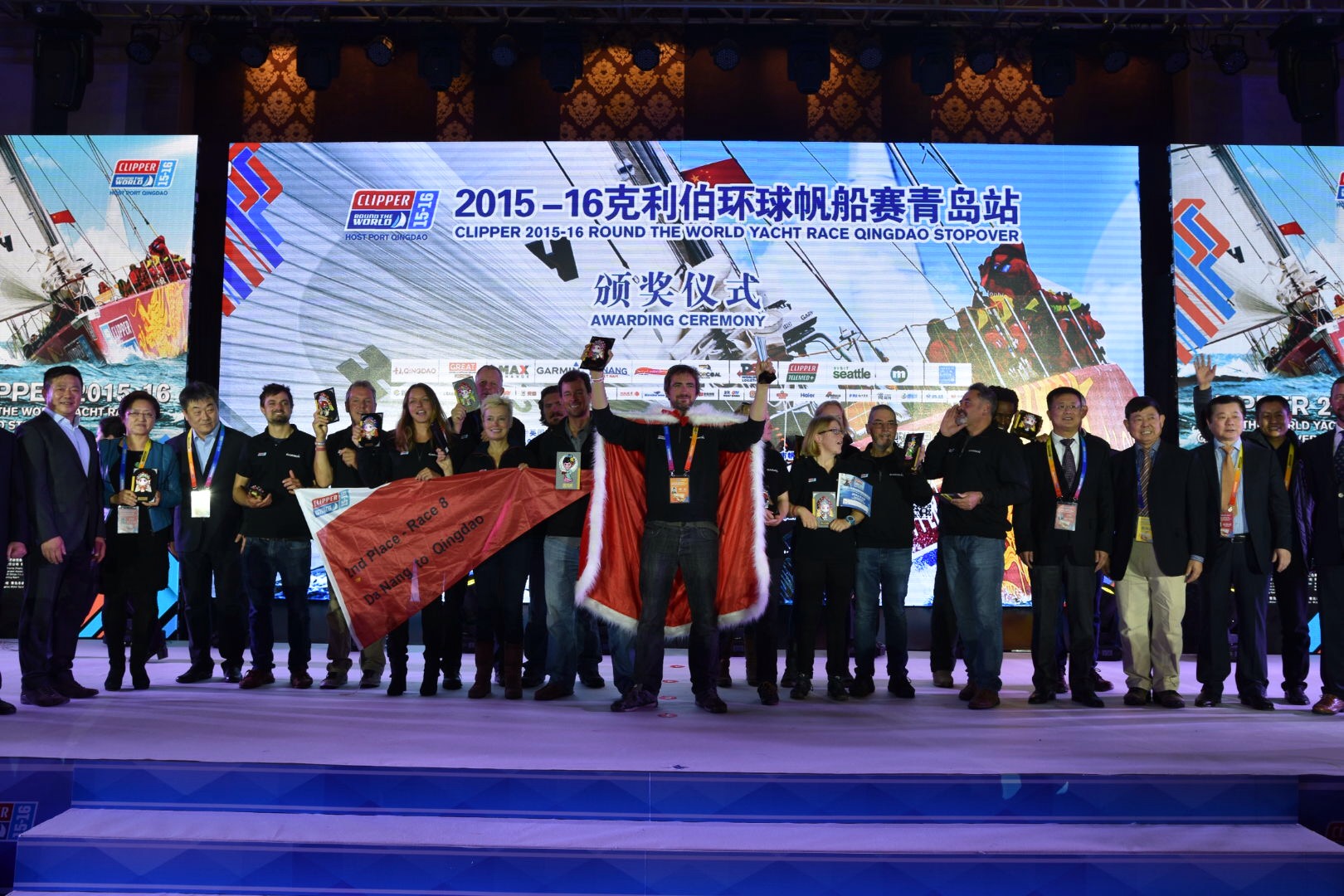 There was a double award on the night for Skipper Olivier Cardin and LMAX Exchange who, on top of taking the final place on the podium, also won the Stormhoek Social Spirit Award sponsored by the Official Wine Partner of the race.

Round the world crew member Adrian Roberts said: “We’re obviously very pleased to be back on the podium. We’re a competitive team and we do everything we can in every single race to win, and we will continue to do so. We’re still leading but we certainly feel threatened and we have to work harder and to get the top results. The competition is getting stronger all the time. It makes it more exciting I guess!” 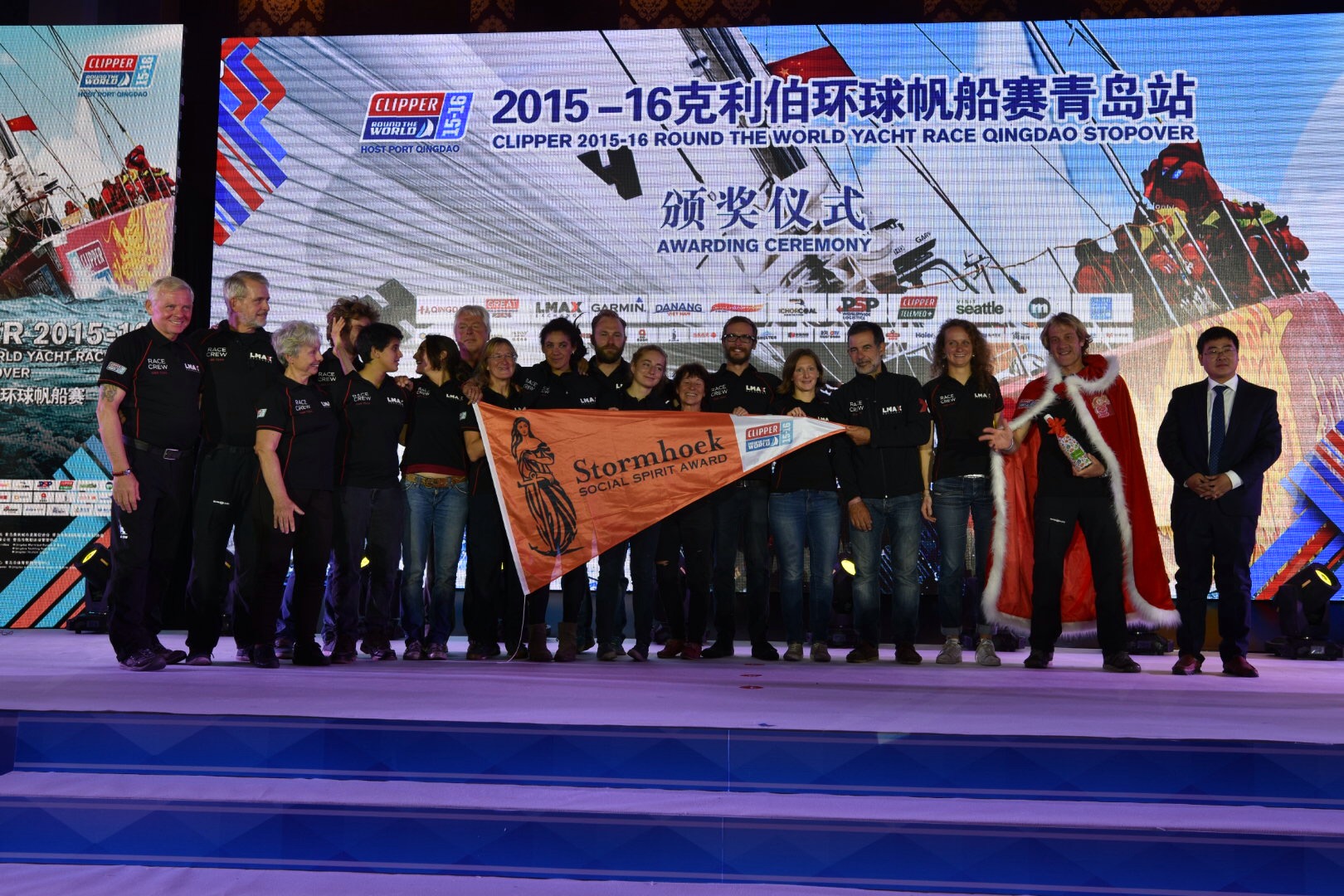 On their reasons for selecting LMAX Exchange this time, Stormhoek Wines said: “When the full facts became clear about Skipper Olivier and his crew’s decision to suspend racing on their way to Da Nang, it shocked everyone. But their actions, in putting their own ambitions aside and making the decision to board the seemingly abandoned yacht only to discover the deceased sailor, epitomises what the Social Spirit Award is about: team spirit, seamanship and strength in the face of adversity. Our thoughts are with the sailor’s family and also with LMAX Exchange whose discovery brought them peace.”

At the beginning of the ceremony, Clipper Race founder Sir Robin Knox-Johnston thanked Qingdao for hosting the race once again. He told the crowd: “We really enjoy returning to the Clipper Race’s other home, here in Qingdao, to meet our old and valued friends. This is much more than just a stopover. After six races over twelve years we have developed a strong relationship.

“We built our fleet of 12 identical 70 foot yachts here, so we have invested back into the city. The combination of British Design and Chinese boat building skills here in Qingdao has resulted in a very strong fleet of seaworthy yachts, which has brought all the crew safely ‘home’.”

Clipper Race CEO William Ward presented the Qingdao Committee with a framed photograph of the Qingdao yacht racing, while the city gave gifts of Pekind Opera Dolls to the winning teams.

Before the band kicked off to finish the evening, the Qingdao team were also honoured on stage with a special award. Skipper Bob Beggs and his crew were given a crystal trophy for “displaying the Chinese people’s spirit of bravery, fearlessness and positive energy around the world.” 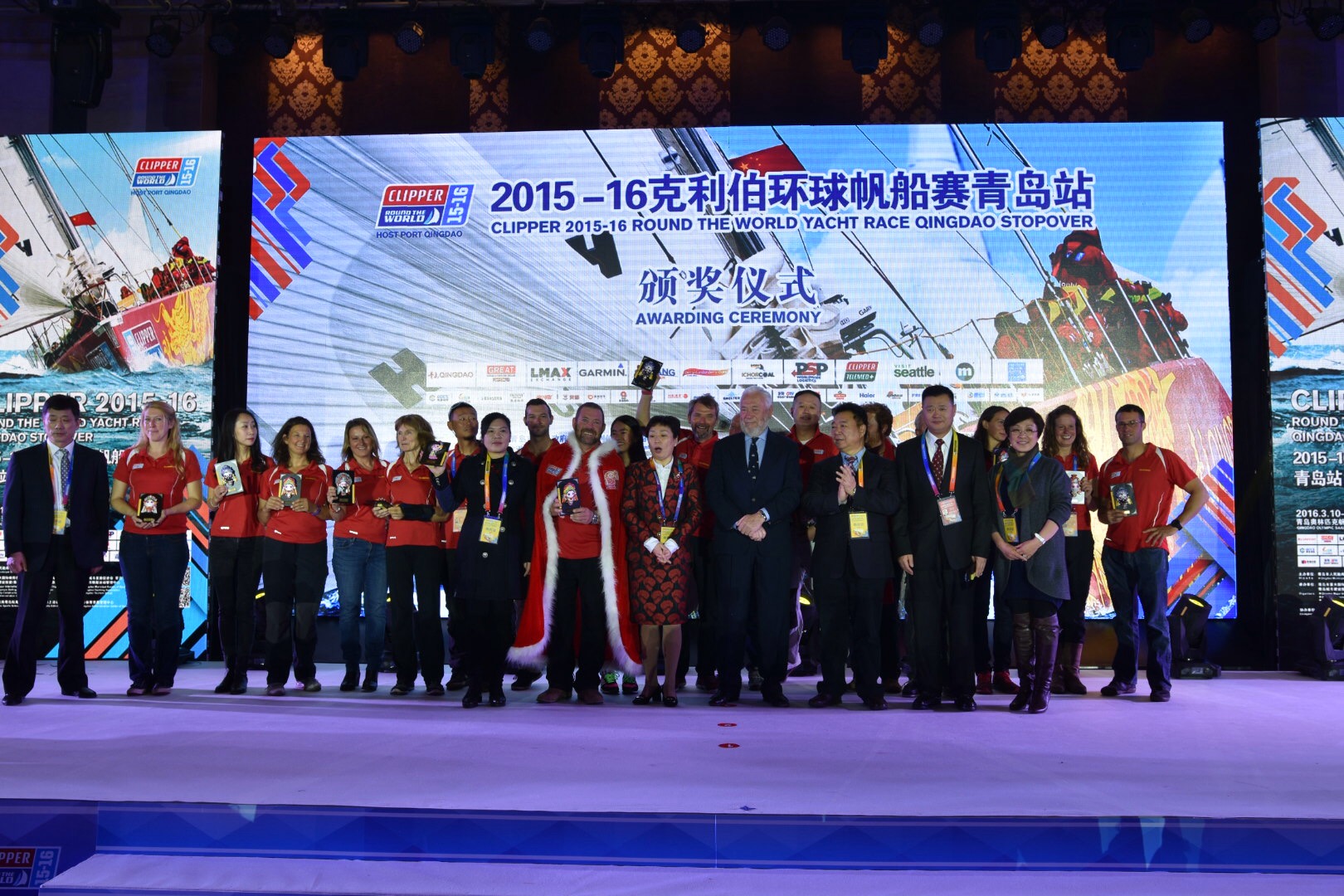 The prize-giving ended with the crew hitting the dance floor as the band played each of the team songs, bringing to and end another fabulous event in the Clipper 2015-16 Race. Next stop Seattle!

To view the full gallery of images, click here.