Following a festive stopover in Sydney, the Clipper Race teams are now raring to take on the iconic Rolex Sydney Hobart Race, which doubles as Race 5 in the All-Australian Leg 4.

A bucket list challenge in itself, this is where the Clipper Race feet will line up alongside some of the world’s finest racing monohulls and Maxis in front of a 150,000-strong crowd, plus a Boxing Day TV audience of millions, to participate in one of the world’s most iconic bluewater classic yacht races.

The only time Clipper Race crew get to pit themselves against non-Clipper Race competitors, this event is a truly memorable experience. With yachts competing in the 73rd edition of the race, the first challenge will be jostling for the position on the tightly packed start line. Skippers and crews will need all attention and awareness of those around them.

Once out of Sydney Harbour and through the Heads, the next test will be the Tasman Sea, where teams will need to quickly settle into their watch system to prepare for what comes next.

Clipper Race Director Mark Light explains: “With no margin for error during this sprint, crews will cross the Bass Strait (nicknamed the Paddock) which known for its Jekyll and Hyde personality and renowned for its ability to serve up some very challenging conditions referred to locally as Southerly Busters.

“Once crossed, the fleet will dart south towards Hobart. Teams cannot get complacent as they near the Derwent River, as soon they could be met with strong tides and fickle winds passing through Storm Bay which can add frustrating hours onto the race just 15 nautical miles from the finish line.”

Notoriously fast and fierce, there will be no time for Scoring Gates or an Elliot Brown Ocean Sprint to pick up bonus race points on the relatively short 628 nautical mile course so teams will be pushing to achieve the highest possible leader board position. Successful teams will need to make quick, smart tactical decisions to inch past the competition.

For some of the Clipper Race Skippers, the RSHYR is a familiar race. Sanya Serenity Coast Skipper Wendy Tuck will be competing for the eleventh time and was awarded the Jane Tate Memorial Trophy, which goes to the first female Skipper across the finish line, after winning the Clipper Race class of the 2015 Rolex Sydney Hobart Yacht Race during the previous edition of the Clipper Race. Chris Kobusch (Qingdao), Bob Beggs (Unicef) and Matt Mitchell (PSP Logistics) have also taken part in previous editions, whilst Sir Robin Knox-Johnston will be racing for a fourth time. 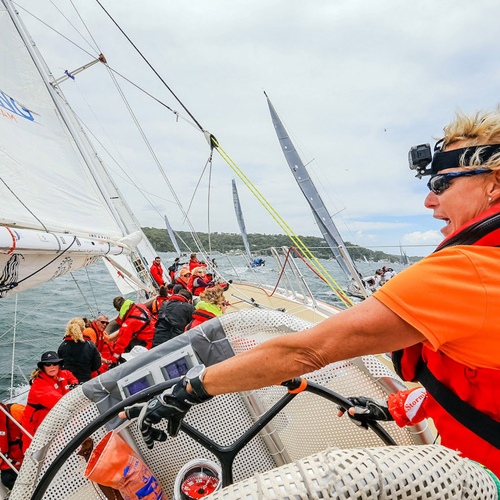 Sir Robin will be aboard one of the two Clipper 68 yachts taking part. Sir Robin will be the Navigator on Invictus Games Sydney 2018 GAME ON (CV10) will be crewed by British wounded, injured and ill Veterans, and will take on the Australian crewed Invictus Games Sydney 2018 DOWN UNDER (CV5), in what’s tipped to be an ‘Ashes on the Water’. For more information on Clipper Ventures’ relationship with the Invictus Games 2018 Sydney and to learn more about the crew on board, see the Clipper Race website.

Wishing you could be out on the start line in Sydney for the iconic RSHYR, too? Well now you can, virtually, from the comfort of your own armchair; in fact, wherever you are with an internet link, via laptop, tablet or mobile.

The Clipper Race has teamed up once again with the world’s leading and most experienced team of digital yacht racing game experts at Virtual Regatta and after a competitive Race 4, the virtual ocean racing platform is once again ready for the start of Race 5. Full details of all the features and how to play are available in the game website.

You can also follow the entire RSHYR action by following the official event website to see how the Clipper Race crew do against the rest of the field.

For most of the world, December 24 is Christmas Eve and a time to relax and celebrate. But for 102…

With the start gun for the 73rd Rolex Sydney less than 72 hours away, the Clipper Race crew have been run through all the finer details of taking part in the iconic bluewater classic which begins on Boxing Day.After welcoming the crew to…

The Clipper Race fleet could be in store for a record breaking trip to Hobart, with the long-range weather forecast…