It’s been less than one month since Greenings ran aground on the opening day of Race 3: The Dell Latitude Rugged Race. Whilst the rest of the fleet has now completed the race into Fremantle, Western Australia, the salvage operation to remove the yacht from the Cape Peninsula is also now close to completion.

At the time of the incident on 31 October 2017, all crew were quickly and safely evacuated from the yacht by local rescue services, the NSRI, with no injuries reported. After being contracted by the Clipper Race, Navalmartin, the Casualty Management Service provider of the Clipper Race’s insurers, promptly dispatched local Admiralty Expert and Surveyor, Peter Brinkley from Cape Town and instructed a salvage team to assess the situation and attempt the salvage of the yacht in the first crucial hours.

At this stage pollution control was of paramount importance for the team, so immediate action was taken to minimise any risk and remove fuel from on board whilst attempting to overcome the ingress of sand within the hull.

Following careful coordinated analysis of the situation by all interests and reviewing the state of the yacht (CV24) over the following 48 hours, it was unfortunately decided that the vessel would take no further action in the Clipper 2017-18 Race, and subsequently that it was beyond repair and would be assigned to be removed by appointed salvors. 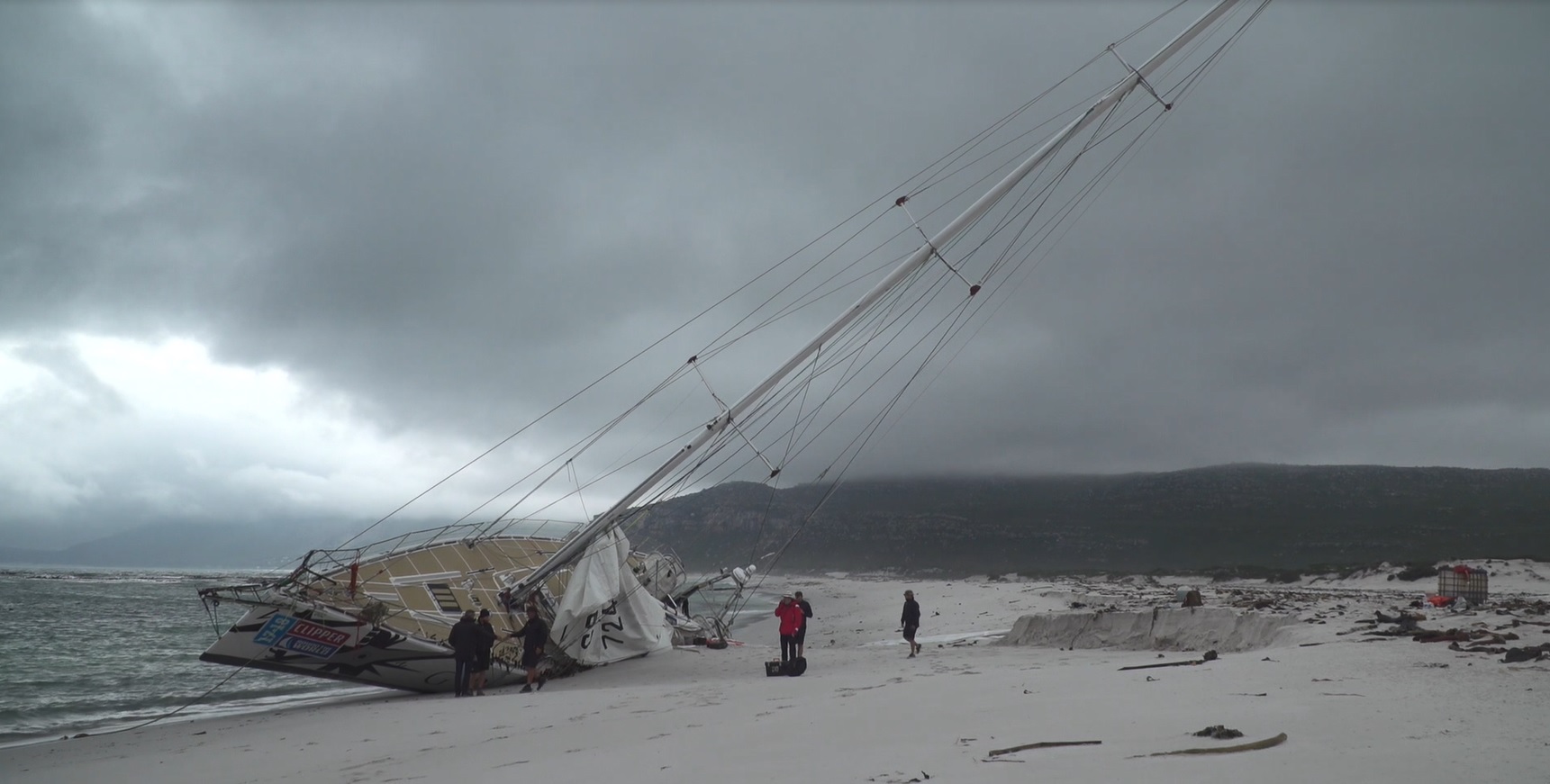 The removal contract was awarded to The Subtech Group/Ardent who specialise in the provision of world class marine services, including salvage projects throughout Sub-Saharan Africa. With an operating base in Cape Town, a team were quickly mobilised working with the South African Maritime Safety Authority (SAMSA), the Department of Environmental Affairs (DEA) and the casualty management team to oversee the clean-up operation and wreck removal.

Sir Robin Knox-Johnston explained: “Once the assessment had been made that the vessel was not repairable, our aim was very clear, we needed to deal with the situation quickly with the priority of minimising environmental impact and returning the beach to its original state. That was vitally important.”

Explaining the initial priority, Peter Brinkley, Chief Engineer attending on behalf of Navalmartin, the Clipper Race and its insurers, says: “The first task was to remove all the diesel fuel from the tanks. This was done quickly and no spillages occurred.

On the work that has been done over the past weeks, Peter adds: “We faced a number of early challenges to the removal which included obtaining access to the beach as it is in a very remote location, and also a bush fire started in the surrounding veld part way through the operation which delayed efforts for a few days.

“It was a priority to work quickly, the varying weather conditions only gave us small windows of time to carry out the task at hand. Time was working against us: We had to deal with the incessant influx of sand at high water brought in by the breaking waves and exacerbated by bad weather. We have to deal with the added challenge that no vehicles would be allowed though the reserve to access or move the yacht.” 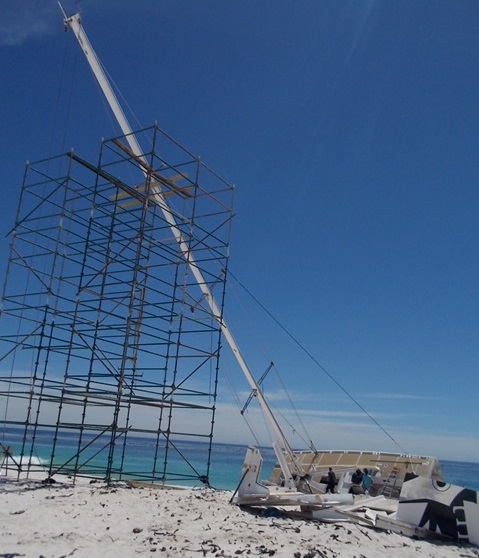 IMAGE: Erecting a tower to support the mast while cutting the hull

"Subtech opted to erect a tower made of scaffolding material to support the mast before we could start cutting the hull up from the forward and aft sections, dismantling components on board, and removing the engine, as the work progressed. The removed hull pieces were transferred into cargo nets and airlifted onto a truck at the roadside further inland for disposal.”

“We had some pretty big swells along the coast whilst the work was underway which did hamper the efforts significantly at times. At one point the waves reached four metres and battered the yacht, undercutting the scaffolding which sank approximately 400mm.” 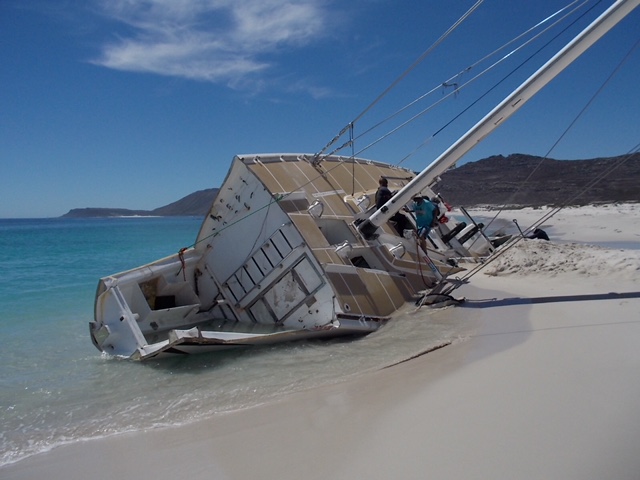 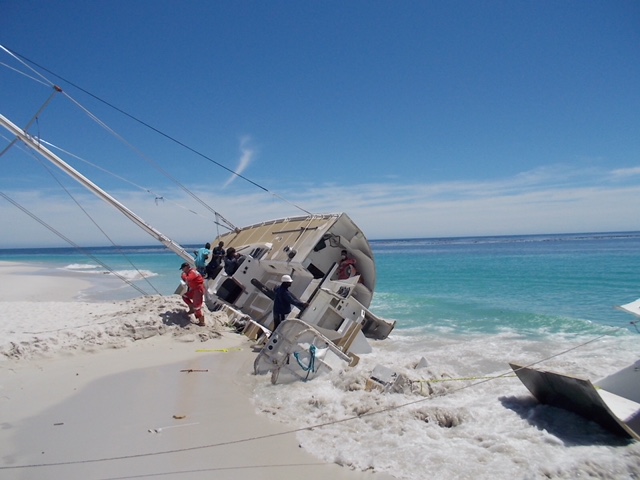 “The current situation is that the mast has now been lowered gently by using the scaffolding tower. Only the keel and some of the bottom and port side shell remain, and they are buried in the sand, however we expect these final parts to be removed in the coming days and the beach will then be restored.”

“Much of the hull and deck gear has already been air-lifted away from the site.”

IMAGE ABOVE: Mast has now been lowered gently using the scaffolding tower

Speaking about the loss of CV24, Sir Robin says: “She had completed two round the world voyages, one of which she was the winner, as LMAX Exchange, and had an unbeaten streak in the 2017-18 race.

“Many of our crew called her home and will have some long-lasting memories of their time on board. She was also an important member of the Clipper Race team and of course it’s always just desperately sad to see a fine vessel finish its story like this.”

Whilst CV24 is no longer a Clipper Race participant, the story thankfully does not end there for her crew as in true supportive race style, the rest of our teams will all welcome various Greenings crew aboard to continue their remaining race legs.

A full MAIB / MCA investigation is currently underway into the reasons for the grounding and we shall publish the findings as and when they are available.

The Clipper Race family, including all Race Skippers, have pulled together following the news that the Greenings yacht,…