The full Clipper Race fleet is now berthed at the beautiful Sanya Serenity Coast Marina following an exciting finish to Race 7: The Forever Tropical Paradise Race to Sanya, in China.

The 4,300 nautical mile race from the Whitsundays, Australia, began with plenty of drama for Liverpool 2018 with the team having to rendezvous with Dare To Lead early on in the race to receive urgent supplies to replace a broken water maker on board.

A wind hole in the later stages of the race contributed to Liverpool 2018 being overtaken by Visit Seattle, putting the team in seventh place 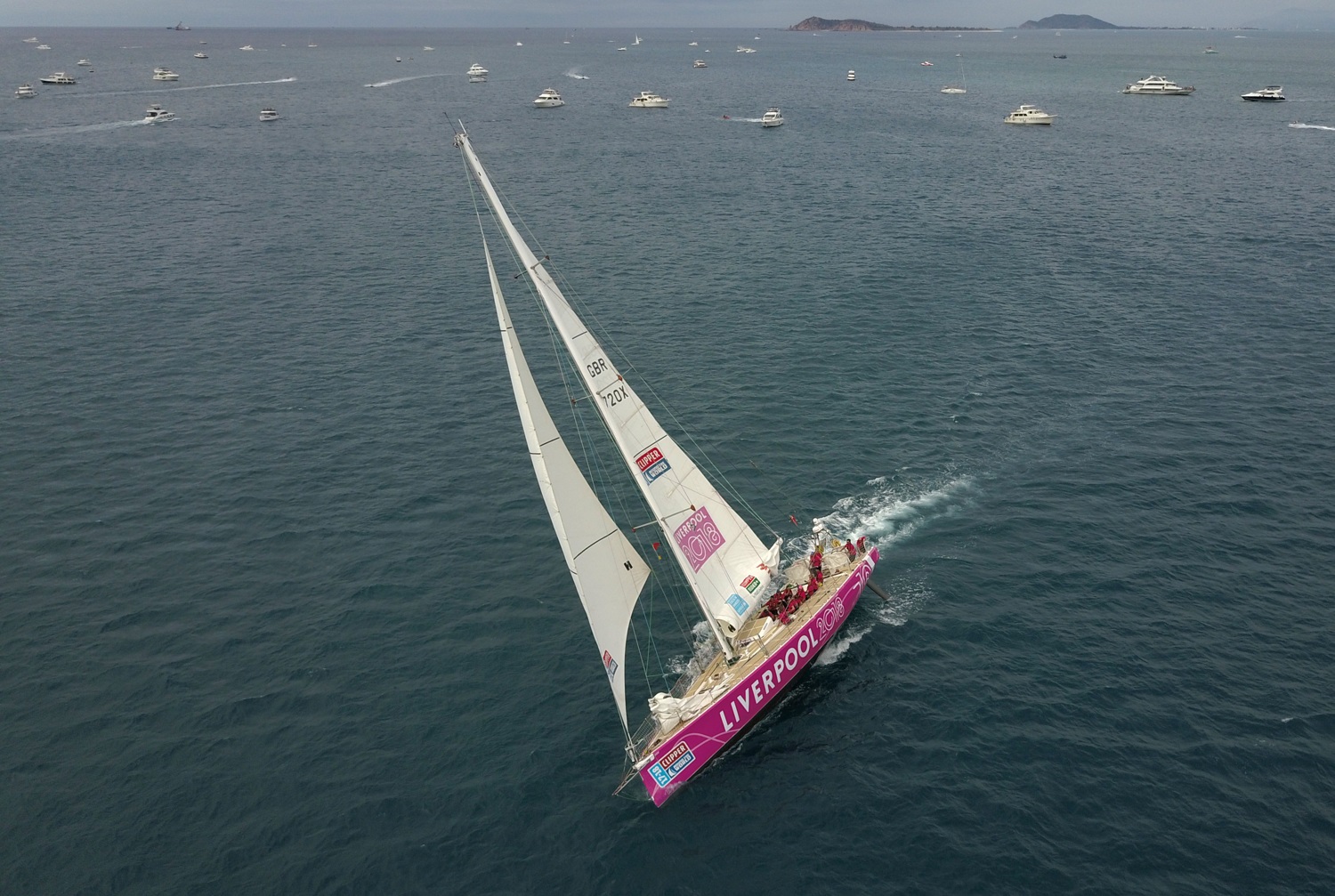 Shortly after arriving into the Sanya Serenity Marina, Liverpool 2018 Skipper Lance Shepherd said: “Race 7 was very technical – lots of wind holes but we enjoyed it. Crew morale was high, so it was good overall. It was a little bit frustrating watching the fleet catch us up from behind but we kept all but Nikki and her Visit Seattle team away. She played a blinder in coming round the outside.

“Sanya looks beautiful and I’m looking forward to enjoying all the activities it has to offer.”

Two hours after Liverpool 2018 arrived, Nasdaq and Garmin both rounded the peninsula at virtually the same time. Both teams had eighth place in their sights but in the end, it was Nasdaq which crossed the line first, five minutes ahead of Garmin.

Nasdaq Skipper Rob Graham said: “That was great, exciting right down to the last three-and-a-half minutes or so. It was very close for the last 20 miles. We had an issue with getting our spinnaker down so we sent our hobbit (Tom Boys) up the mast and we got the kite down and we just made it over the line ahead of Garmin. 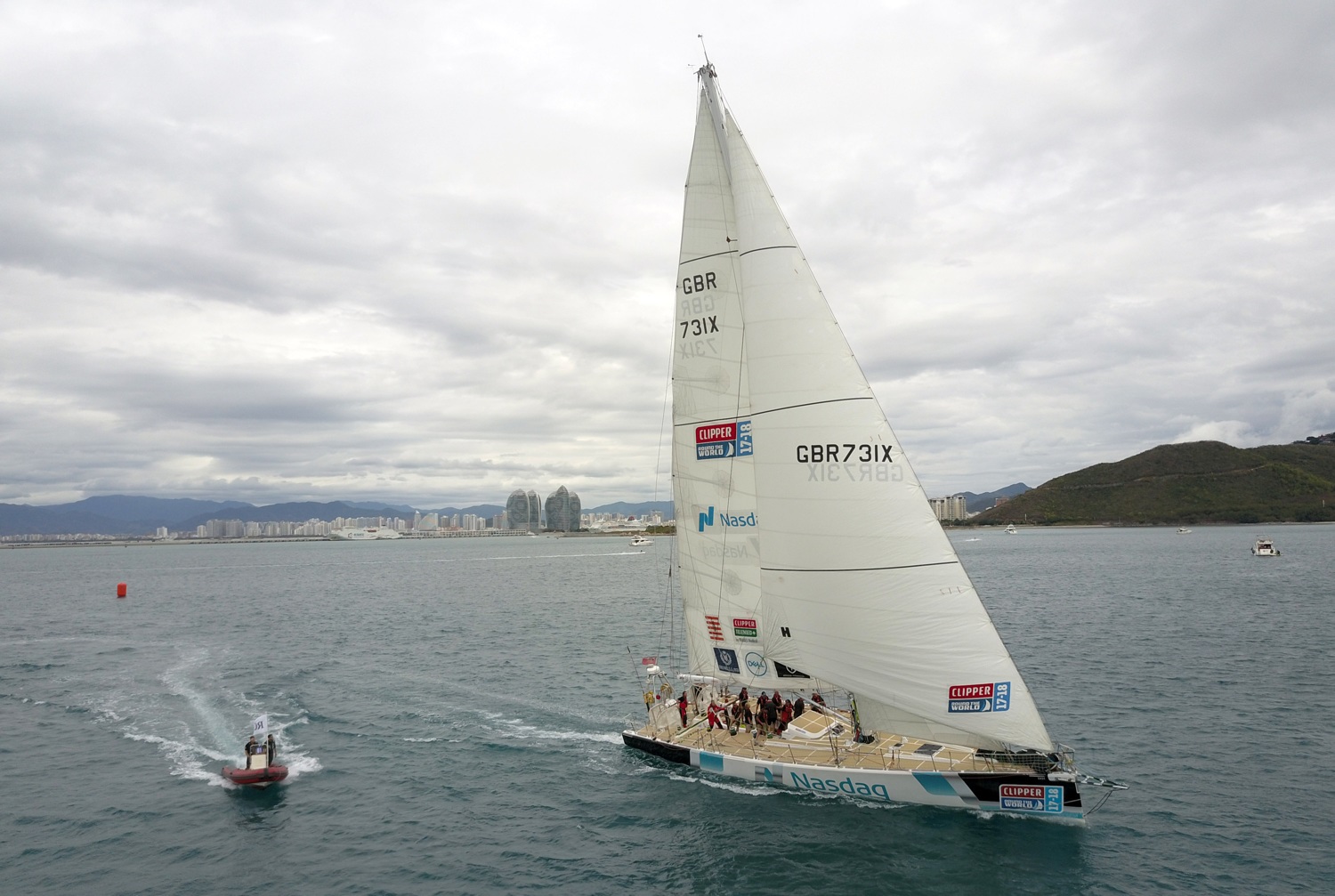 He also added: “Having my face up at Times Square for my birthday was a huge surprise – I’ll have to take a look at the photos once we’ve got the boat sorted out.”

The inshore victory capped off what has been a very solid race for Nasdaq, with the team going from eleventh to eighth in the final 24 hours racing, and it also adds four crucial bonus points to its overall total after being the quickest in the Elliot Brown Ocean Sprint, and the third team through the Scoring Gate. Nasdaq’s nine total race points equals its previous best haul from when the team came fourth in Race 5, from Sydney to Hobart.

Garmin also earned two bonus points in Race 7 after being second through the Scoring Gate. The bonus points were a welcome reward for the team after what was a tough race. 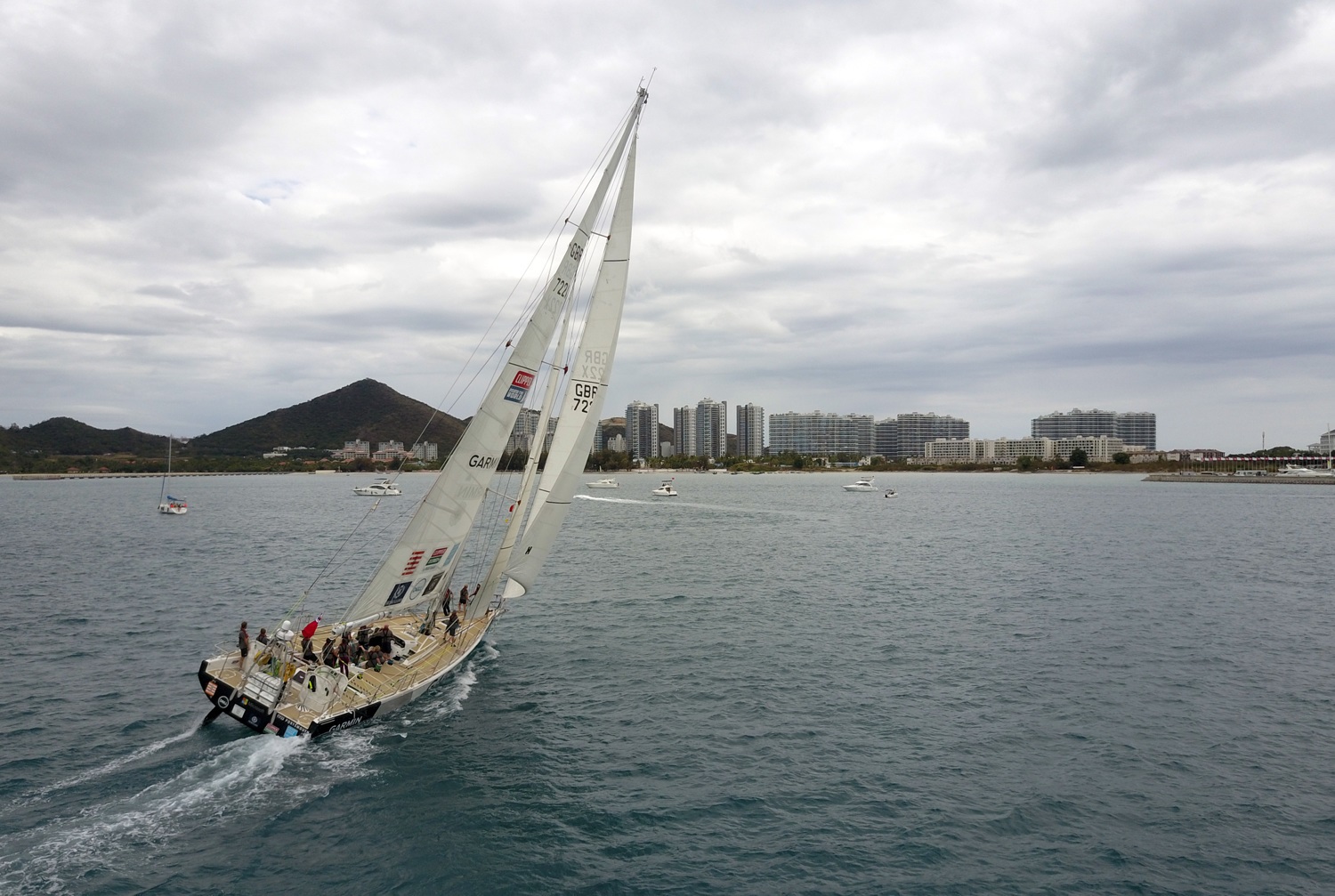 Arriving into port, Garmin circumnavigator Gerado Injoque, from Peru, spoke of his thoughts on the race, saying: “It was really good, we had great weather, really nice sailing most of the time but the heat was something really hard to cope with. In my opinion it was the hardest challenge it was really tough, even when you try to get to sleep it was so hot down there.

Skipper Conall Morrison explained: “It was really tough. We didn’t have the best start but we are all here in good health and happy to here. We had a nice race there at the end with Nasdaq, Garmin and GREAT Britain so it was pretty close, pretty tight with that. Over the last couple of days bringing the wind with us and catching the leaders, closing in the miles, was fun. It’s nice to be here in Sanya all at the same time. It’s really cool, I love the mountains and the big city.”

Greg Glover, Hotelplanner.com circumnavigator, said: “It was tough, you know it was hot but it was beautiful sailing. The weather was fantastic. It was great we had a lot of fun.

“I was really impressed by the coastline as we came up here, it was quite a rugged skyline then the high-rise buildings started popping up around the place. Sanya looks a bit like Hawaii, it feels really cool to be here.”

GREAT Britain completed the arrivals, crossing the line at 09:07:21 UTC (17:07:21 local). Whilst GREAT Britain will only collect two race points for the eleventh-place finish, the team will finish with a respectable four points after setting the second fastest time in the Elliot Brown Ocean Sprint. 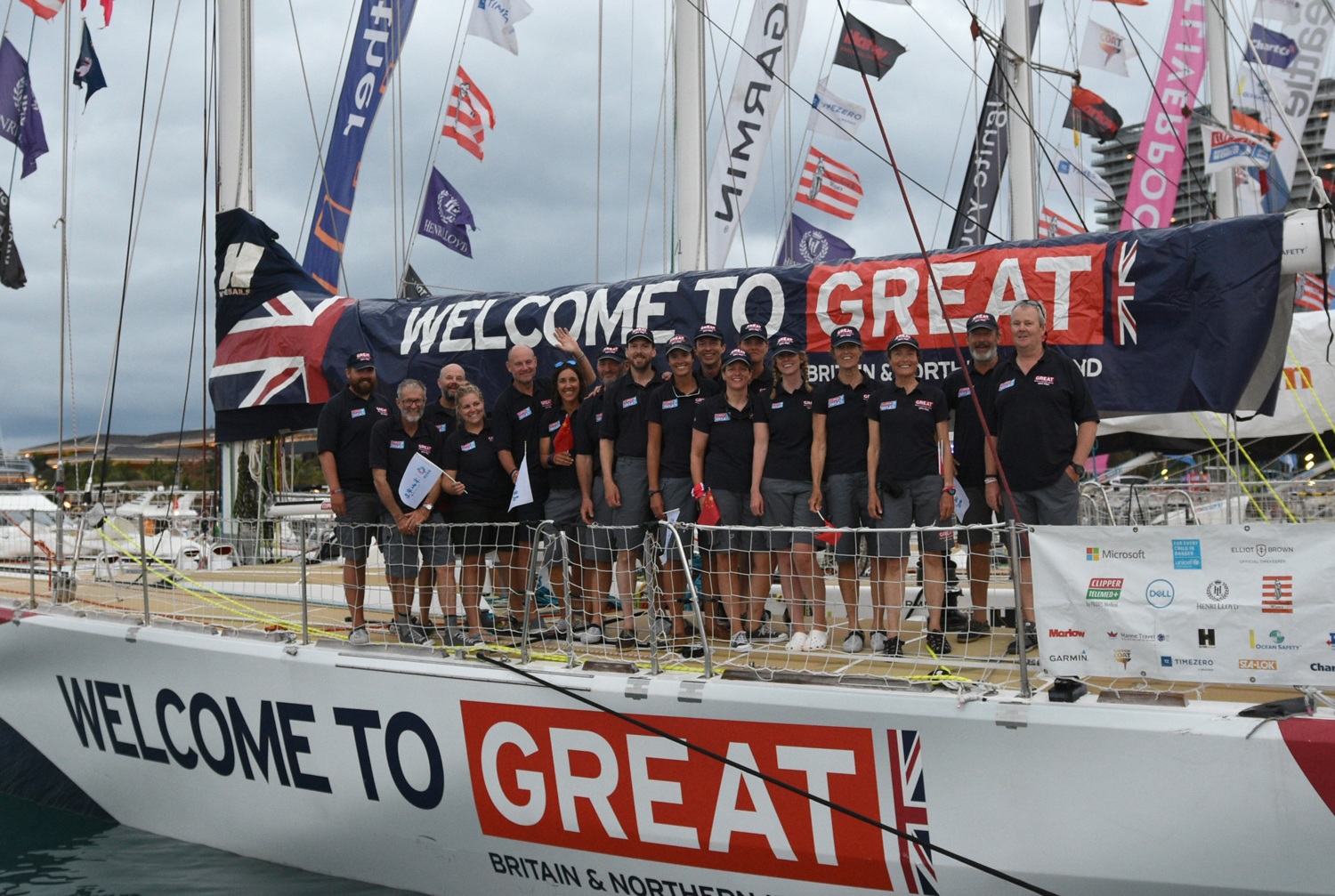 Next up for the Clipper Race crew will be the official Race 7 Prize Giving which will be held on Monday 26 February. As well as the presentation of pennants and awards, the crew will be entertained by traditional dancers and treated to dinner on the lawns of the Sanya Serenity Coast Marina Club Garden. Weather permitting, the Prize Giving will be shown on the Clipper Race Live page on Facebook.

Sunday will see the official open of the Clipper Race Village, which will be a hub of activity for both the public and crew to enjoy. From model yacht races to Lego building to Zorb Ball games, as well as a fabulous selection of local delicacies and cuisines in the food hall, the Race Village will make Clipper Race Sanya Stopover one to remember.

The Clipper Race Dome will also be open and will be where visitors can experience what life is like on board Sanya Serenity Coast via the power of virtual reality goggles or test their skills at the Marlow Rope Knot Tying Station.

Race 11 has been an exceptionally close contest, with a nail biting wait over the past few days for the…

It’s been an arrival to remember forSanya Serenity Coast, after the team claimed fourth place following an early morning arrival in its home port.The stars were still out when Skipper Wendy Tuck and her Sanya Serenity Coast team crossed the finish line at…

Unicef and Visit Seattle capped off a busy night of arrivals in Sanya, with the two teams taking out fifth…

Race 7: The Forever Tropical Paradise Race to Sanya, China, will finally conclude today after more than three weeks racing but light winds are causing a feeling of insecurity across the fleet as teams push hard in a slow drag race to the finish line.In…

PSP Logistics has been given a hero’s welcome to Sanya in China after claiming a maiden Clipper 2017-18 Race win.The…

Dare To Lead is celebrating finishing Race 7 in second place, after crossing the finish line at 18:17:39…