The rain gave way to blue skies and a good breeze for the start of Race 15 - the final race in the Clipper Race circumnavigation, taking the teams from Derry~Londonderry to London.

The fleet prepared early, decided on their various sail plans and lined up ready for the Race Start gun, before negotiating the start course of race marks and racing out of Lough Foyle.

Mark Light, Clipper Race Director, reported from Greencastle ahead of the start: “We have a ten minute, four minute and one minute countdown, and then we have Race Start. The fleet knows the course, so they will cross the start line, and go around a red channel mark, and then around an inflatable yellow, keeping both to starboard, then head out north and towards the west coast of Scotland. 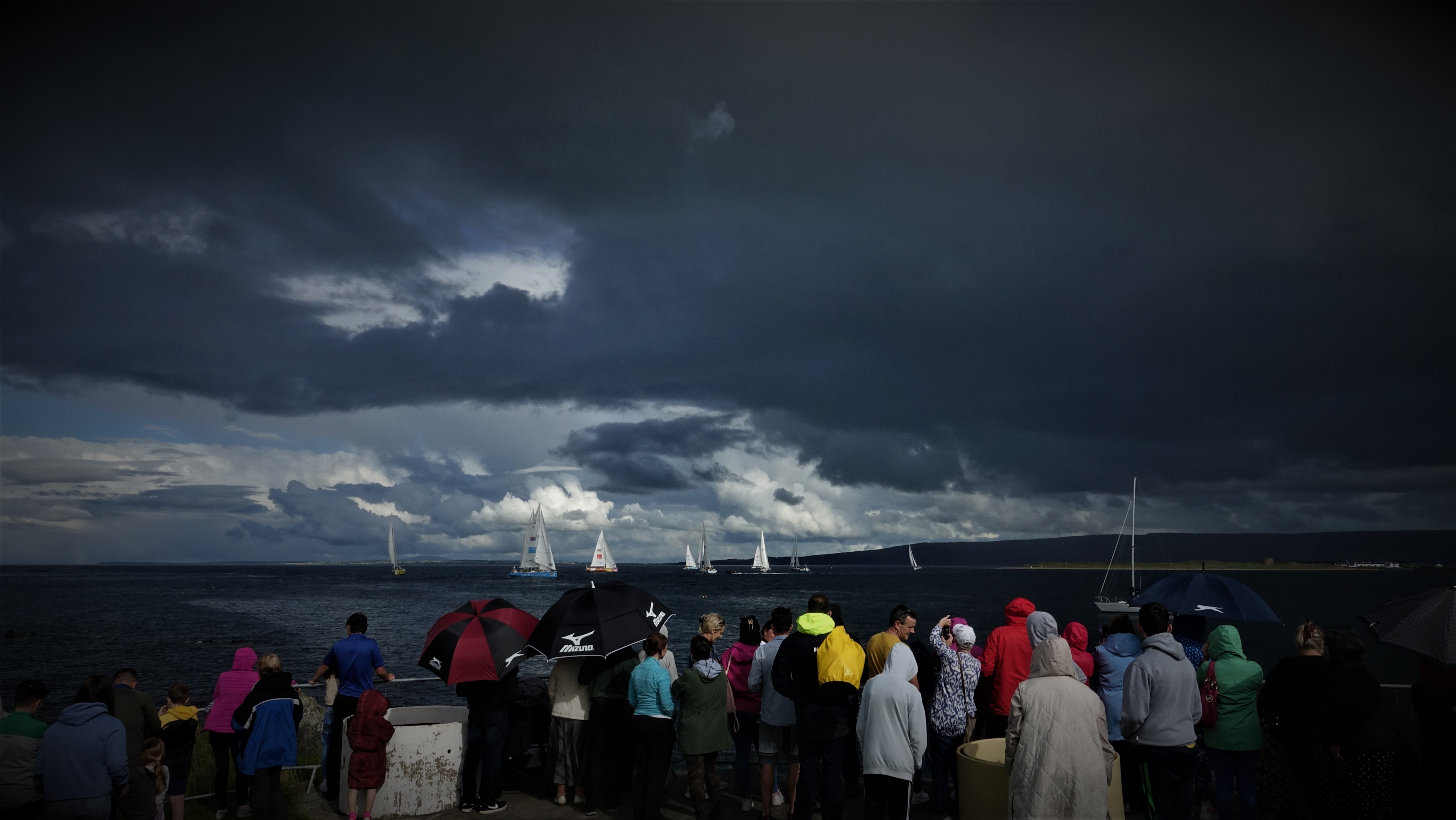 “The teams themselves have all lined up and selected their sail plans. The weather has turned into a beautiful day now so I'm hoping for a nice clean start.”

With an upwind start, the first across the starting line was Zhuhai, then Qingdao and WTC Logistics. Dare To Lead was on course side (OCS), crossing the line three seconds early, meaning the team had to go back and complete two penalty turns to exonerate itself before re-crossing the start line and rejoining the race.

Rounding the first mark in the lead was WTC Logistics, followed by Punta del Este then Qingdao. Punta del Este took the lead after the second mark. The fleet enjoyed some spinnaker sailing as they headed downwind, before the breeze became shifty and light. The tide in Lough Foyle was flooding at the very beginning of the race but turned into an ebb tide which helped to carry the yachts out of the Lough once the wind started to ease off. 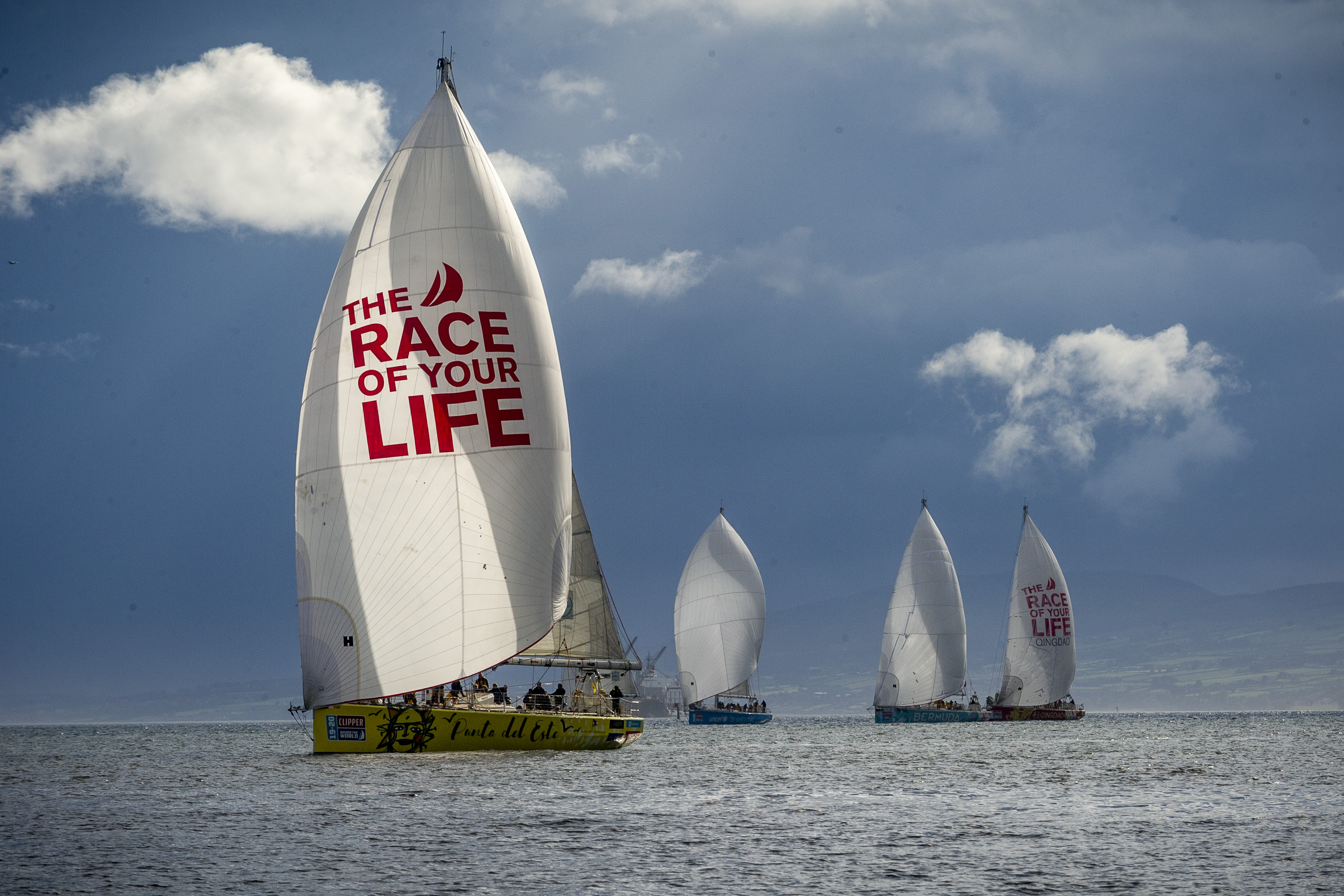 Dale Smyth, Deputy Race Director sums up the start of Race 15: “The start has gone really well. The fleet has a good upwind breeze and all yachts are quite close to the line. We had one OCS which means ‘on course side’ before the gun, so Dare To Lead had to turn around, complete two full penalty turns and then make its way back to join the fleet. We’ve seen the yachts beat up to the windward mark, they've gone around this mark and now we’ve seen some kites hoisted as the yachts head downwind beginning their final race.”

Sir Robin Knox-Johnston, Clipper Race founder, watched the action live from Greencastle. Speaking about the final race getting underway, he said: “It’s bittersweet seeing the fleet start its final race! It is wonderful to see the teams out there, they are all setting their spinnakers and really making a race of it which is great. But what will we do with ourselves now that the last leg is almost over!

“It is a good start line here, and it’s nice to give the locals a bit of a show. It’s great to see the boats competing on a proper start line, and in front of so many people.” 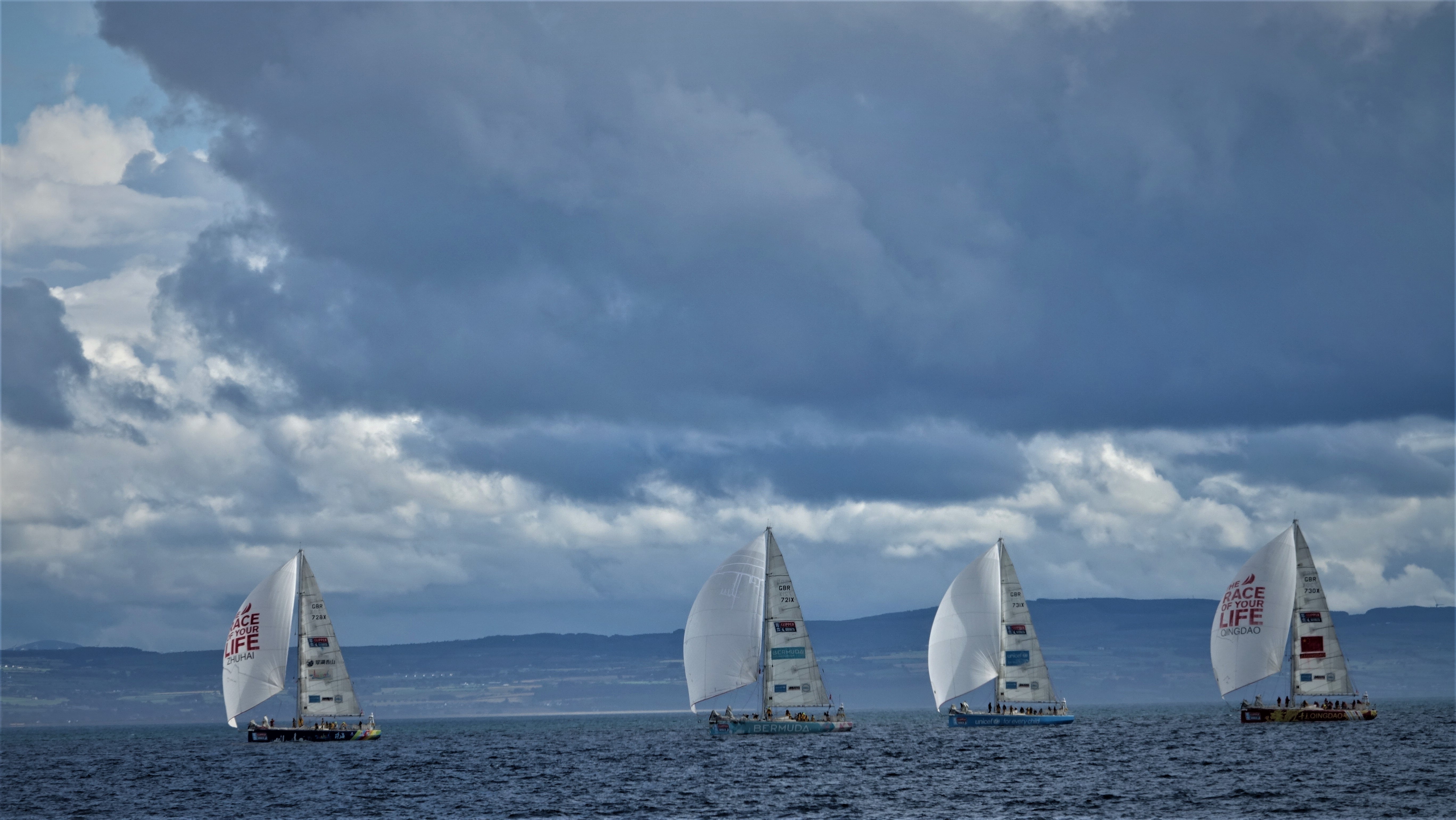 Once the race had started, Skipper reports of the line start rolled in:

Dave Hartshorn, Seattle: “What an atmospheric departure from Derry~Londonderry. Black clouds, lightning and some very close quarter sailing. Really pleased with our spinnaker hoist and Yankee drop at the mark. The crew really nailed the evolution which allowed us to gain a couple of places. London, here we come.”

Ian Wiggin, Unicef: “Well that was all rather exciting. With green fields, mountains and storm clouds as a backdrop the gun went on our final race to London. The racing was incredibly tight in the gusty and shifty conditions. The windward beat was fairly straightforward as we had speed and manoeuvrability. Our game plan of staying out of trouble worked well as we headed off down wind exiting Lough Foyle. The crew work on Unicef was slick and the whole experience was very enjoyable.

“We are used to racing in the middle of oceans, without other boats and without the confines of a river entrance. The whole thing was a great challenge and made for some interesting watching as other boats tried various sail combinations. The wind was so variable boats were on all kinds of sail plans and headings within a few miles of each other. We managed to avoid any drama thankfully so we will sleep easy tonight. We are expecting to have the Yankee 3 up this evening, but for now we are drifting around.

“Thank you Derry~Londonderry for an amazing stopover and the warmest of welcomes. We are all incredibly grateful.” Jeronimo Santos-Gonzalez, Punta del Este: “The last race has begun! The final journey towards the last stop on this edition of the Clipper Round the World Yacht Race. Punta del Este started with high speeds but behind the lines. We saw Dare To Lead taking a penalty for crossing the line early, ouch! By the first mark we were charging behind WTC Logistics and by the second mark we lost some ground to Qingdao.

“Our advantage came at the time of hoisting the spinnaker where we did a superb job and started to take the lead position. After a while enjoying the sight behind us, the wind dropped and everything went very variable for the whole fleet. This is the beginning of the beginning of the last race of this wonderful adventure.”

Mike Miller, Visit Sanya, China: “What a fantastic send-off. After an epic stopover, filled with Derry~Londonderry’s famous hospitality, more than a little laughter and quite a lot of hard work getting ready for the final push. We are now off on our way to London and the end of our Clipper Race adventure. The start, with its mix of wind holes and squalls was a tactical challenge, but it was a great spectacle, with all the boats together and the crowds cheering on the shore.”

Patrick van de Zijden, Zhuhai: “What a spectacle, and what a goodbye from the crowd in Derry~Londonderry, standing there in the pouring rain, waving us out while we were proud to lead the parade out all the way down the Foyle river.

“After a long time we were treated to a proper start and we were pleased to be first over the line. Thank you all for hosting us and Derry~Londonderry is definitely the best stop over of our race. Currently we are battling it out under drifting conditions.” 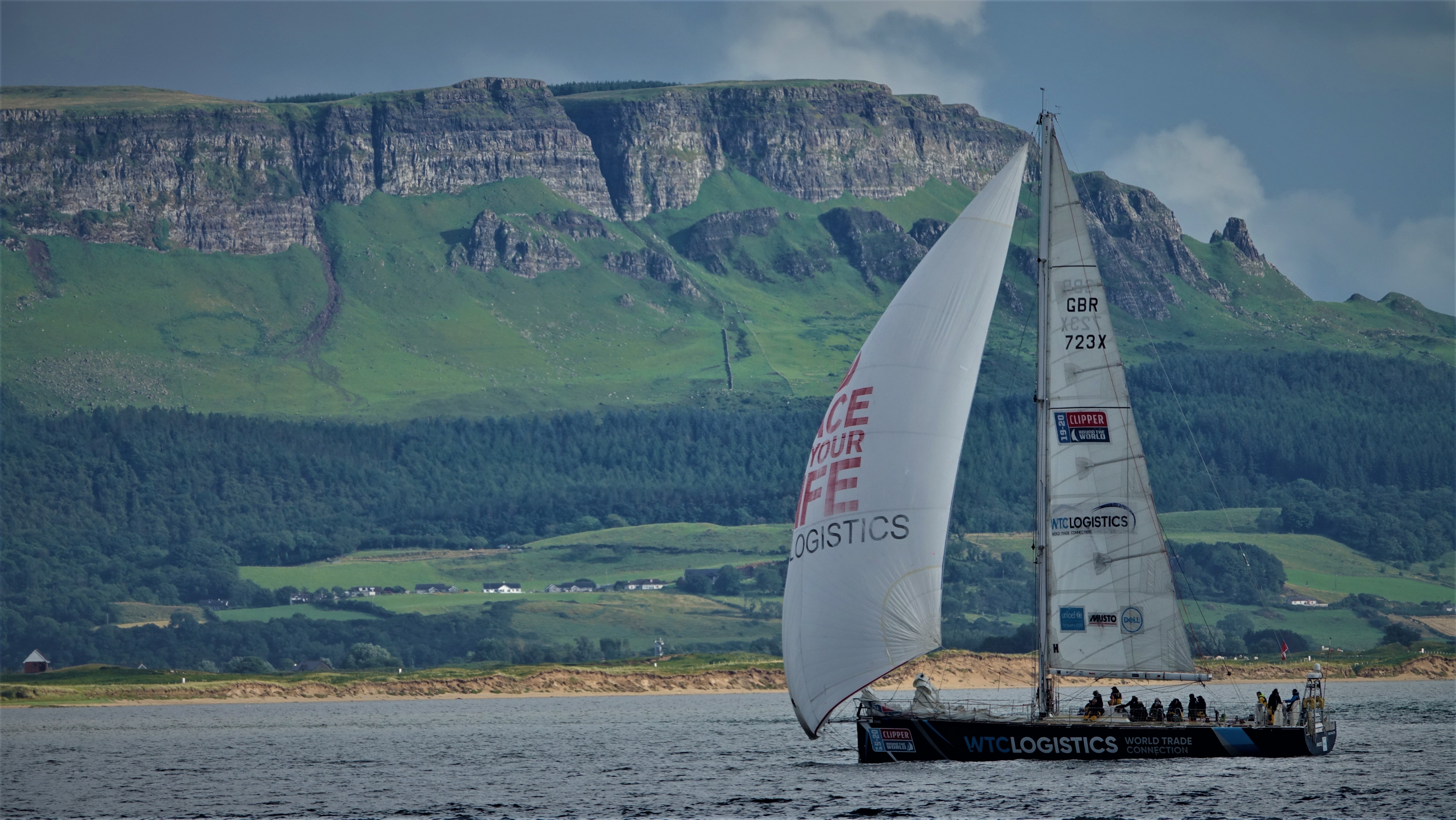 Chris Brooks, Qingdao: “Race 15 started fast and furiously to the windward mark. The team did great to round in third position as we approached downwind to exit the River Foyle. The pressure then dropped to round the third mark, leaving some complex manoeuvres and lots of sail changes and evolutions between the fleet. We are looking forward to entering the new pressure from the north west so we can all get racing again.

“Thank you to all the people in Derry~Londonderry who gave us such a warm welcome and turned out in great numbers for our departure.”