On a balmy summer’s evening, the Clipper Race teams who have arrived into Western Australia and a large number of supporters came together on Fremantle Sailing Club’s Sunset Deck to celebrate the results of Race 4: The Marlow Southern Ocean Sleigh Ride.

The teams, having spent three weeks at sea living in confined spaces, whilst racing at an angle for the 4,750 nautical mile journey across the Southern Ocean, delighted in exchanging tales and celebrating their achievements with the beautiful sunset in view and a live band playing.

The race was an intense game of cat and mouse for the front-runners, with first, second and third positions within reach for three teams right up to the wire. A gripping watch for everyone supporting the race as well as the crews themselves, aiming to reach Australia first. The vast ocean crossing presented huge waves to surf, squalls, the famously unpredictable Roaring Forties, and conditions ranging from freezing temperatures to the ever-frustrating becalming windholes.

The eight teams, which had completed the race, celebrated the prizegiving ceremony among family, friends and Clipper Race staff. Commodore Ron Greer welcomed all the teams to the special evening, saying: “It is my pleasure as Commodore of the Fremantle Sailing Club, to welcome you all - the crews, staff, the families who have made the journey to welcome the crews as they arrive and Sir Robin himself, we had a reunion yesterday and he hasn't lost any of his wit and charm. It is great to renew acquaintances.”

My congratulations to you all for doing it so well. Enjoy the Fremantle hospitality.”

Mark Light, Clipper Race Director, announced the race’s charity fundraising progress, revealing an impressive £200,191.90 has been raised for Unicef UK during this edition so far. Charity fundraising is a big aspect of the race for all teams and during this edition, the Clipper Race hopes to pass the £1 million mark of funds raised so far, since partnering with Unicef UK. 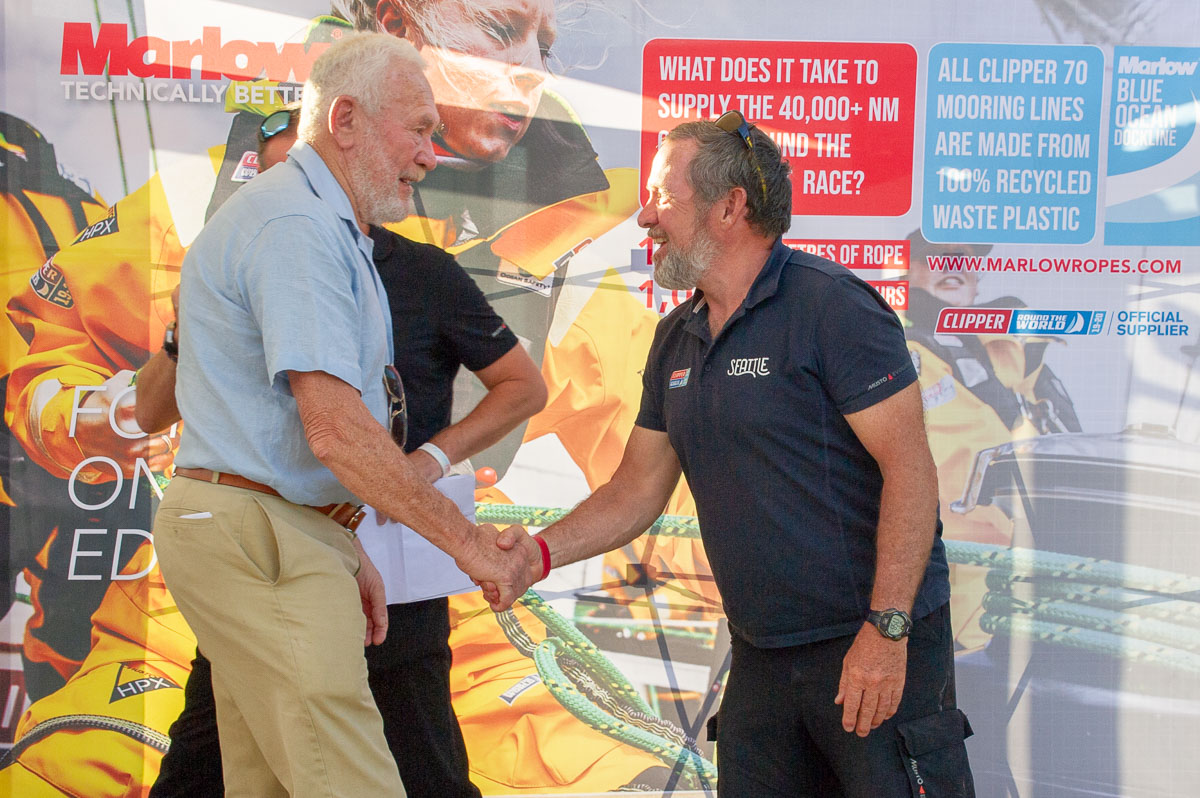 The Media Prize recognises the awe-inspiring content shared by the Race Crew in order to paint a picture of what life is like on board. The crews always deliver remarkable footage, images and blogs to show their experience, however on this race, the most deserving of the award was such a close call, two teams were recognised. Ian Wang on Ha Long Bay, Viet Nam was congratulated for the video ‘Give us a Wave’ filmed two weeks into the race. The video was chosen as it portrays the thrilling conditions experienced on board and the crew loving life in the Southern Ocean. View it here.

Equally loved was a video submitted by Zhuhai’s Chris Ball who quickly realised that a way to a First Mate’s heart is a hot drink. View the video here.

Recognising the efforts of the Scoring Gate section of the race, the results were announced to the crowd. The Scoring Gate was positioned approx. 135 nm due north of the rhumb line and great circle route across.

Qingdao was first to cross at 21:46:30 UTC on the 24 November, taking the maximum three bonus points. Followed by Ha Long Bay, Viet Nam which crossed at 23:53:12 UTC and crossing in third place and claiming the final bonus point was Imagine your Korea at 17:08:50 UTC on 25 November.

Mark announced another great Dell Latitude Rugged Ocean Sprint with very fast conditions. The teams had varying conditions over the 335 nm sprint section. Imagine your Korea were announced as the 3rd fastest time sprinting. WTC Logistics celebrated the news that they had grabbed 2nd fastest and GoToBermuda were thrilled to hear the news that they were fastest by approx. 43 mins in a time of 27 hours 47 minutes which gave an impressive average speed of just over 12.0 knots.This was the first time GoToBermuda have won an in-race challenge.

The moment the top placed teams had been working so hard towards then followed. The teams took to the stage to claim their winning pennants for their performance in Race 4: The Marlow Southern Ocean Sleigh Ride, named by the race’s Official Ropes Supplier.

After a super close race, Qingdao clinched a narrow victory. The team, flying the flag for China’s sailing city, piped closest rival, Ha Long Bay, Viet Nam, to the finish line outside of Fremantle Sailing Club, Australia, crossing the finish line just over an hour apart on 7 December. Very swiftly, the race for the final podium spot went to Imagine your Korea which enjoyed its first podium result of the 40,000 mile circumnavigation so far and made huge progress in the latter part of the race. 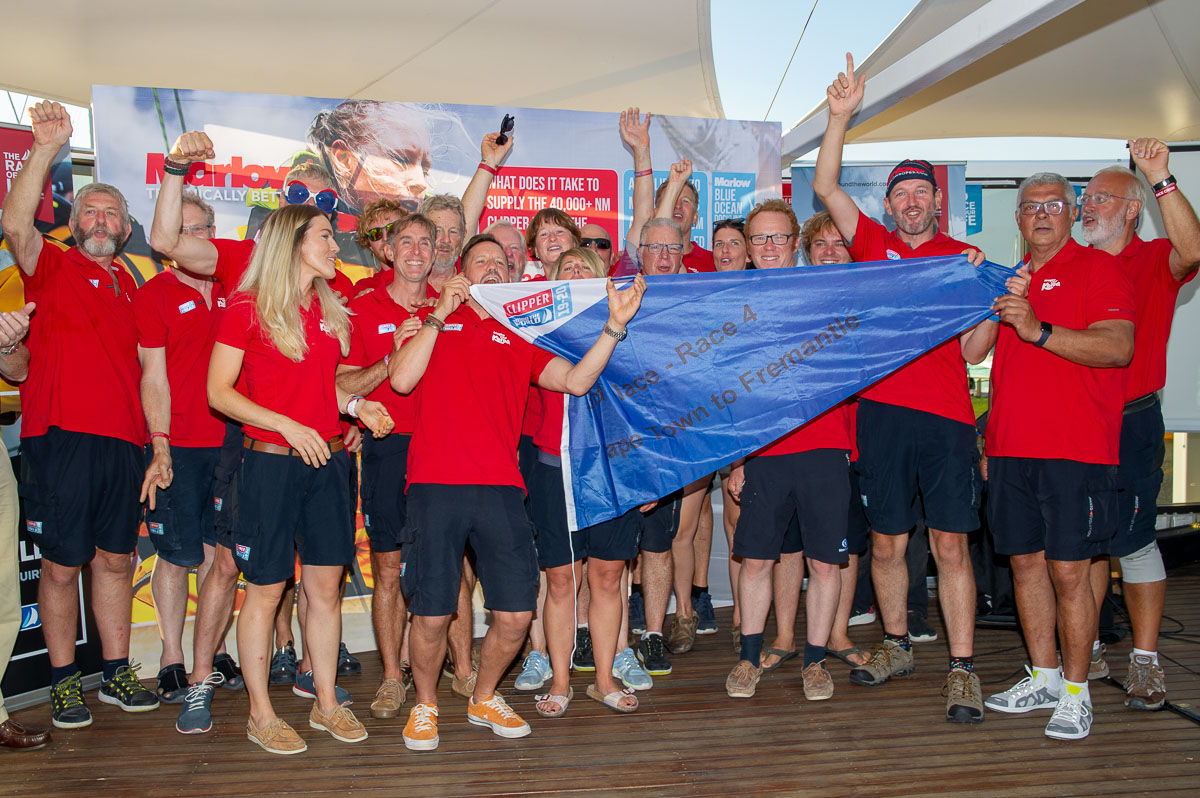 IMAGE: Imagine your Korea on stage

In second place, the Ha Long Bay, Viet Nam team, skippered by Josh Stickland, made its way to the stage to celebrate second place and its third podium position of the race. 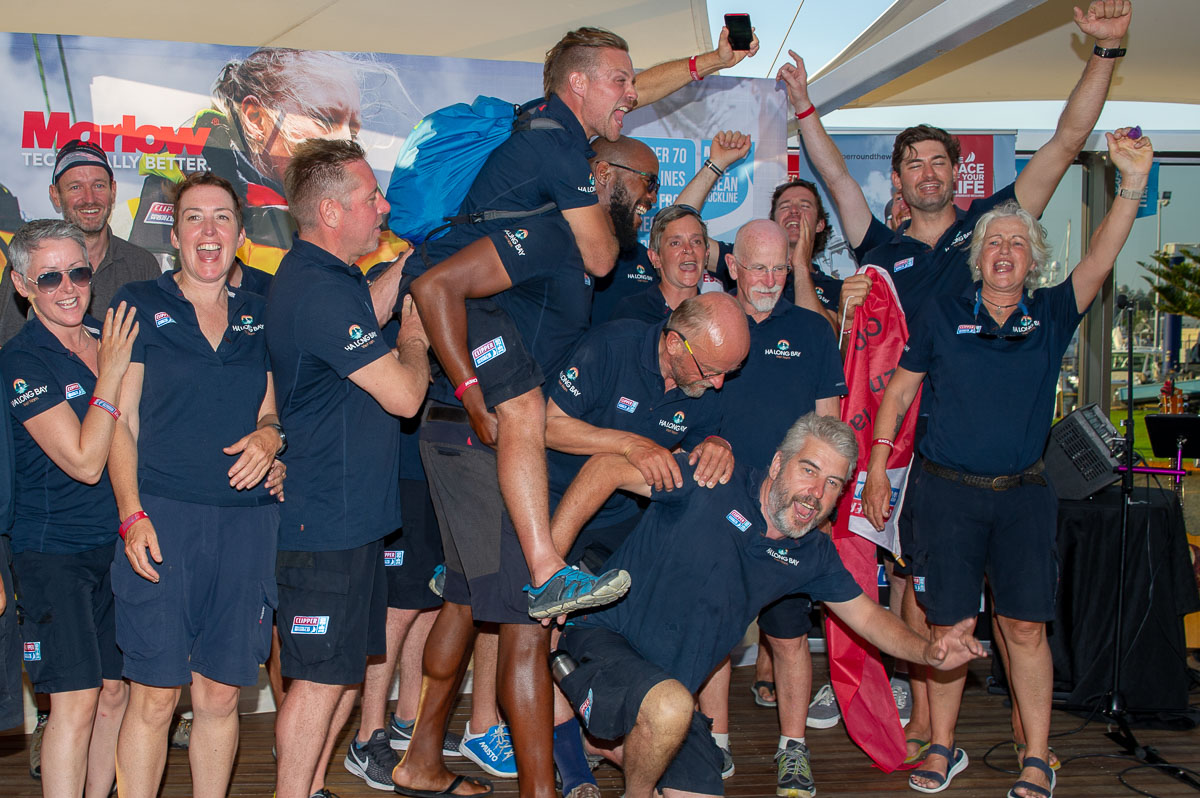 IMAGE: Imagine your Korea on stage

Making it a race hat trick, a victorious Qingdao team took to the stage to be presented with its third first place pennant in a row. 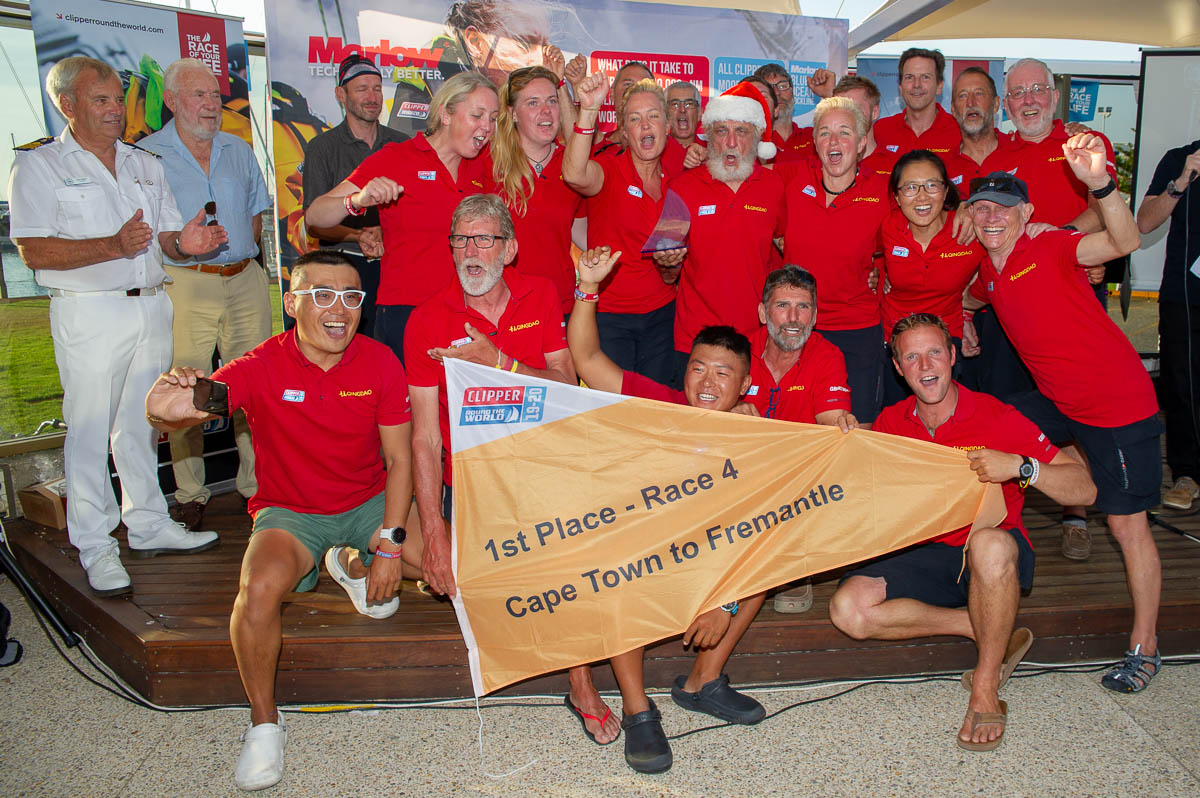 Leg 3 is a popular leg for crew wanting to experiencing Mother Nature at her best and follow in the footsteps of sailing legends. To celebrate their success, Clipper Race Director, Mark Light, invited all Race Crew who will be leaving the race after completing Leg 3, to the stage. 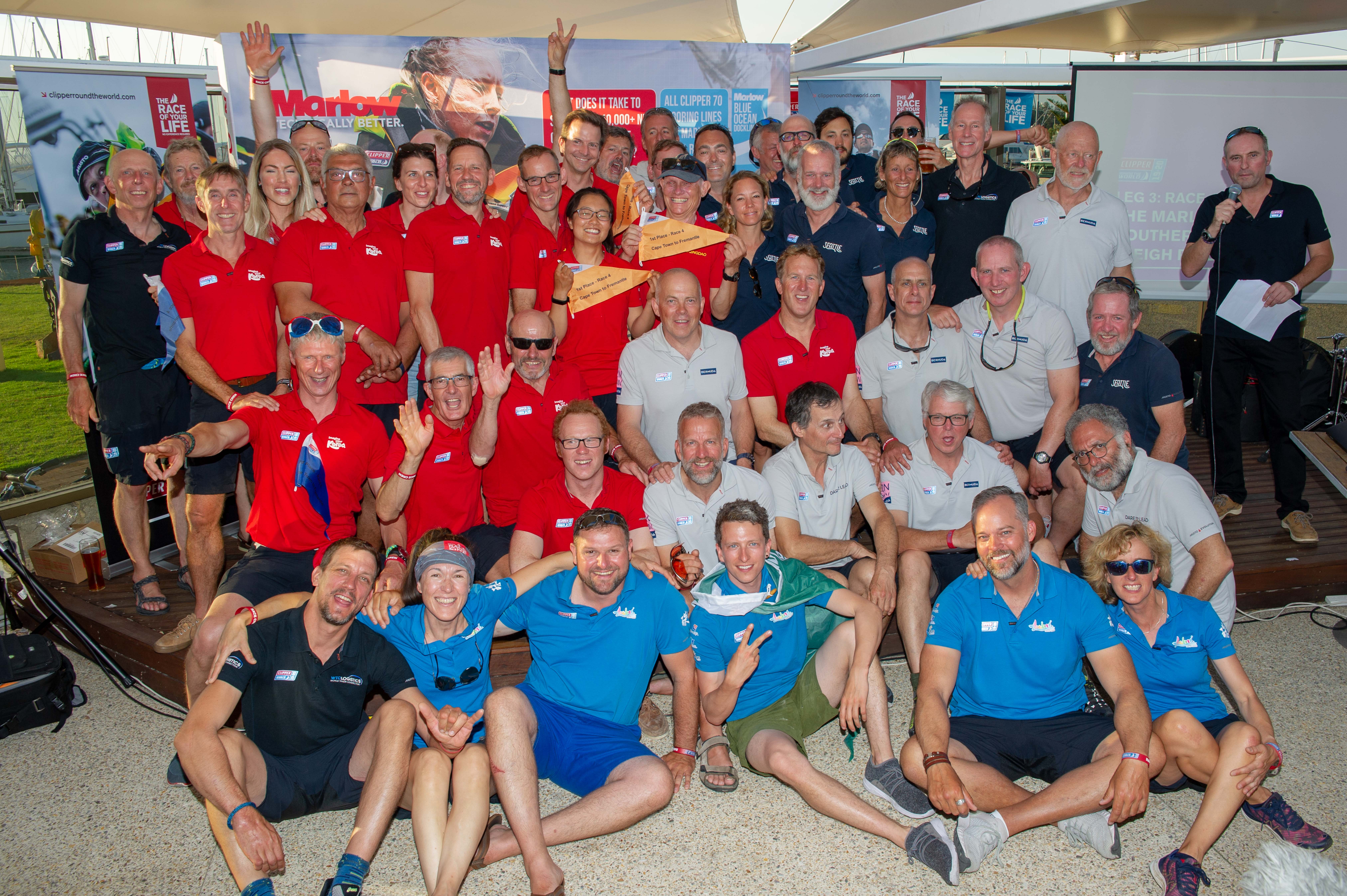 IMAGE: The crew ending their adventure in Fremantle

The final teams to complete the fleet in Fremantle will celebrate their individual successes upon their arrival and the results of their adventure will be celebrated on 21 December. After the highs and lows experienced by all, the occasion will pay tribute to the brilliant efforts by the non-professional crew, in the quest to cross the Southern Ocean.

The Fremantle Sailing Club is hosting the Clipper Race for the duration of the Fremantle stopover before eight of the teams depart for the Australian Coast-to-Coast Leg on 22 December. Between now and then, the crews will enjoy the blazing sunshine, meeting local school children, dinghy sailing at the yacht club, visiting local sights such as the Little creatures Brewery and Rottnest Island, which they had the pleasure of sailing around on the approach into the marina. Unicef, Punta del Este and Visit Sanya, China will be departing on the 24 December, exactly 48 hours after the other eight teams after the crew have rested and the boat is well prepped for the next race.

Head to the Fremantle Host Port page on the Clipper Race website for more information.

Punta del Este and Visit Sanya, China are currently match racing each other for the Roaring Forties Match Race trophy…

“The crew has been loving this intense sailing against time, looking at the weather forecast, our progression in the routing…