Following a super fast race across the North Atlantic with some stellar conditions, GoToBermuda has won Race 14: LegenDerry finale, crossing the Finish Line at 18:50:25 UTC.

The team, led by Skipper David ‘Wavy’ Immelman and First Mate Max Rivers, has not only taken another podium spot, but also its first win of the Clipper 2019-20 Race. This is a brilliant achievement for GoToBermuda, worthy of plenty of celebration when the crew arrive in Derry~Londonderry tomorrow morning, especially as they took the top spot in the final ocean crossing of the edition.

Skipper Wavy Immelman said: “I’m very very pleased for the crew. They’ve had a third, a second, and now with all of their hard work they’ve finally got a first. They really deserve it, they’ve put so much hard work and training into it and I’m so pleased for them. 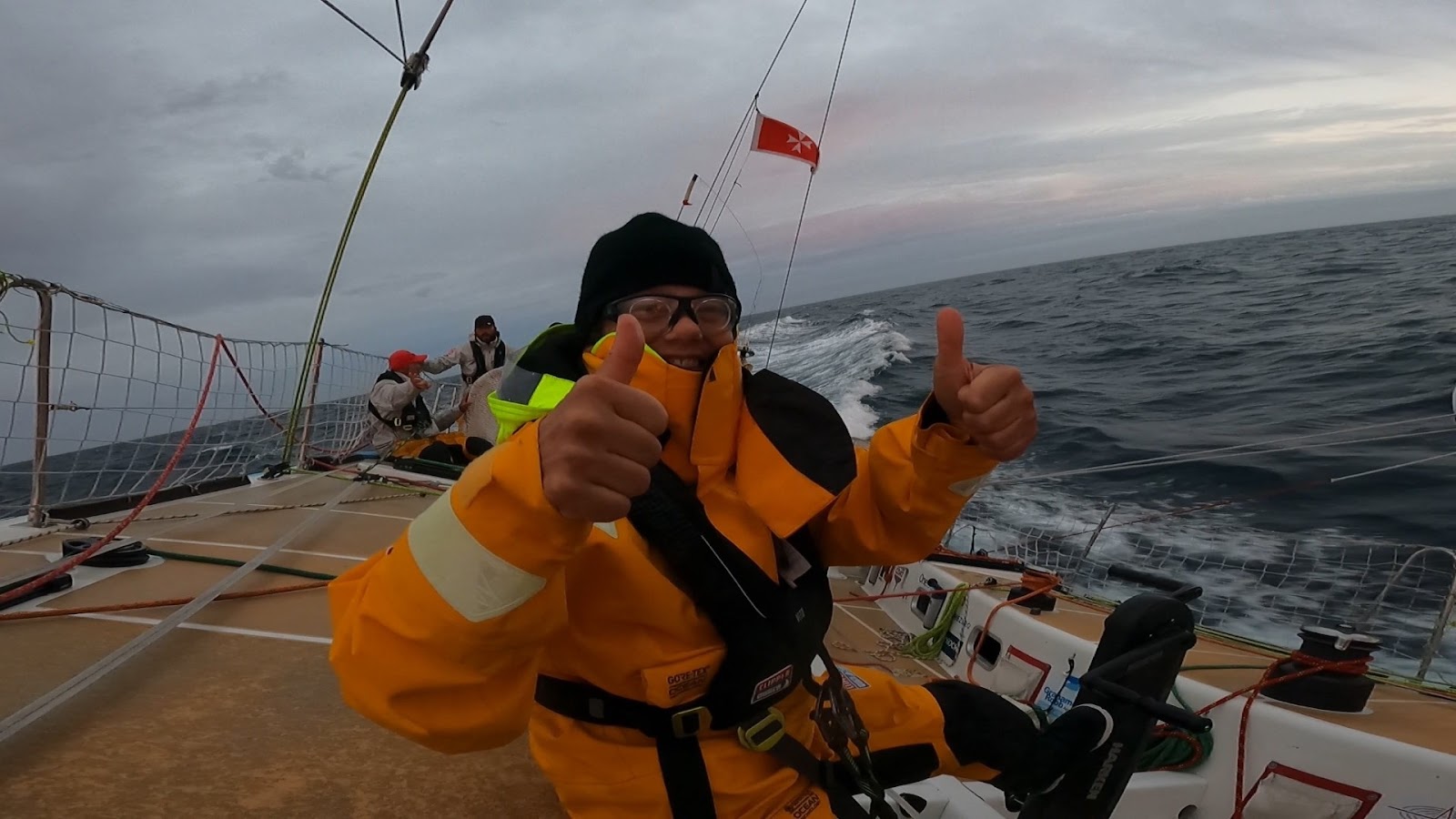 Praise for their resilience in holding onto first place was sent from the team's home port, Bermuda. “Congratulations to our GoToBermuda crew, led by Skipper Wavy Immelman, on their phenomenal win on the Derry~Londonderry race, marking Bermuda’s third top-five finish on this epic race and taking the top spot. We are immensely proud of the entire fleet of adventurers who braved the transatlantic journey from Bermuda to Derry~Londonderry via New York. They have proven how ordinary men and women can achieve the extraordinary.” Tracy Berkeley, Interim Chief Executive Officer, Bermuda Tourism Authority.

Finishing just twenty minutes later and claiming yet another podium position was WTC Logistics, sailing through the Finish Line at 19:10 UTC. For Skipper Dan Jones, AQP Ineke van der Weijden and the Race Crew on board ‘Black Betty’ (the team’s nickname for its yacht) this is their third consecutive podium and third win overall. And impressively, since becoming Skipper of the team from Race Restart in March 2022, Dan and his team have been on the podium in four out of five races. 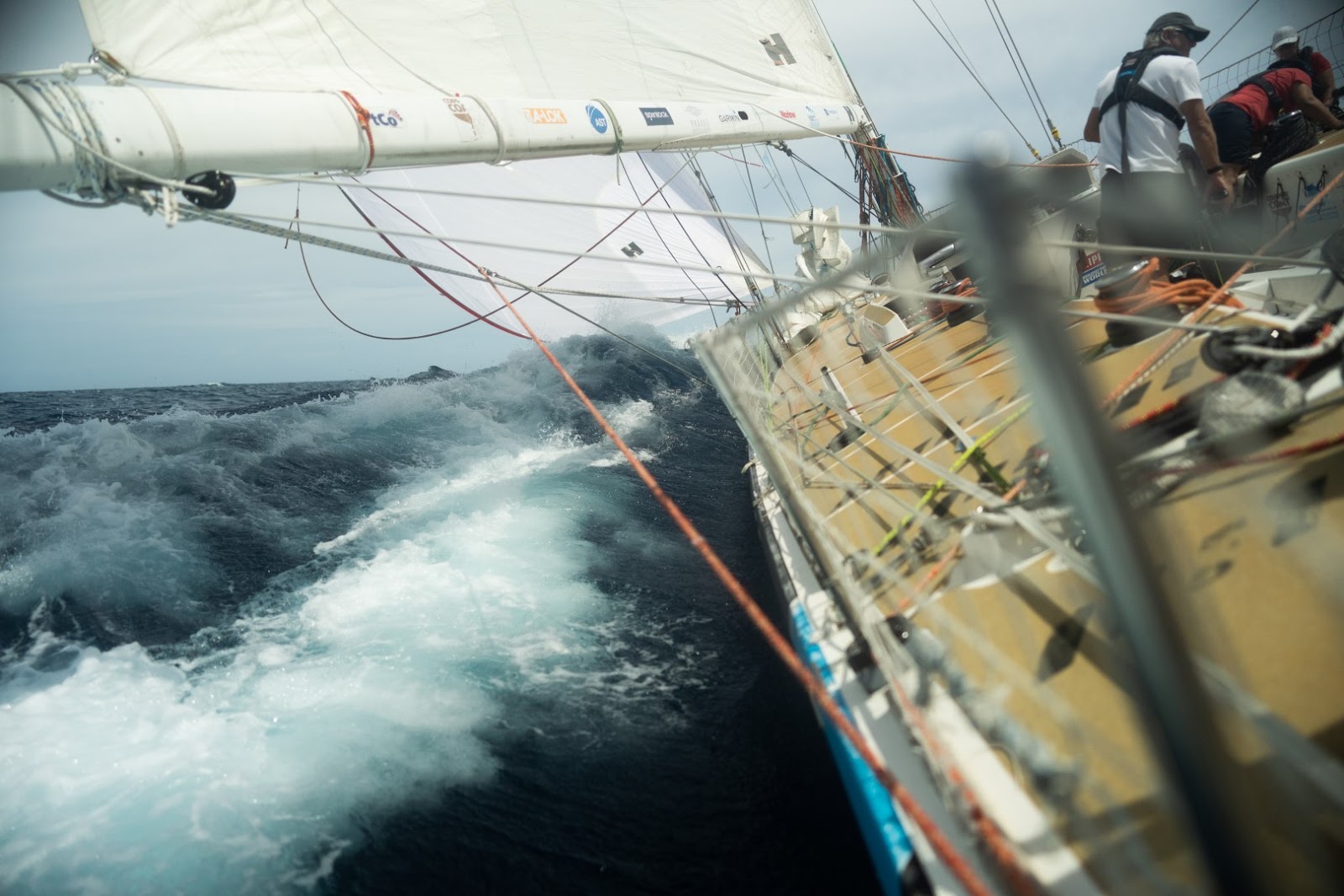 Image: WTC Logistics tearing through the North Atlantic on Race 14

“It was a really fast race where I think we averaged 11 knots the whole way across the Atlantic, giving the crew a really good chance to sail the boat fast. Our top speed was 26.5 knots, helmed by Paul Widdowson, whilst surfing down a really big wave in about 50 knots of wind! We had a course extension which made it a really tactical end to the race, meaning we had a deep downwind run followed by a hard upwind bash for the finish.

“I’m super proud of all the crew, they really dug deep, especially over the past 48 hours. We’re really happy to be sailing into Derry~Londonderry and to have completed our last ocean crossing!”

Congratulations was sent to the team from Team Partner WTC Logistics. Anthony Clarke, its Logistic Director said: "“Dan, Ineke, and the amazing crew of WTC Logistics, welcome to Derry~Londonderry and congratulations on securing second place, yet another podium! We have all been following your progress and willing you on. I speak for all of our supporters, families and all at WTC Logistics in saying that you all continue to push the limits and our expectations on what you can achieve, reading the blogs on how well the newbies are settling in is a testament to all of the circumnavigators, Ineke and Dan, you guys should be so proud of your leadership and work ethics."

The final podium place of Race 14: LegenDerry Finale went to Unicef. The team crossed the line at 22:09:26 UTC. This result means Unicef has earned a top three spot in five races.

Image: Sunrise ahead of Unicef

Says Unicef Skipper, Ian Wiggin: "After an amazing North Atlantic race, the past 48 hours have certainly been the most testing. We recorded 57knots north of Rockall and large breaking seas. This combined with tide and restricted visibility really tested Unicef and her crew. The conditions were both exhilarating and humbling. We made sensible sail plan choices and the crew really rose to the challenge. We raced safely through these conditions. To remain competitive at the same time is a real bonus.

"Our long term strategy seems to have paid off this race. Our aim was to be competitive until the end with all of our equipment. This race was a drag race that required sustained hard work and concentration. There were few overtaking lanes for us until the course extension. Getting the shifts and rotation of the low pressure system right was partly down to chance and mostly down to endless hours spent in the nav station trying to predict realistic speeds and angles. Remaining in phase with the rotation was key to sailing less miles and more direct miles. The crew are ecstatic with the result. What a race. What an adventure."

Punta del Este's Skipper Jeronimo Santos Gonzalez exclaims: "That was one of the fastest crossing of the Atlantic ocean! One weather system took us all the way to from New York to Derry~Londonderry. Achieving high speeds most of the way with challenging conditions on big waves downwind sailing. Crossing the finish line was very emotional for the Punta del Este crew as we have put a great effort to climb up to fourth position after a slow start of this New York to Londonderry race.

With unwavering support from the team partner, The Punta del Este Yacht Club sent a message of congratulations, saying: "What a fast race this has been for the Punta del Este crew. We are amazed at how you made it into the lead pack after a poor start - not enough for a podium position this time but almost there, enough to be proud of your incredible performance – no doubt fuelled by Dulce de Leche or Mate, something unique to Punta del Este! Vamos Punta - go enjoy a well-deserved rest!" 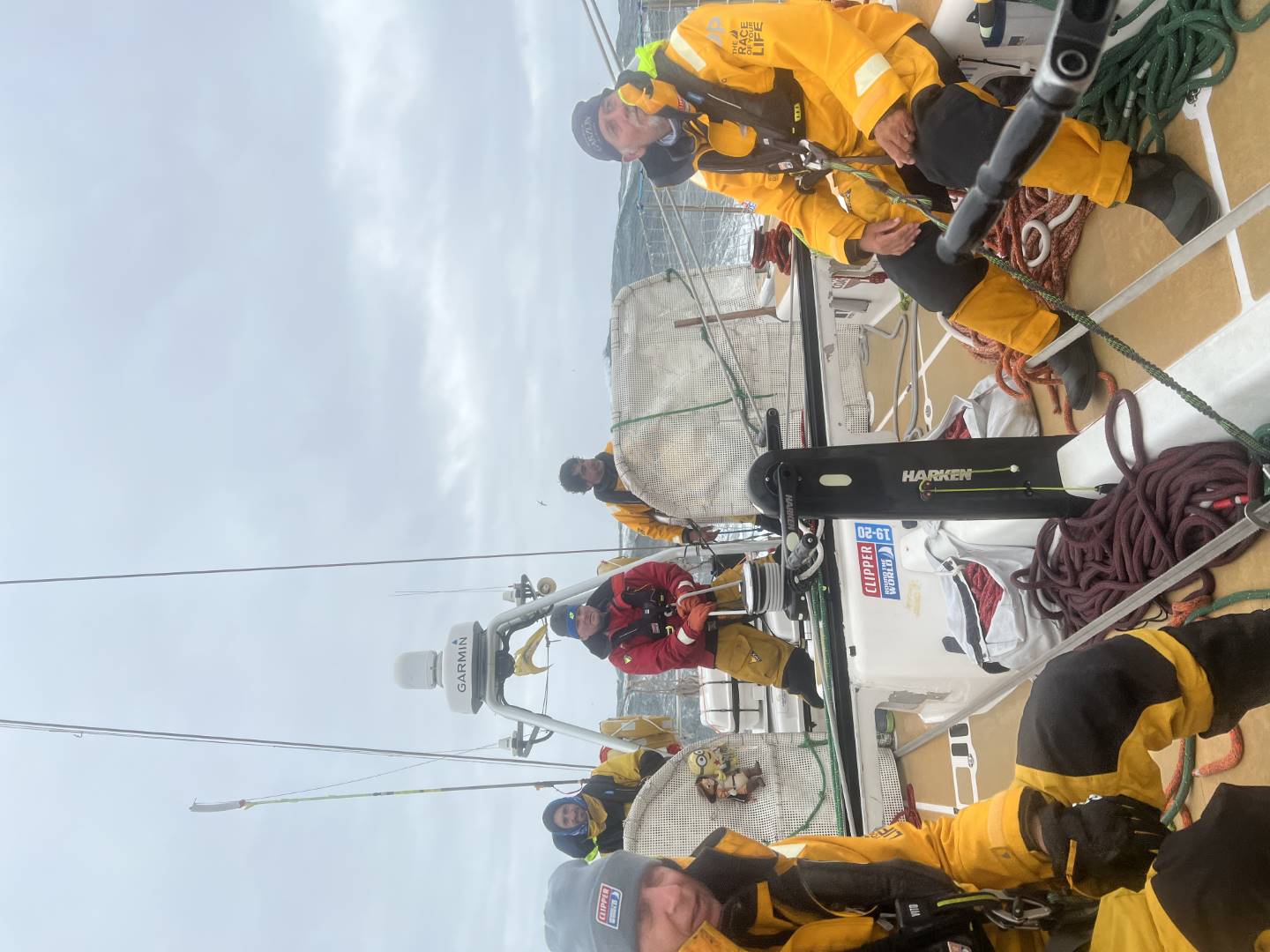 Image: 'It's a bit wavy' on board Punta del Este

Seattle has finished the race at 05:58:09 UTC on 13/07/22, in fifth place - one of their highest race positions on the global circuit. It has been a fantastic race for Seattle who were in the lead pack for majority of this fast and close race.

Says David Hartshorn, Skipper of Seattle: "It's awesome to be back on home turf. I'm not sure if we sailed or flew home - what a fantastic race! I'm incredibly proud of the team, its been a privilege to sail with them. It's disappointing not to cash in the podium position we held for the majority of the race, as these guys so deserved it. But the race, as always, has been very tight, so I'm happy to take the 14 points our Joker earns us."

On the teams persistence in clawing back race positions, Qingdao Skipper, Chris Brooks said: "What a race! After travelling 100 miles out of the way on the promise of the 2-3 knot gulf stream to our south, Qingdao failed to find positive current but fell upon a wind hole for 12 hours In 10th place, the world got worse for us as the fleet we'd broken away from found good winds and currents. In an attempt to turn the tide we headed to the only place we knew there was good current, back to the fleet 100 miles north.

"Once there, we were over 100 miles behind the fleet and endeavoured to reel them in. A further ridge of high pressure saw us have to head away once more from the desired course leaving us over 200 miles from the bulk of the fleet.

"My team has made me so proud. They never gave up and we inspired belief. We could do this. The next placed boat was 100 miles ahead and many more were 200. I'm amazed we have managed to over take many and come back to sixth place over taking overall rivals Ha Long Bay, Viet Nam. Whilst we haven't achieved the podium on this race it is surely the biggest comeback of my sailing career and one I will cherish and remember always.

To all our competitors, thank you. It's been an impressive race especially at the end through the storm where we saw 60 kts of wind and made our final places. The front runners, you have set the bar keeping out of reach. Well sailed, I look forward to the next one.

Mike, on completing race from New York to Derry~Londonderry said: "What an amazing race. We held our own, everyone worked tirelessly, and we are really proud of our seventh place. Now we are looking forward to some LegenDerry hospitality and some well earned rest.

Ha Long Bay, Viet Nam, second in the overall standings, had a tough race in the latter part half of Race 14. The team spent the early stages after departing New York, jostling amongst the lead pack but dropped back. The team crossed the Finish Line at 11:07:10 UTC on 13/07/22. 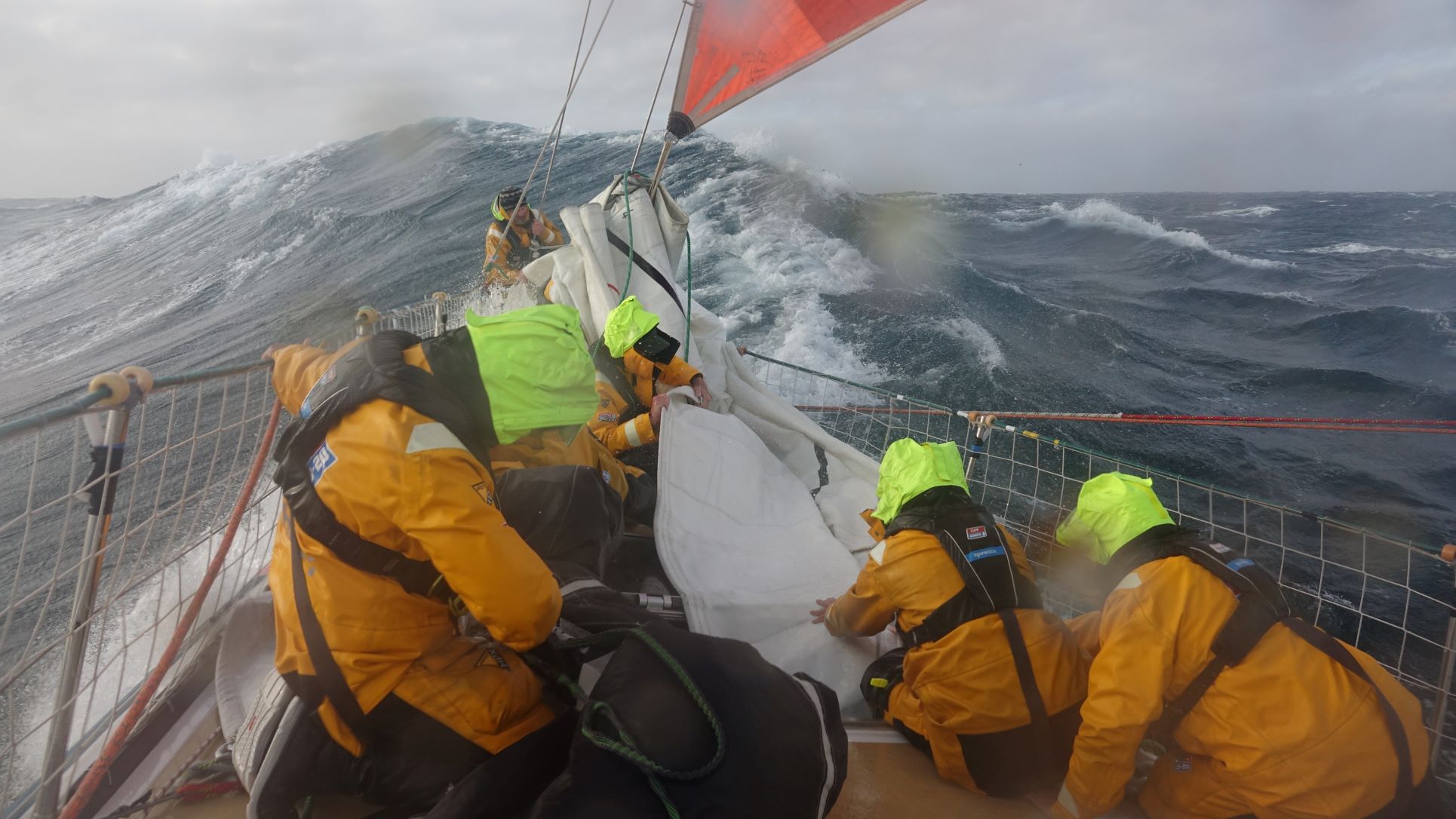 Just before arriving into Derry~Londonderry, Skipper Josh Stickland said: "Well we are almost there! It's been an epic adventure, but not always for the right reason. It's now time to try and get some rest. and who knows, I might get a whole day off to see a little Ireland and Northern Ireland. One more race to go!"

Said Zhuhai Skipper, Patrick Patrick van der Zijden: "We just crossed the Finish Line and will now be heading to Derry~Londonderry and its Foyle River.

"After a smooth Atlantic Crossing there was a sting in the tail of a course extension with gale force winds. We are ecstatic to have arrived today, just before the deadline to come into the marina. The crew is looking forward to spending time in Derry~Londonderry and its surrounding areas."

Dare To Lead crossed the Finish Line in the early hours of Thursday morning, finishing Race 14 at 01:59 UTC.

Please see below the latest Derry~Londonderry ETAs.Please note that these are the best estimates based on the latest weather and…