Ha Long Bay, Viet Nam has topped the podium for the second time in the 2019-20 edition. Winning Race 9: The WTC Logistics Tri-Race, the first race of the Mighty Pacific Leg, after crossing the Mandatory Finish Gate at 20.07.22 UTC on Saturday 14 March. This is Ha Long Bay, Viet Nam’s sixth podium result out of eight races - a phenomenal achievement.

The team has maintained second place in the overall standings and having chosen to take part in the Ocean Sprint 2 and 3 of this race could add further bonus points to the 11 for first place.

Skipper Josh Stickland said: “It was a team effort for sure, and the ones to congratulate are the crew.

“The team are feeling good and rightly so they really got stuck in from the get go, and a big thanks for their patience with me - it was nerve wracking stuff from the end of Ocean Sprint Gate 6 onwards. The weather conditions could not have been better for the crew to start their adventure. It was the classic triangle course that had all the elements of sailing up wind beam reach down wind and of course a wind hole.

“We are very happy with the second win, but we are only focusing on the next race now it's the North Pacific and that's all anyone is thinking about.”

Race 9 was short but sweet and was full of strategy and excitement. Without doubt, it was one of the closest races so far with the majority of the fleet staying within 25nm of each other for the duration of the offshore course. The conditions were generally good with favourable winds which resulted in some energetic and high intensity racing on all points of sail. 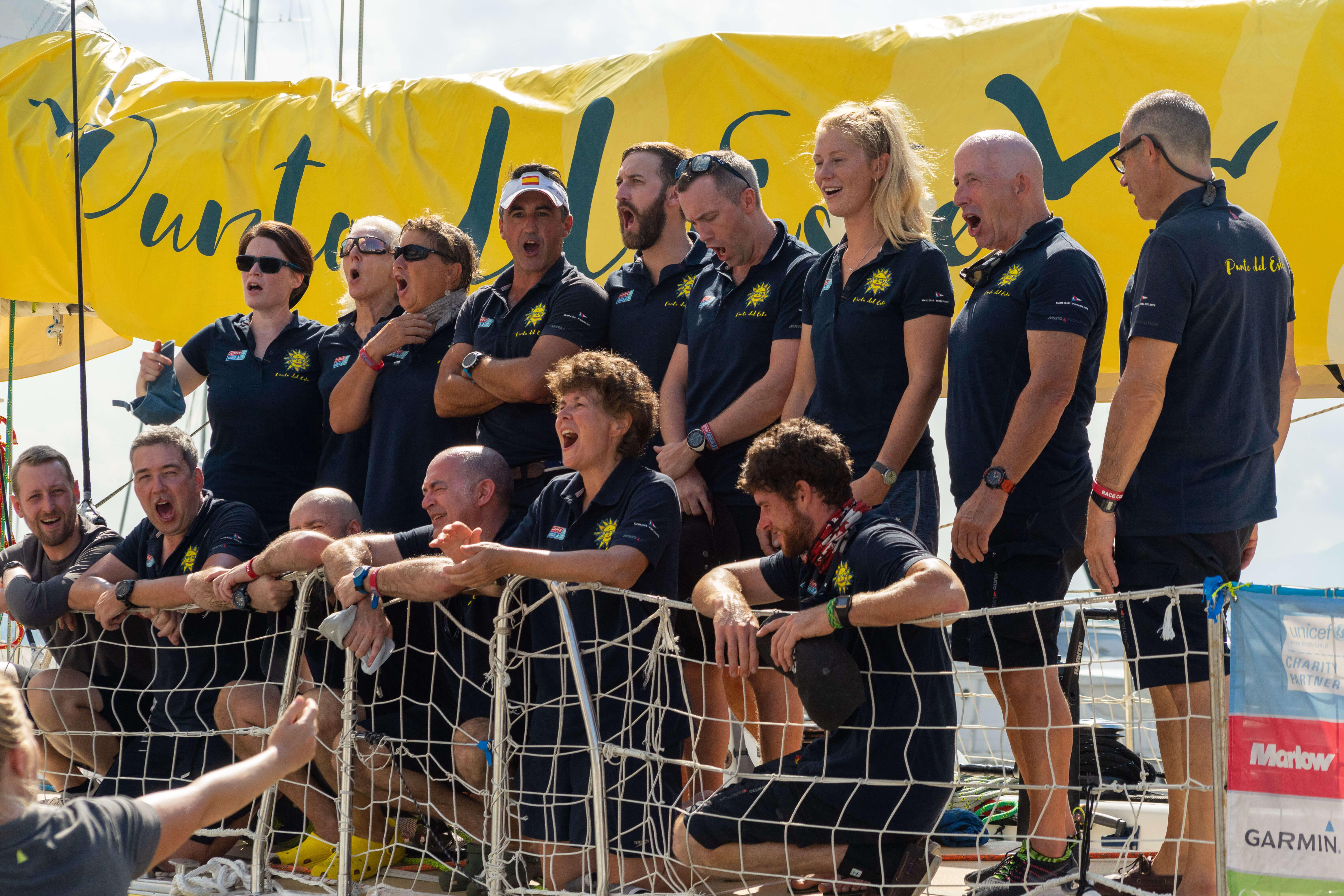 Light winds at the northern part of the course saw the fleet compress and saw Ha Long Bay, Viet Nam and second-placed Punta del Este, which finished at 20:29:11 UTC, take advantage of the increased wind speed after rounding the mark and entering the third sprint section.Skipper of Punta del Este Jeronimo Santos Gonzalez said:“Race 9 was as a race as it should be with speed, good breeze, wind holes, sailing fights at close quarters and lots of change in positions.

During the third sprint Punta del Este again fought hard with Visit Sanya, China and Unicef knowing that the inevitable frustration that comes with wind holes would impact us at some point. Whilst slowly gaining on Visit Sanya, China the crew were constantly trimming the sails day and night; using our trimming torches to light the edges of the main sail and headsails to ensure maximum drive and efficiency. Marginal gains are everything when racing a matched fleet and mistakes must be kept to a minimum. We did it in the end, holding our breath until the last minute.”

Just 18 minutes separated second and third place but taking the nine race points and a third-placed podium was Visit Sanya, China which finished at 20:47.32 UTC. 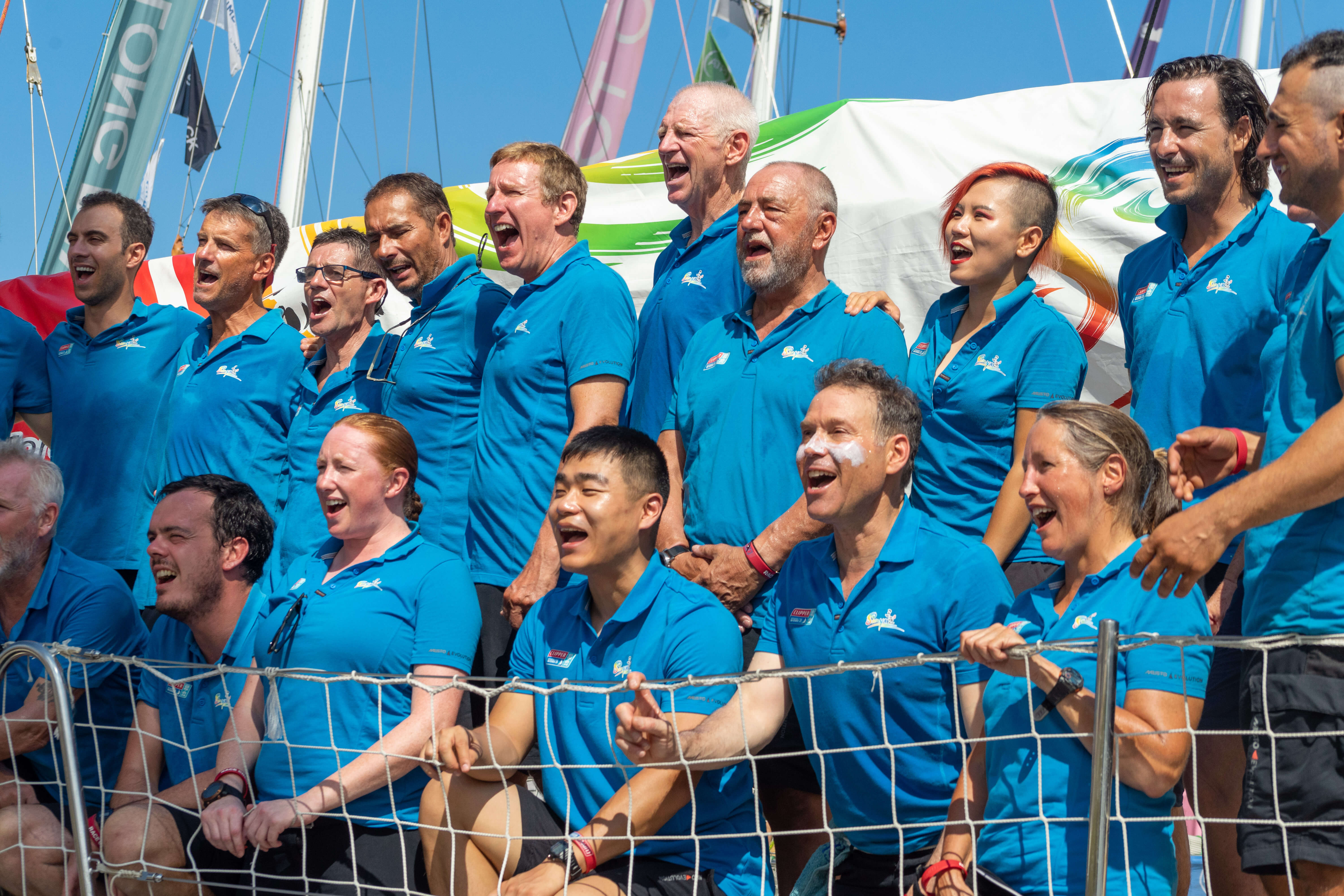 Seumas Kellock, Skipper of Visit Sanya, China commented: “It’s been an intense race, similar in length to that of a Fastnet which has kept all the yachts close together all fighting for position.

“The crew raced well and raced hard and got a finishing position they deserved! Running down towards the finish we were neck and neck with Punta del Este, Unicef and Qingdao, all of us knew that the potentially light winds in the last 10 miles could cause a reshuffle so we had to stay focussed and take every opportunity as it arose. We managed to stay ahead of the other two but Punta del Este just pipped us to the post, but a great race was had by all.”

At approximately 750 nautical miles long - the shortest race of the circumnavigation after the route was amended, the fleet sailed the triangular course out of Subic Bay in the Philippines into the South China sea. Each team could opt to take part in two out of the three Dell Latitude Rugged Ocean Sprints and Skippers had to declare their intentions within six hours of Race Start. For the top three fastest teams in each sprint there is the added bonus of being awarded extra points - of which could make all the difference in both this races’ results as well as the overall leaderboard.

For both the fleet, the supporters and for fans of the Clipper Race, this has provided some real ‘edge of the seat’ moments as the leaderboard has constantly changed. It has been fascinating to watch the fleet implement different strategies and tactics which has resulted in a truly compelling race overall.

From Mark Light, Clipper Race Director:The Clipper Race Office constantly monitors the fleet’s progress and current and forecast weather conditions. As a result of forecasted light wind in Subic Bay the Race Office has amended the Race 9 Course Instructions to include a Mandatory Finish…

Race 9: The WTC Logistics Tri-Race has been a short but fast challenge for the Clipper Race teams and the…

On Day 3 of Race 9: The WTC Logistics Tri-Race, the fleet are nearing the third section of the short…