For Roseann McGlinchey, her love affair with the Clipper Race began six years ago in Derry-Londonderry, when she saw the fleet arrive at the city’s inaugural Foyle Maritime Festival.

After visiting the festival every year while studying in the Northern Irish city, this year Roseann wanted to view the celebrations from a different view, on board a Clipper 70.

“After completing university last summer I felt like it was time to take on a new challenge and try to develop a new skill. Having seen the boats when they first came to Derry-Londonderry I fell in love with them and I have always wanted to sign up,” says Roseann.

“Last year I went along to the Foyle Maritime Festival and the fleet departure with some friends to follow the boats to the start line in Greencastle. We had a great time passing all the crews and seeing them set up for the race start. I went home that evening and filled out my application form.”

Roseann, who had no previous sailing experience before signing up for the race, originally signed up for Leg 8: The Homecoming, which includes the Derry-Londonderry stopover. Following her Level 1 training, Roseann knew it wouldn’t be enough and is now preparing to take on the full circumnavigation. 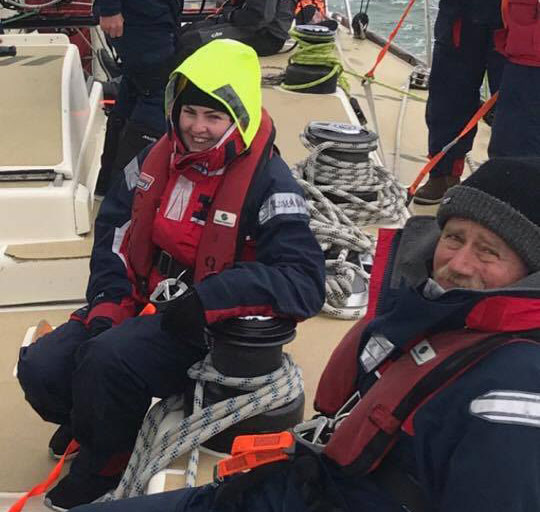 Having now completed three of the four levels of compulsory training, Roseann says: “My favourite day so far was flying the spinnaker on Level 3 where we had lovely weather and the perfect winds. We had to work as a team and use everything we had learnt and it just made everyone smile seeing that we could do it.

“I like to be a little competitive, I think it will help me to get out of bed on a freezing cold rainy night to go and change sails. It is also nice to have a team working towards something and achieving goals.”

Supported by her family, who live near the city, Roseann says she is looking forward to seeing her loved ones when her team docks in Derry-Londonderry for the beginning of the Foyle Maritime Festival in 2018.

Last month, the 2016 edition of the Foyle Maritime Festival clinched top spot at the North West Business Awards, having been praised for developing the visitor and tourism economy of the North West. The festival attracted thousands of people like Roseann to the banks of the River Foyle during the Clipper 2015-16 Race. The Foyle Maritime Festival has previously won the Best Event/Festival Experience title at the prestigious 2015 Northern Ireland Tourism NITA Awards for its 2014 festival at the end of the Clipper 2013-14 Race.

In no doubt that the 2018 Foyle Maritime Festival in Derry-Londonderry is set to be the biggest ever yet, Roseann says: “I may be biased but I think it will be the best stopover on the race and it’s the one I am most looking forward to. Derry-Londonderry has continued to improve over the last six years with continental markets, fireworks, and an extremely warm welcome for Clipper Race crew and their supporters.

"The city as a whole has a great connection with the race, something the residents are very proud of. I feel this year will be no different!”

If you would like to join Roseann on the adventure of a lifetime, there is limited availability on the Clipper 2017-18 Race and we are now recruiting for the 2019-20 edition. To apply, click here.

The Clipper 2017-18 Race fleet will visit the city of Derry-Londonderry for the Foyle Maritime Festival in July 2018. For more information visit the Host Port page here.

NAME: Emily WoodasonAGE: 31 OCCUPATION: Landscape ArchitectNATIONALITY: BritishLEGS: One to Four: The Atlantic Trade Winds Leg, The South Atlantic Challenge Leg, The Southern Ocean Leg and the All Australian Leg. TEAM: Visit SeattleIt’s not uncommon to hear of new challenges being set as a new…