Here’s what you need to know about Jeronimo Santos Gonzalez.

Jeronimo, 44, who hails from Galicia, began sailing dinghies aged seven when his family moved to Melilla, a Spanish enclave in North Africa. With his Father and Grandfather having both been sea captains, the sea has always been in his life.

Jeronimo has represented both his hometown, Melilla, and his country in sail racing. He counts competing against a strong fleet of 150 boats in the Spanish Nationals and classifying for the European Championships as his greatest achievements in sailing so far. 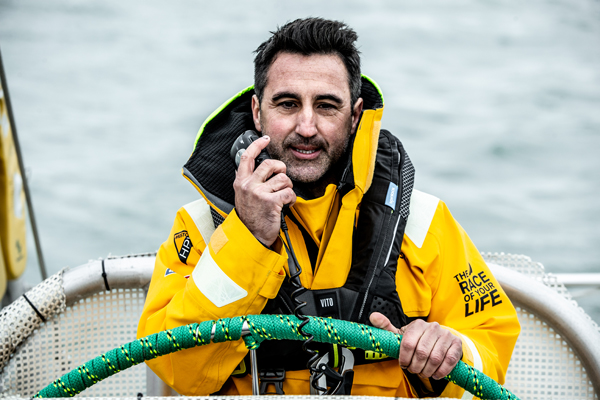 His ocean experience includes five Atlantic crossings and thirty Biscay deliveries. He also spent three seasons as a Skipper of a 60ft catamaran with weekly guest charters which took him all around the Red Sea and the Mediterranean. Most recently, he has been acting as a race skipper with non-sailors in corporate events in the Solent.

As a Clipper Race Skipper, Jeronimo is living out a lifetime ambition of sailing around the world professionally. He sees the race as a huge adventure and can’t wait to meet new people and be an integral part of the Clipper Race community.

On who has inspired him to be where he is today, Jeronimo credits his wife, who he says believes people can do anything they put their mind to, and in sailing it’s Jose Luiz Perez Garcia, who is also known as ‘Morito’. A Spanish sailing champion, he was Jeronimo’s sailing mentor when he was a teenager.

His most memorable moment at sea so far was sailing next to Stromboli volcano when it was erupting. He is most looking forward to racing the Southern Ocean, and says he will aim for a calm and empowering leadership style on the boat.

He counts himself as both a night owl and an early riser, his drink of choice is a Cuba Libre, and his favourite movies are ‘The Empire of The Sun’ and ‘Out of Africa’. The last book he read was ‘The Churchill Factor’ by Boris Johnson, and the best piece of advice he will share with his crew will be to live this adventure to the fullest.

In addition to his sailing qualifications, Jeronimo has a Law Degree and a PADI Diving Instructor certificate. As well as growing up in Melilla, and currently residing in the UK, he has also lived in the Japan, Ibiza, and the Philippines.

The Clipper Round the World Yacht Race has announced that Grahame Robb Associates (GRA) has been appointed to deliver a bespoke leadership development programme, specially designed to hone the leadership and team development skills of its professional Skippers and Mates ahead of the twelfth race…

Qingdao’s 16 year Clipper Race heritage has inspired the branding for the 2019-20 edition of the global ocean challenge.…

The Clipper Race has renewed its partnership with TIMEZERO by MaxSea, returning for a third consecutive edition as the Official Navigation Software Supplier.The eleven strong fleet of 70 ft ocean racing yachts will be equipped with TZ Professional for the 40,000 nm circumnavigation. TZ Professional…

British Clipper 2017-18 Race Circumnavigators, Mike Miller (50, from Windsor) and Glenn Manchett (53, from Cambridge), who raced on board…