The first Prizegiving of the Clipper 2019-20 Race took place at the stunning Host Port of Marina de Portimão. Crew gathered to celebrate their achievements against an incredible backdrop of the Atlantic Ocean and a golden sunset. 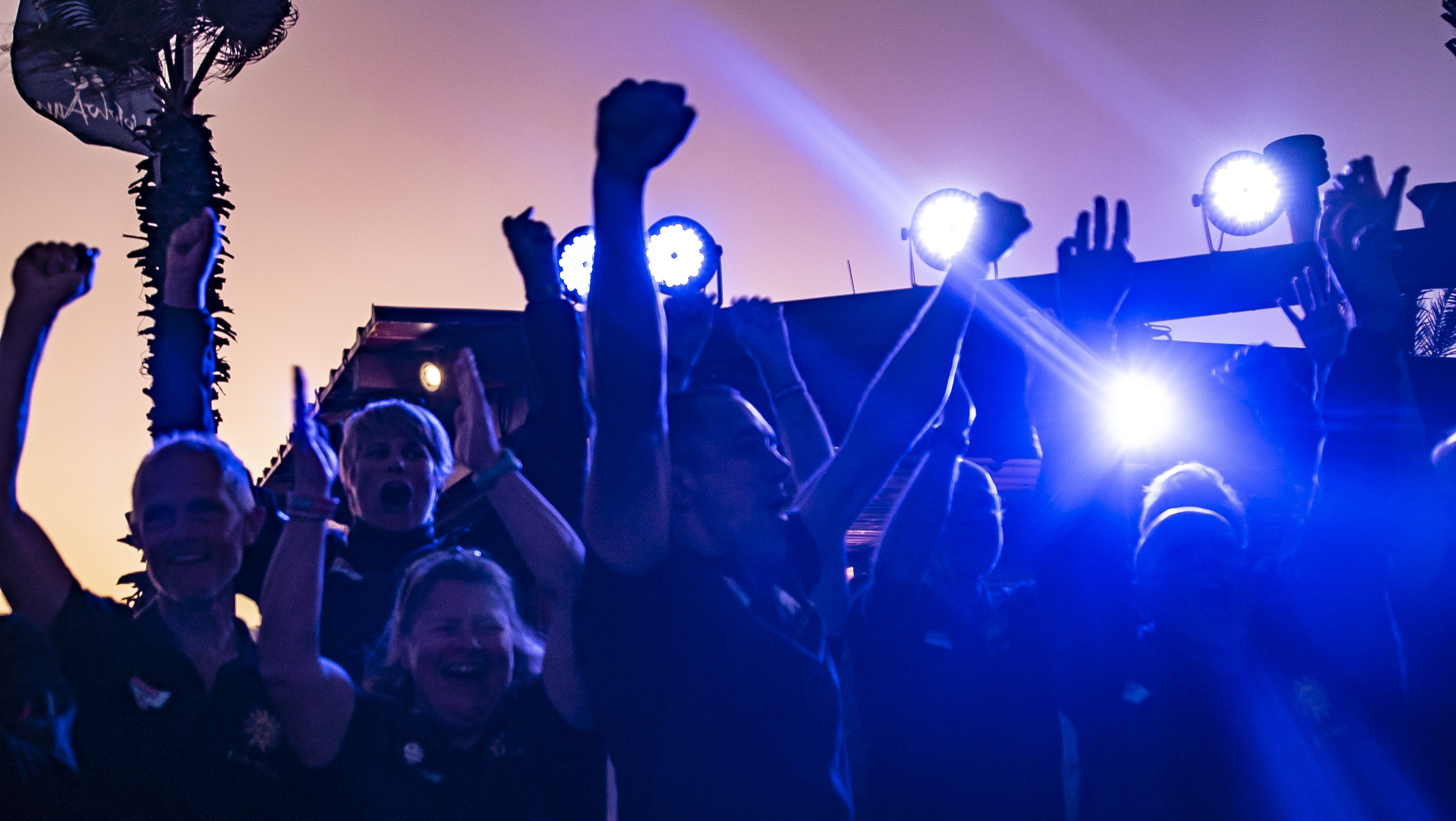 Clipper Race Director Mark Light opened proceedings, congratulating the teams for how they handled what was a tough opening race. Mark was joined on stage by Rodrigo Moreira Rato, Media Manager for the Marina de Portimão, to MC the night, with the pair presenting on an impressive floating stage.

Rodrigo said: “It is an honour for Portimão to host the Clipper Race and its incredible crew who, after this first race, can officially call themselves true sailors. Thank you to our Partners, the Marina de Portimao and the City Hall, and our sponsors for making this possible.”

Among the dignitaries at Prizegiving was Eurico Correia, Owner of Marina de Portimão, who took to the stage to officially greet the Clipper Round the World Yacht Race to the Marina de Portimão, saying: “Welcome Clipper Race, to this city which was once visited by Romans.” He went on to present Clipper Race Founder Sir Robin Knox-Johnston and CEO William Ward with a glittering yacht made from Portuguese crystal. 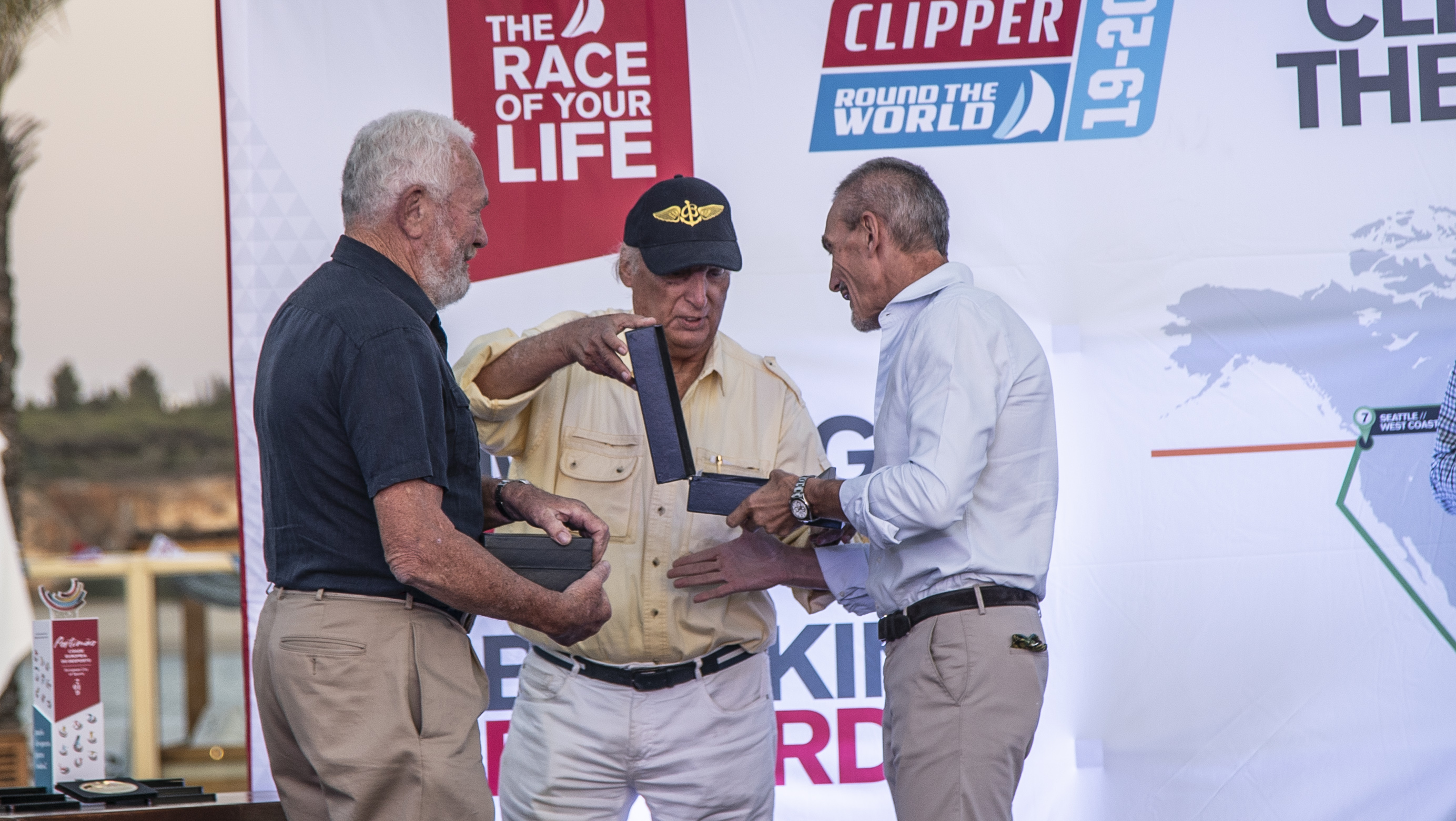 ir Robin said: “Thank you to Portimão for such a fabulous welcome. Everyone has felt the warmth we have received from this city.”

And speaking of the Race 1 Crew he added, “We gave you this short race to realise what you have taken on. From now on you will be racing hard and enjoying yourself in our Host Ports.”

The Skippers were honoured with medals by the Mayor of Portimão, Isilda Gomes, who said to crew, “We are very happy to have you here. This year, Portimão is the European City of Sport and we are so are proud to host this event for the first time. I hope that in the future, you will visit us, not only for sailing but also for your holidays as you are our friends. Please visit our gold medal winning beach - Praia da Rocha, enjoy our city and the Algarve.” 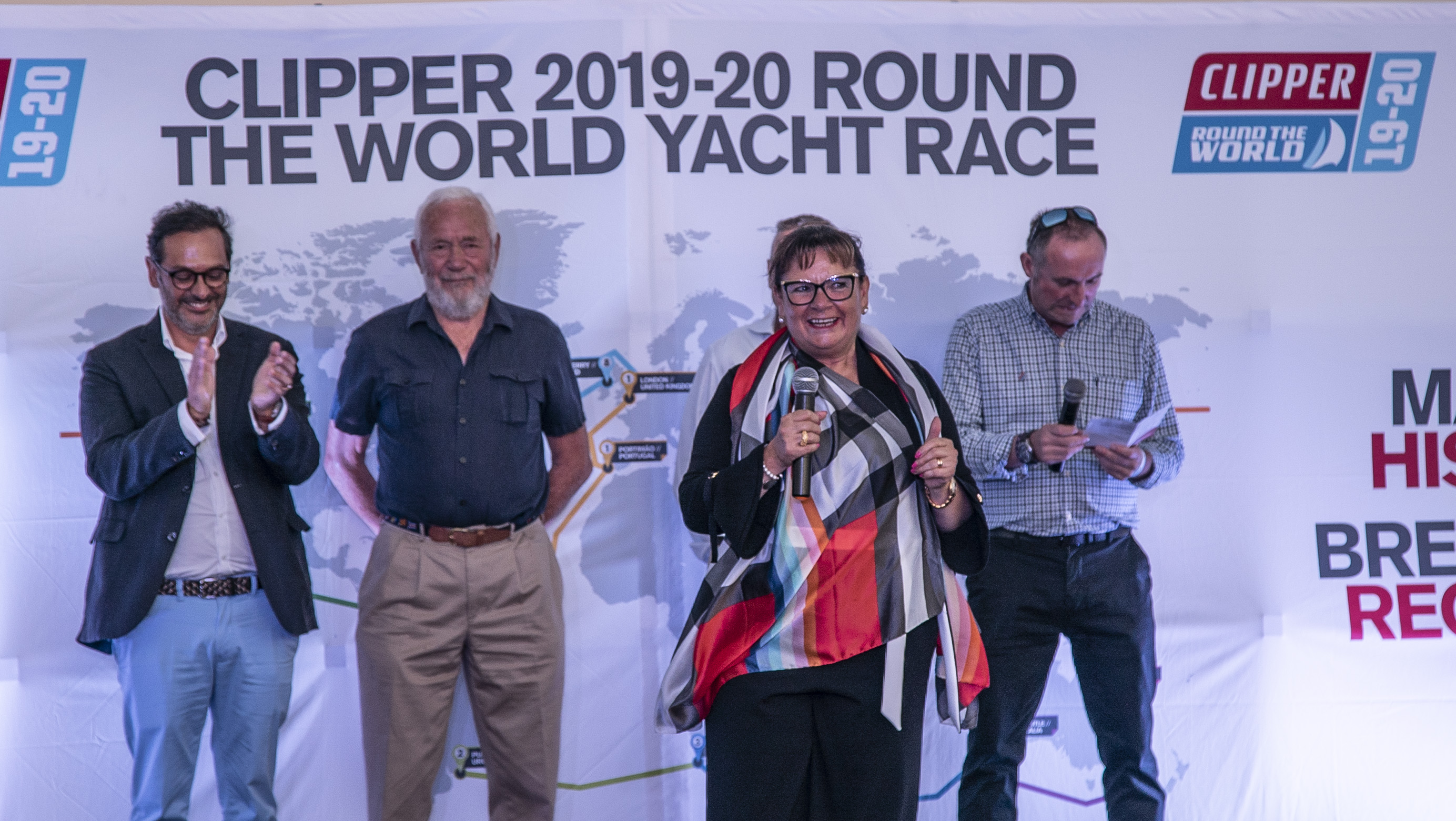 João Fernandes, President of Algarve Tourism Board, took the opportunity to congratulate the teams on their achievements and encourage them to experience all that the Algave has to offer during the stopover. He said, “Welcome to the Algarve, the starting place of globalisation. Portimão means great harbour and after this event, we look forward to more nautical events visiting our city. Congratulations and I look forward to having a life experience like the one you are having. We hope you enjoy your stay, good luck and fair winds.

A special mention also went to Joao Bento, for helping with this partnership and he said he dedicated these kind wishes to the people of the Algarve.

And there was a huge round of applause when Mark Light announced that staff and crew have already raised over £112,944 for Charity Partner Unicef UK. The amount is an incredible achievement as it is a quarter of the way towards the race goal of raising £400,000.

The first award of the night was for the newly named Dell Latitude Rugged Ocean Sprint, which was awarded to Punta del Este, while Qingdao was handed the flag for being first across the Scoring Gate.

Qingdao was soon back on stage to receive the third place race pennant. Qingdao crew member Phil Siddle said: “It’s amazing, our crew is just amazing. It’s all down to the Skipper and to the crew, we worked really hard. We were a bit devastated when we lost the lead and were drifting around for 12 or 14 hours but in the end we worked hard to get here and we got on the podium which is just amazing.” 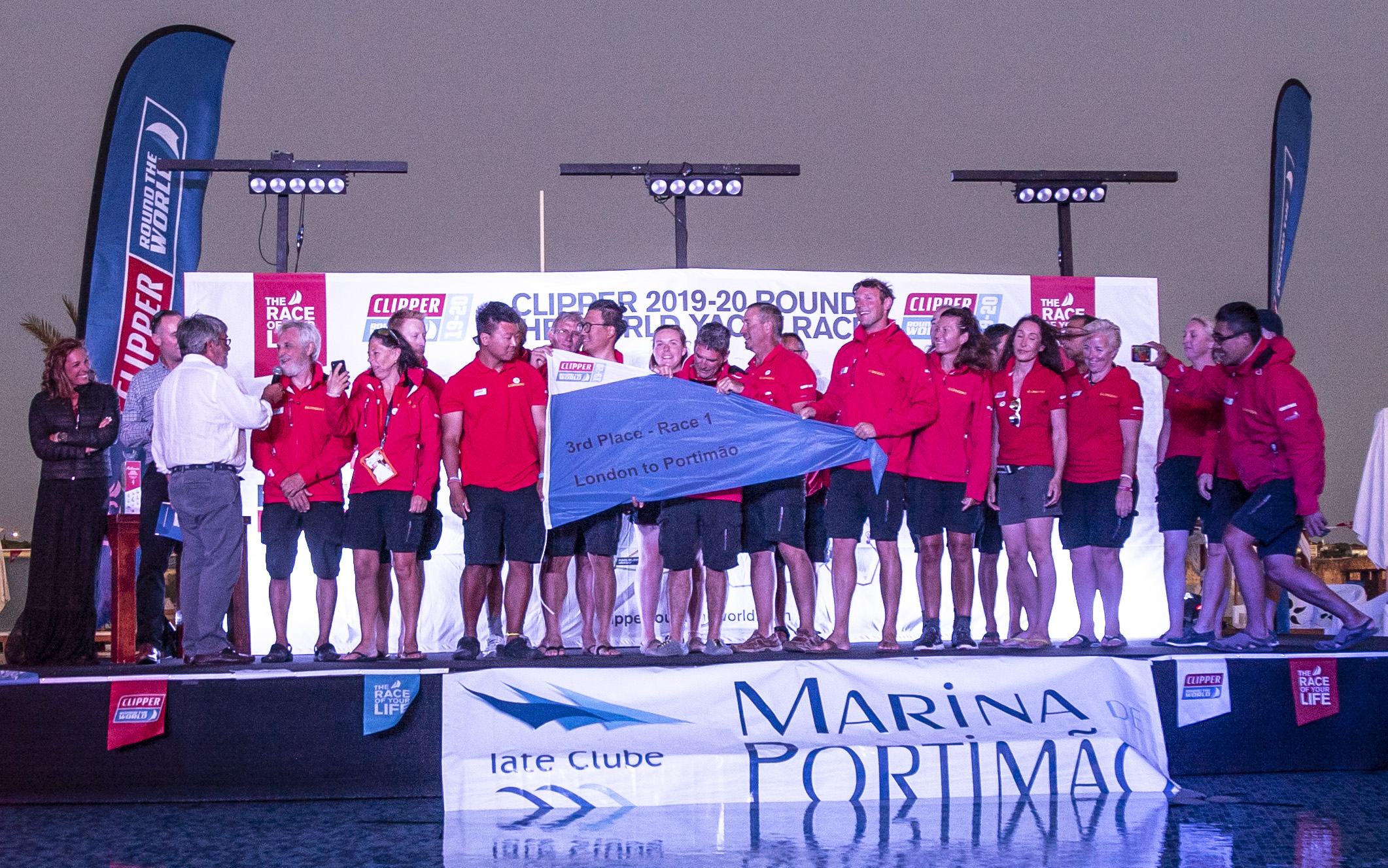 Next to take to the stage was second placed Dare To Lead, led by Skipper Guy Waites and Mate Hugues Stellio. After receiving his pennant, Dare To Lead crew member Louise Roy commented: “I don’t think we thought we would start the race with a podium and it’s just exhilarating to have achieved this already. It’s just so exciting.” 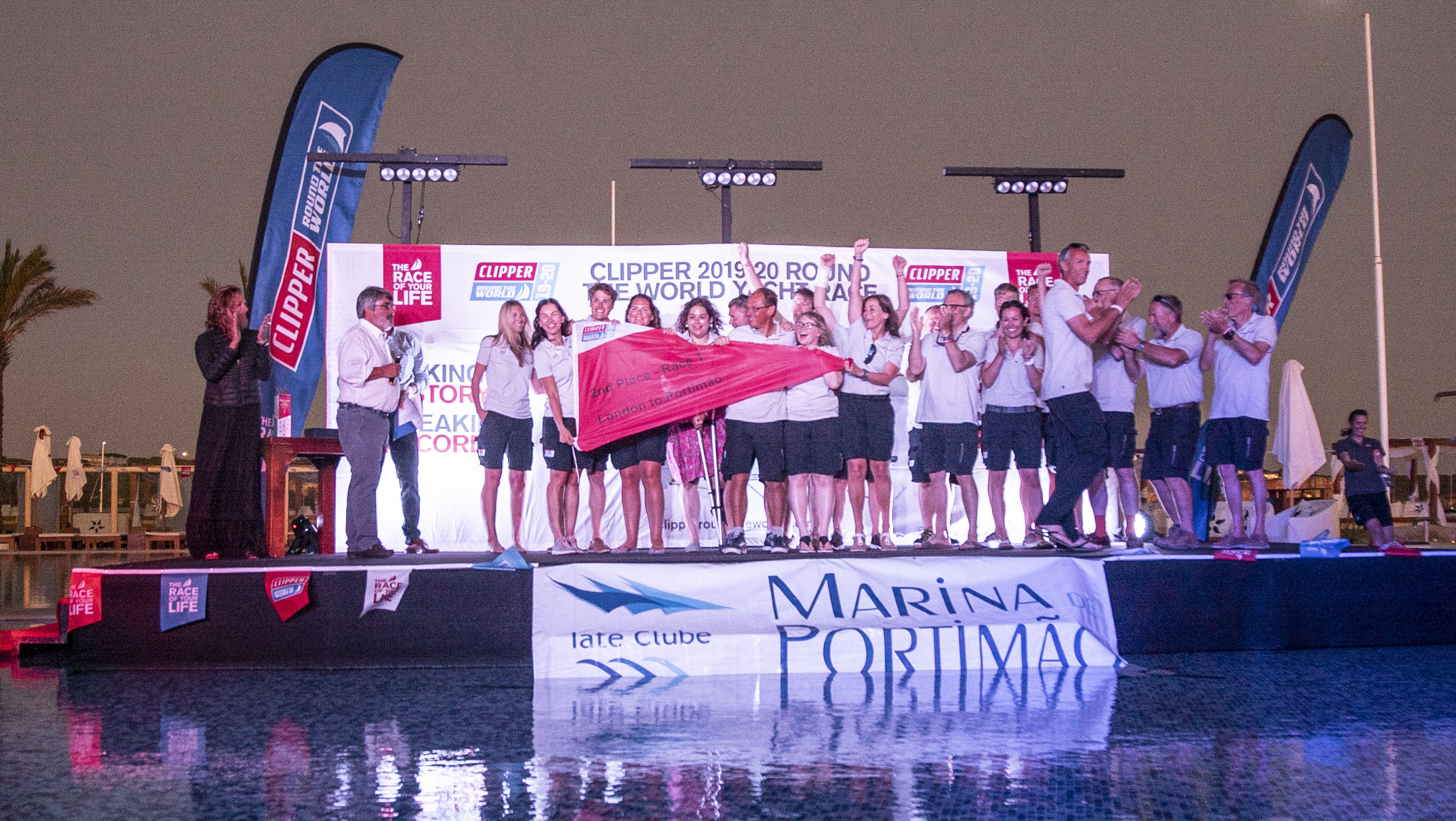 There were plenty of cheers and singing when the winners of Race 1, Punta del Este, arrived for its big moment. After leaving the stage, crew member Kati Kaskeala said: “Hearing our team song and having everyone cheer for us isãamazing. We’ve had so many nice remarks from other crew members saying that we deserved to win and that we are a great team. It’s a really nice feeling.

“How could it be better than this? It’s a dream come true for both teams and it sets it up for a great race overall.”

Punta del Este will be racing to its home port on a huge high after claiming a win in the opening race to Portimão in Portugal.Despite being as low as sixth in the standings earlier in the day, the Spanish Skipper of Punta del Este…