It has been yet another testing 24 hours for the Clipper Race fleet with a mixed bag of conditions leading to further shake ups on the leader board.

For the cluster that chose to take the westerly course, making the bold decision to add extra miles to their route, the gamble is beginning to pay off, as they enjoy favourable wind conditions and begin to advance on the leaders. 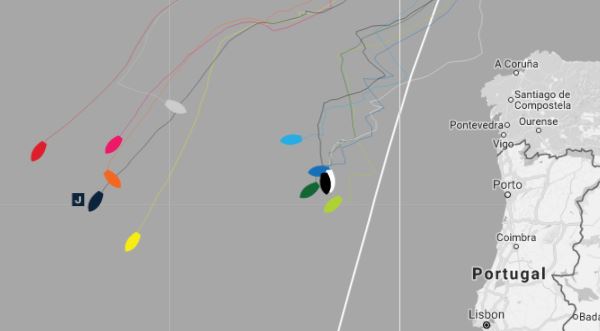 Andy said: “Things are hotting up on the GREAT Britain boat as we try harder and harder to chase the pack at the front of the fleet. Hopefully our tactics of staying further offshore will start paying off soon.”

However, for those who chose the more direct route to the east, initial success has now been stalled as they suffer through another painful day of low winds in the centre of a wind hole, all the time watching their leads disappear. Wendy Tuck, Skipper of Sanya Serenity Coast, which is currently clinging on to first place, comments: “It’s always a bit tough to see your lead chipped away, or should I say smashed to smithereens!

“We are now just waiting for the morning heartbreak, otherwise known as the position report. I did have it all planned out how to go around the weather system, but we just lost speed a tad too early and never got a chance to use my cunning plan.”

This was a thought echoed by Skipper Dale Smyth on fourth placed Dare To Lead.

“Well a tough day yesterday as we watched all our hard work slip away as we sat in a windless hole.”

Maintaining a positive outlook, despite slipping further down the rankings, is Bob Beggs, Skipper of Unicef. Unicef is now in fifth place behind Visit Seattle (second), Garmin (third), and Dare To Lead, but Bob said: “The focus on board is good, and with just over 5,000 nautical miles to push, the race is just getting warmed up.”

The weather ahead looks promising, with some stable conditions on offer for those to the west and some wind on the way for those stuck in the wind hole yesterday.

After Greenings Skipper, David Harsthorn, suffered a serious injury to his left hand which requires emergency medical attention, the Greenings team has stopped racing and is diverting to Porto, Portugal.

All crew on board are safe and well and their emergency contacts are being informed of the situation. The full statement can be found on the Clipper Race Website. [LINK: https://clipperroundtheworld.com/news/article/greenings-diverts-to-porto-following-david-hartshorn-injury ]

Unicef remains in the lead for the fourth consecutive day of this opening race but the next 24 to 48 hours could be telling, with distinctly different strategies now in play within the Clipper Race fleet.The leading three teams are still close together…

Light winds continue to challenge during the fourth day of racing, which have caused the fleet to condense by 20…

As the fleet makes steady progress south past the UK and towards Northern France, Skippers and crew are focusing on the next challenge; the Bay of Biscay, notorious for violent storms and heavy seas. Skipper of second placed Sanya Serenity Coast, Wendy Tuck, reports: “This…

Strong tides running North have divided the fleet tactically overnight, with the front of the pack heading close inshore to…