Following an impressive climb up the leaderboard, Qingdao, is still holding pole position, with GREAT Britain in second place and Sanya Serenity Coast third, as champagne sailing conditions with around 20 knots of following wind provide perfect spinnaker sailing for teams as the journey south continues.

With the earlier tactics of heading west paying off, GREAT Britain, currently chasing down Qingdao on the westerly edge of the fleet, is striving to improve its position further still.

Skipper Andy Burns reports: “It’s been a beautiful day for sailing with good winds and fine weather. This morning was spent sharing helming on the spinnaker and honing the crews skills at sailing down wind.”

Adding, Andy says: “The race long ‘Bulldog’ strategy has already created unique opportunities and we hope our stage one objective will bare fruits that you will all recognise shortly.” 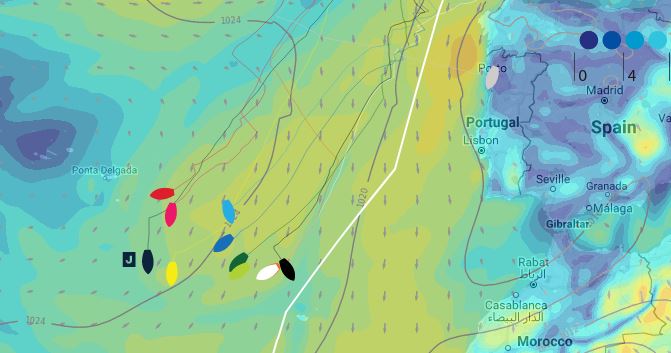 With the excellent downwind conditions looking set to stay for a while, many of the Skippers have been using the opportunity to coach and develop their crew and have been commending their efforts, with some Skippers even feeling able to catch up on some of the sleep they may have lost in these early stages of the race.

Garmin Skipper Gaëtan Thomas, in seventh, says: “Water is still flying under the hull, we are still under spinnaker and making some progress south west. It is interesting to see the fleet coming back together with the positioning report changing quiet a lot as most of us are on a same line.”

Taking the opportunity to develop his crew in the great conditions, he adds: “Another helming coaching day, learning the art of spinnaker sailing and keeping a surf. One by one each hour, so now we have about eight good drivers for day sailing, and four for night sailing.”

Eighth placed Skipper Bob Beggs reported: “The Unicef team were enjoying great sailing today, perfect downwind sailing with many new helms being trained up. Life onboard is good, I even managed to get a good night sleep, heaven!”

Navigationally Bob noted: “We crossed the latitude of the straits of Gibraltar two hours ago. This was abundantly obvious by the density of crossing traffic heading into the Mediterranean or to North America. With Europe now behind us Morocco and Africa is on our left flank, it’s going to get hot and sticky from here on!”

Also impressed with his crew’s progress, Liverpool 2018 Skipper Lance Shepherd, in ninth, reports: “So last night we decided to sail with an asymmetric overnight after sailing fairly conservatively during the night previously, and it comes as no surprise that the team have nailed it! Flying consistently with no issues whatsoever, holding a good course and buzzing along.”

Whilst the conditions have been excellent, not all went to plan however as a few teams, including Qingdao and Visit Seattle, and Nasdaq all cited ‘kitemares.’

With Nasdaq’s spinnaker troubles continuing from yesterday, Skipper Rob Graham is clearly frustrated after suffering another spinnaker wrap, saying: “The teamwork attitude is strong on Nasdaq, even though it is horribly frustrating to be under white sails in perfect spinnaker conditions, especially knowing that the other boats could be pulling away from us.”

Rob and the Skippers will be glad to hear that the general good flow of the trade winds is set to continue as the fleet heads further south. With no squall activity seen yet, and the forecast is looking positive until south of the canaries, it is still all to play for as the teams continue to work hard for their positions.

Well-wishes continue to pour in for Greenings skipper David Hartshorn, who underwent successful surgery on his injured hand yesterday and will be returning to the UK to continue treatment and recovery with the aim to re-join his team in the later stages of the race.

Until then, we are pleased to report that Greenings is now successfully alongside in Porto and the team are now reunited with David himself, as well as Race Manager Sarah Hoare and Deputy Race Director Dan Smith, who will Skipper Greenings onward to Punta del Este. Check here for further updates on the Clipper Race website as we have them.