The sixth day of Race 10: The Garmin American Challenge has featured champagne sailing conditions, as the fleet marks another milestone - crossing from Californian to Mexican latitudes.

After a run of steady breeze, the only change to the leaderboard is at the top, with Qingdao reclaiming its lead from Visit Seattle. However, the hold is marginal, with less than a nautical mile (nm) between the two teams. 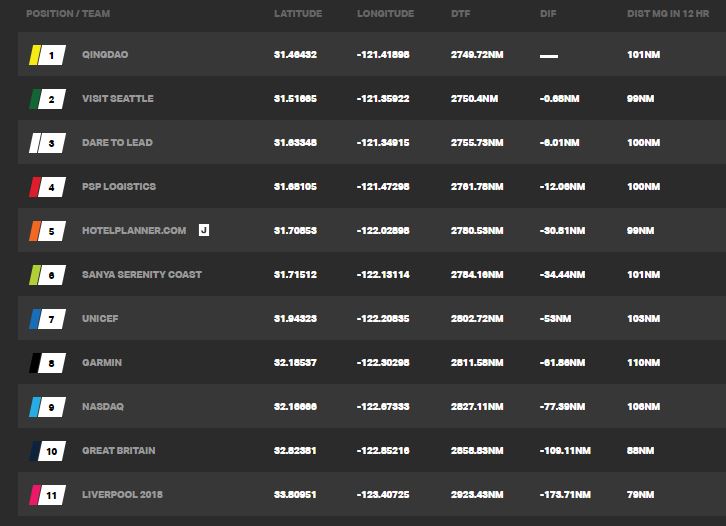 Speaking from onboard, Qingdao Skipper Chris Kobusch reports: “A few hours ago, we rounded the virtual mark ‘Denford’ in close company with Visit Seattle, Dare To Lead, and PSP Logistics. Just before the wind increased, and while passing the mark only a few boat lengths away from Visit Seattle , we quickly had to peel from the Code 1 (Lightweight Spinnaker) to the Code 2 (Mediumweight Spinnaker).

“Whilst we were busy changing kites, Visit Seattle gybed and once our Code 2 was flying, we followed suit.”

Qingdao, Visit Seattle , Dare To Lead and PSP Logistics remain in the leading pack, and it looks to be a very tactical next 24 hours, as the teams race south towards the Elliot Brown Ocean Sprint, the first opportunity to score bonus points in Race 10.

PSP Logistics Skipper Matt Mitchell is quietly confident, saying: “Later on today we should be starting the Elliot Brown Ocean Sprint and by the looks of it, we should have some good wind. The miles are falling away at the moment and fingers crossed we keep the breeze for a good while yet.”

Mid-fleet teams are also benefitting from the sustained breeze and HotelPlanner.com and Sanya Serenity Coast continue to drag race, with less than four nautical miles separating the two boats. HotelPlanner.com Skipper Conall Morrison comments: “It was a good day at the office today and we have been in close contact with Sanya Serenity Coast all day. They appear to be a little faster, but we have maintained a better downwind angle so much of a muchness really.”

Now the fleet is heading towards Mexican latitudes, the long awaited warm temperatures are beginning to kick in.. For Nikki Henderson, Skipper of Visit Seattle , it is a landmark moment as she reflects: “Two months ago, a week out of Sanya, it started to get cold and I remember thinking ‘right two months of shivering and it will be back to warmth’ and now we are at that point – crazy!”

Looking ahead, Clipper Race Meteorologist Simon Rowell reports the high driving favourable winds are set to stay for the coming days, with the frontrunners in particular to benefit from the sustained breeze for the upcoming Elliot Brown Ocean Sprint..