After a week of racing around the clock in Race 11: Nasdaq Race, the Clipper Race fleet has been keeping everyone guessing as to their Scoring Gate tactics. The Scoring Gate allows the first three teams that reach it to pick up three, two, or one bonus race point and is a favourite point scoring mechanism for some of the teams.

Whilst Scoring Gate regulars Qingdao and the rest of the leading pack opted out, with Garmin Skipper Gaëtan Thomas citing the uncertainty of so many teams remaining in Stealth Mode, the path was cleared for the teams further back in the fleet. Visit Seattle Skipper, Nikki Henderson, explains: “Last night we pulled our hair out for a few hours going back and forth - to the Scoring Gate or not to the Scoring Gate?

“It was a gamble, but we took it - expecting at the time to come out with one point. So, lo and behold when the scheds came out I nearly fell of the chart table seat! It looks (although I don't know for sure just yet) that no one went - so that was good news for us. Gamble paid off. Great stuff.”

Visit Seattle was followed towards the Scoring Gate by Liverpool 2018, though the results will only be confirmed once formally announced by the Clipper Race Office. 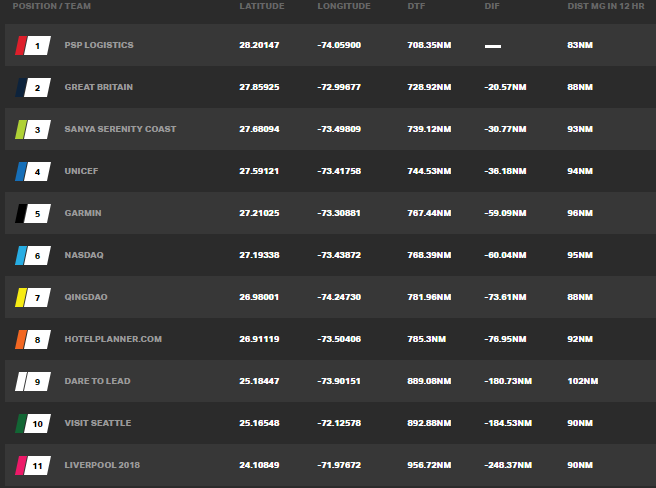 On board Sanya Serenity Coast, which took a middle routing to enable them to have the option of heading to the Scoring Gate, the team is making up the lost ground after deciding to focus on race position. Skipper Wendy Tuck says: “So now we are trying to make up what we lost out, we still have over 700nm to go so we are trimming, trimming, and trimming. I think those off watch sleeping are dreaming of trimming.”

Across the fleet, teams are enjoying life at less of an angle and as they gear up for the upcoming Elliot Brown Ocean Sprint, the teams are making strong progress under spinnaker towards New York. Qingdao Skipper, Chris Kobusch, reports: “Since we passed the Mandatory Gate Graves, the wind has slowly eased and veered which means we have had a flat boat and the spinnakers up again.

“The temperature has dropped a little bit and the stars are out tonight, too. All in all, champagne sailing conditions. And it looks like we will have these at least for the next 250nm until we get to the Elliot Brown Ocean Sprint, where the forecast suggests an increase in wind again - luckily not in direction though.”

With just 700 nautical miles left for leading team PSP Logistics, and points up for grabs in the Elliot Brown Ocean Sprint, it will be interesting to watch how the final race of the penultimate Leg of the 2017-18 edition plays out in the coming days.

The 1,900nm race to New York is expected to take approximately 12 days, arriving at Liberty Landing Marina between 14-16 June. To follow the progress of the teams, keep an eye on the Clipper Race Viewer. You can also read the Skipper Blogs in full in the team pages or learn more about life on board in the Crew Diaries.

The Clipper Race fleet leading pack has left the Caribbean behind and arrived in the Atlantic Ocean proper, but with many teams remaining in Stealth Mode, a mystery over whether anyone will go for the bonus points on offer in the Scoring Gate is developing…

In just 50 days’ time, the Clipper 2017-18 Round the World Yacht Race will be reaching a thrilling climax as the fleet sprints up the River Mersey in a spectacular first-time crowd-facing finale which will conclude outside the historic Royal Albert Dock Liverpool, UK, on…

Whilst yesterday’s game of snakes and ladders continues to disrupt the leaderboard, Day 4 of Race 11: Nasdaq Race has…