After an intense eleven days of racing across the North Atlantic Ocean, the mood across the fleet is that the sprint is very much on for both the Elliot Brown Ocean Sprint, and the finish line in Derry-Londonderry.

Speaking from on board, Liverpool 2018 Skipper Lance Shepherd said: “We should get southerly winds allowing us to point straight to Derry-Londonderry and hopefully straight over the Elliot Brown Ocean Sprint. However, the wind strength at the end of the sprint looks like it is tailing off so fingers crossed it will stay with us.” 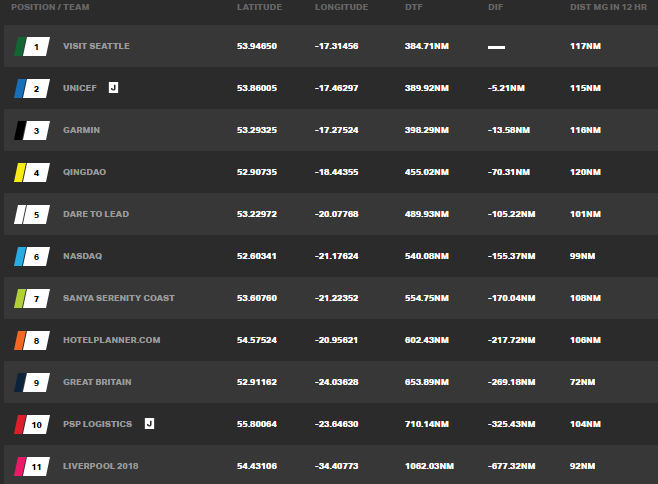 On Visit Seattle, which is currently leading the pack, Skipper Nikki Henderson isn’t so confident that the team will gain any sprint points as they opted to focus on maintaining a stronger position in the fleet. She says: “It's fair to say we pushed the boat to its limit, just not really in the right direction for the Elliot Brown Ocean Sprint. We decided to keep sailing our race - and try to sail really fast.”

With less than 400nm laying between the front of the fleet and Derry-Londonderry, the fleet has enjoyed a quick race across the North Atlantic from New York. However, lingering over Ireland is a giant wind hole which could scupper tactics dramatically as the fleet edges closer to the finish. Speaking about the forecasted conditions, Qingdao Skipper Chris Kobusch says: “We are pushing hard to try avoid that huge wind hole the forecast shows developing west of Ireland, but it seems the whole fleet will park up there.”

One team that may be able to use this to its advantage however is Liverpool 2018 and Skipper Lance is monitoring fleet progress carefully as teams approach the wind hole. He comments: “It will be very interesting to see if Visit Seattle and Garmin manage to stay ahead of the wind hole as they have been cracking out some amazing speeds and I wonder how it will mix things up mid fleet. We will just keep doing our best to eat the miles and get to Derry-Londonderry ASAP!”

The first few teams have commenced the Elliot Brown Ocean Sprint but with two boats in Stealth Mode and some tricky weather conditions, it’s an edge-of-the-seat kind of sprint for Race Viewer fans.Clipper Race Meteorologist Simon Rowell has advised the eleven strong fleet of the…

After no points were issued for any teams for Race 9 (Leg 6), the Clipper Race Committee has finalised the penalty points to be given to teams following the assessment of damages and repairs needed after Race 10 and Race 11 (Leg 7) up until…