Whilst the battle for the Race 12 podium was settled during the early hours today by victorious Visit Seattle, which crossed the finish line at 00:21UTC, followed by Unicef (04:32UTC) and Garmin (05:13UTC), the pressure remains on for the rest of the fleet as teams push for their best possible race results.

Fourth place looks to be Qingdao’s to lose at it makes good headway towards Derry-Londonderry, despite nearest competition Dare To Lead maintaining a 1.5 knot speed over ground (SOG) advantage.

In what should be the final blog of the race for Qingdao, Skipper Chris Kobusch reports: “For once the dreaded wind hole was not too bad and we made steady progress over the past 24 hours. We are now less than 30nm away from the finish, the breeze is still blowing with 10 knots from the north and it looks promising that we will arrive in Derry-Londonderry today.”

Racing is just as gripping further down the leaderboard and it will be interesting to watch how the final 200nm of Race 12 plays out for HotelPlanner.com, Sanya Serenity Coast, Nasdaq and PSP Logistics.

HotelPlanner.com, led by Derry-Londonderry local Conall Morrison, and PSP Logistics, led by Matt Mitchell, are descending upon the finish line from a northerly course, with the latter team waiting to see how well the bold northerly tactic will have paid off 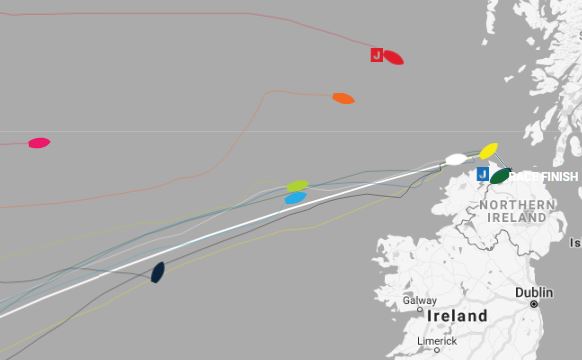 Hotelplanner.com Skipper Conall is looking forward to racing into his home port after a fast and frustrating race. He reports: “It is disappointing to see boats that we were ahead of sail in more breeze and pass us during the last couple of days mostly due to routing decisions made a week ago, that is ocean sailing for you.

“Big shout out to Skipper Matt Mitchell and the PSP logistics team for making the bold decision and sailed a lot of extra miles to avoid this high pressure.”

Further south, the match race between Nasdaq and Sanya Serenity Coast continues and it will be down to the wire for the two teams. Nasdaq Skipper Rob Graham says: “What a tortuously slow end to the LegenDerry Race. Nasdaq has hardly moved in the past 23hrs as we drift around the windhole under a ridge of high pressure. Sanya Serenity Coast has just appeared on AIS, so after two weeks and 3,000nm our little race-within-a-race comes down to this!”

For GREAT Britain and Liverpool 2018, which are pushing through the final 330nm and 550nm respectively, the end to Race 12 is in sight. Despite sitting in eleventh place, Liverpool 2018 has done remarkably well in making up ground on the fleet after diverting to Newfoundland, Canada, to medevac a crew member earlier in the race. The Liverpool 2018 team also received the excellent news that it has scooped the maximum three bonus race points as the winners of the Race 12 Elliot Brown Ocean Sprint this morning. Garmin was second and picks up two points whilst third fastest team, Qingdao, picks up the final bonus point.

Stay glued to the Clipper Race Viewer today to watch how the battle for Race 12 leaderboard positions plays out.

Race winners Visit Seattle and podium teams Unicef and Garmin will be arriving onto the pontoon in Derry-Londonderry from midday local time on Monday 9 July. Any changes or updates to the time will be made on the Clipper Race ETA page, and weather depending, the arrival will be broadcast on the Clipper Race Facebook Live Page.

With just over 100 nautical miles remaining for the leaders, Race 12: The Legenderry Finale is playing out for the…