The final race of the global circumnavigation series, Race 14 from Den Helder to London, starts today in The Netherlands. It’s going to be one of the most nail-biting yet with just six points separating the top two teams when there are still twelve points up for grabs.

The Departure Ceremony at Willemsoord Marina in Den Helder started at 0945 local time with the the boats slipping lines in front of members of the Dutch Navy. (0745UTC)

The fleet will reposition just offshore to perform a Parade of Sail from 1245 to 1315 local in Marsdiep prior to making its way to the start line, marked by Dutch Royal Navy ship ZrMs Luymes.

The parade will be led by Dutch Royal Navy sail training ship Urania. Spectators will get a good view of the race start at 1400 local (1200UTC) along the sea wall near the Texel ferry departure point in Den Helder.

A cannon will be fired from Urania to mark the start of the final race of the series, a relatively short 30 hour sprint to conclude the marathon ocean odyssey.

Race Director Justin Taylor said Race 14 is in effect a coastal race sprint: “This race will be extremely tactical as we have a classic North Sea forecast with a moderate south west breeze and of course the tidal influence, especially on the eastern coast of the UK.

“It will predominantly be an upwind race which will encompass a fair amount of intensity to the navigational hazards that will be encountered, including large volumes of commercial shipping, oil rigs and shifting sandbanks.

“Out of three options we have selected a length of route which will ensure the fleet finishes off Southend sometime on Friday afternoon/evening. This decision has been taken to take account of the expected prevailing weather conditions and will allow the Skippers and crew some rest before the Parade of Sail and entry into Saint Katharine Docks starting from Southend (at 0330UTC / 0430 BST) on Saturday morning.”

The route for Race 14 exits the Marsdiep via the main channel and heads south of the TSS (Traffic Separation Scheme) off the Island of Texel and then turns west across the North Sea towards the east coast of the UK (near Great Yarmouth).

After a turning mark, they will head south towards the Thames Estuary before rounding a final turning mark and proceeding through two mandatory gates (King’s Channel Gate and Warp Gate) and then onto the Race finish off Southend Pier.)

BATTLE TO THE BITTER END

The whole fleet is engaged in various battles for vital points, whether for podium places, the top half of the leaderboard or individual places further down.

“The most exciting battle is for first and second with just six points separating them,” added Justin Taylor. “Derry~Londonderry~Doire needs a very good result and LMAX Exchange a very bad one, so I expect classic race tactics with Olivier covering Dan move-for-move throughout the entire race.”

LMAX Exchange leads with 142 points vs Derry~Londonderry~Doire on 136 points. Both teams have had four penalty points each. However Dan’s team has picked up 20 bonus gate and sprint points vs Olivier’s 17 bonus points.

On the dockside ahead of departure the two leading skippers squared up to each other, boxing style, to set out their ambition to knockout their opponent and psyche each other out. 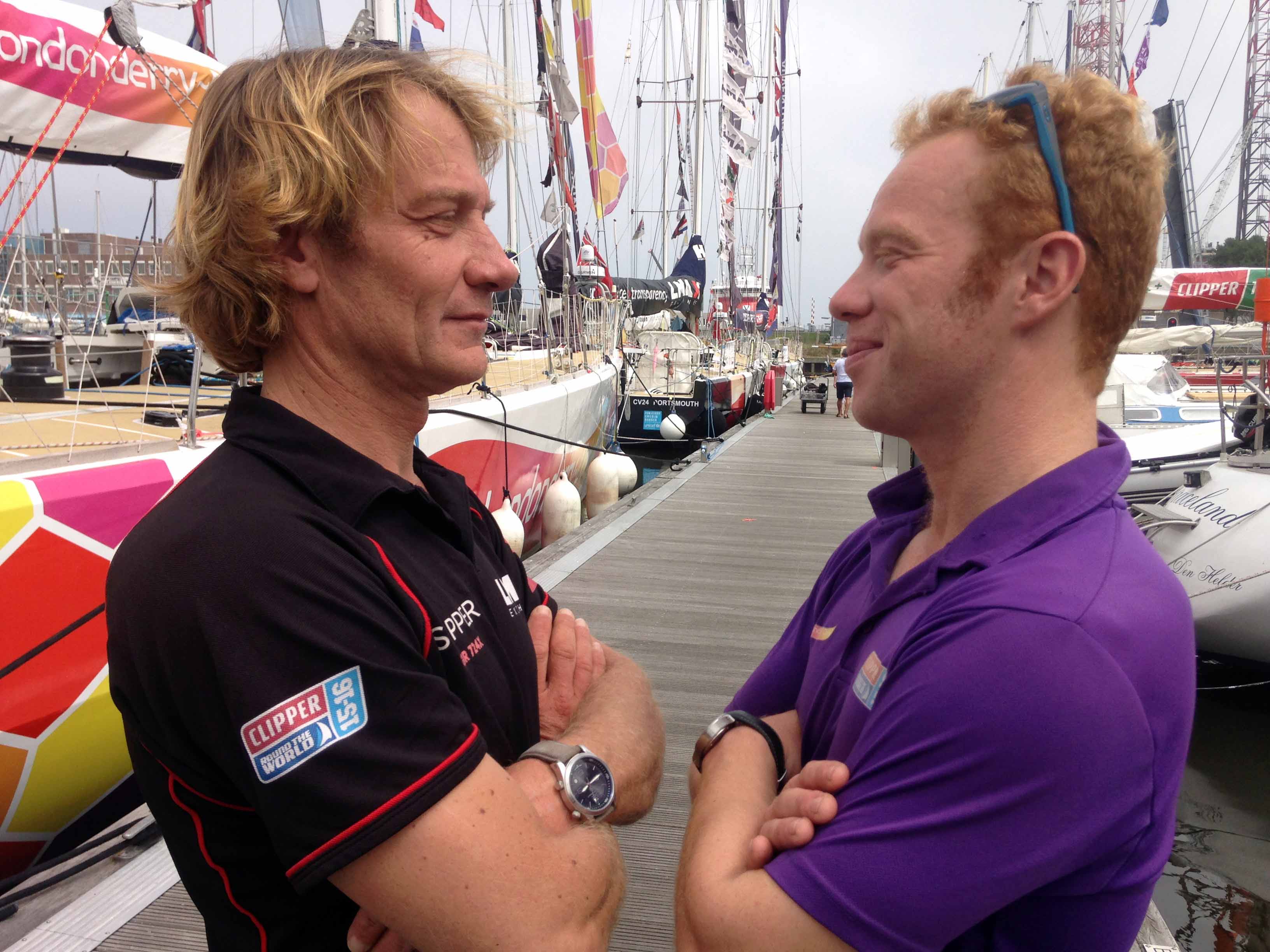 LMAX Exchange skipper Olivier Cardin claimed he is confident of holding onto the lead: “Six points is not too much, but it is enough if we do not make a mistake. I will not be far from him; it’s part of the game…It will be intense.”

Dan Smith said the whole crew aboard Derry~Londonderry~Doire are going all out to win: “At this stage we’ve got nothing to lose; six points isn’t a lot and in yacht racing things break, things can go wrong, anything can happen so we’ll be pushing hard. There’s a lot of boats on very close points so a lot of them will be pushing very hard. I don’t think there’s going to be a lot of sleep on any of the boats. It’s going to be a race right to the end.”

See this video for an entertaining look at the rivalry between the two Skippers. 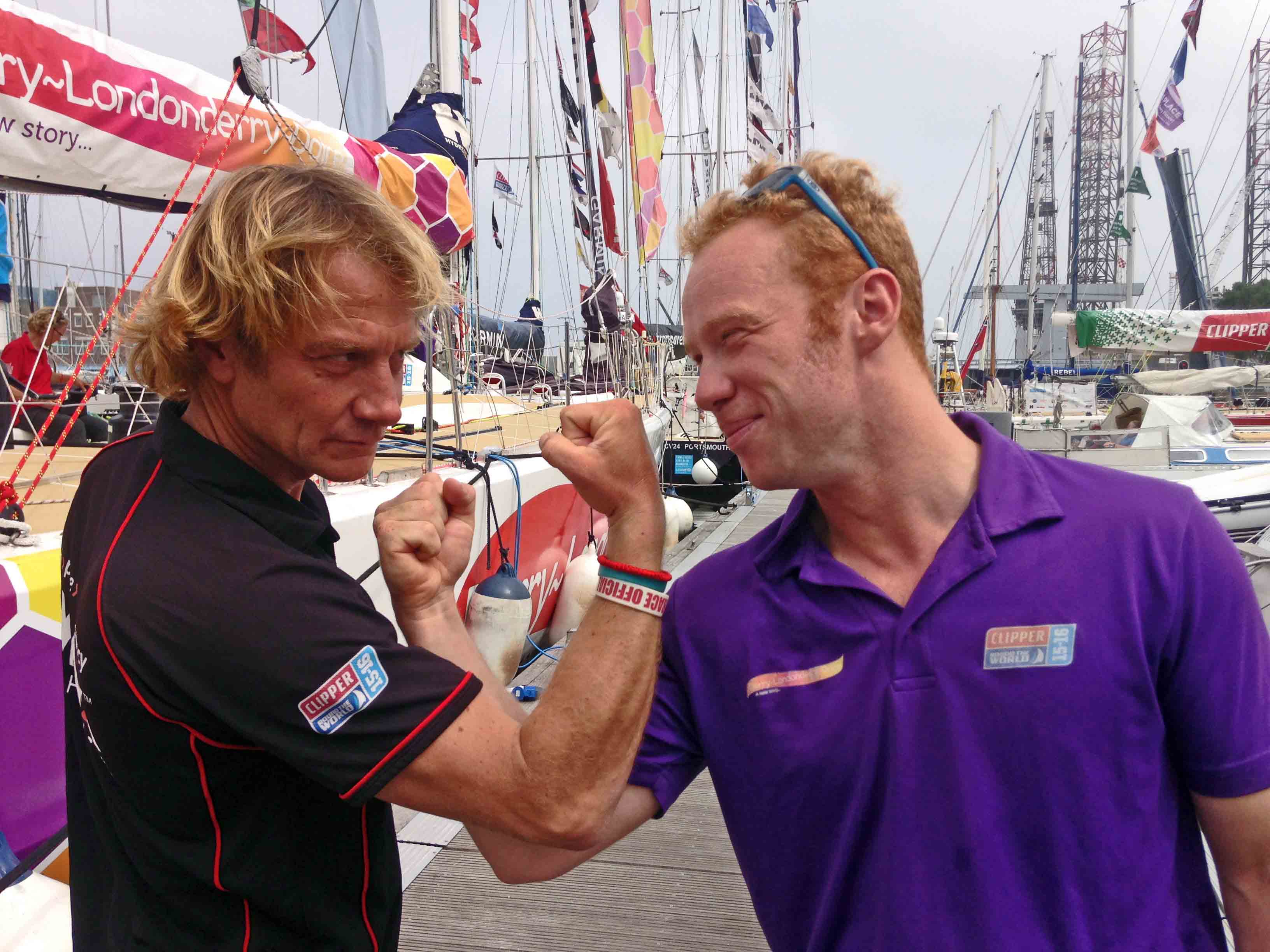 Similarly in third and fourth places respectively are GREAT Britain, aiming to hold onto its podium place, and Garmin, also separated by six points.

Fifth to eighth places are all tied on 72 points for ClipperTelemed+, Da Nang – Viet Nam, Qingdao and Mission Performance. Visit Seattle sits in ninth place with 65 points, Unicef in 10th with 61 points, and the final two just one point apart in eleventh and twelfth: PSP Logistics on 47 points and IchorCoal on 46 points.

In the event of a tie, the number of highest finishes in previous races will determine the order.

To see all the details for the London Race Finish and Parade of Sail on the River Thames, click here.

Sailing into The Netherlands on the penultimate race of the series in first place was a very special moment for Dutch round the world crew member Jan Van de Laar.Jan, 32, a visual effects producer for films from Tilburg in The Netherlands, signed up to…

Sue Ball is a circumnavigator on PSP Logistics, and as if sailing round the world wasn’t a big enough challenge in itself she also took on the role of Team Coordinator before Race Start from London last August. While Sue has been taking…