Over the last two days of racing a high-pressure system has consumed the lead Sanya Serenity Coast held for the majority of Race 3: The Dell Latitude Rugged Race across the Southern Ocean. As a result, Visit Seattle is now leading with less than 400 nautical miles until the finish in Fremantle and podium places are all still for the taking.

After opting to hide its position from the rest of the fleet, by using Stealth Mode yesterday, Visit Seattle has reappeared on the Race Viewer ahead of both Sanya Serenity Coast and PSP Logistics, but all three teams are still struggling with the light winds that have entrapped them.

“But never fail we have not given up, we are trying to get every minuscule of speed out of our mighty ship.”

PSP Logistics is still holding onto second place but Skipper Matt Mitchell is also frustrated by their current progress: “Well, this is annoying. Initially we made good speed into the high but for the last 12 hours we've been doing anything from one to five knots as zephyrs trickle past us. As expected while we have been stopped the guys behind have caught up considerably, this morning Chris and his team kept the wind to come up on us and they are now eight miles to the north.”

Currently in third place, Qingdao Skipper Chris Kobusch said: “The wind hole brought the fleet back together and everyone seems to struggle to keep the boats moving. We are putting all our efforts in to keep the apparent wind high and therefore at least maintain a little bit of speed, which so far seems to work quite well.” 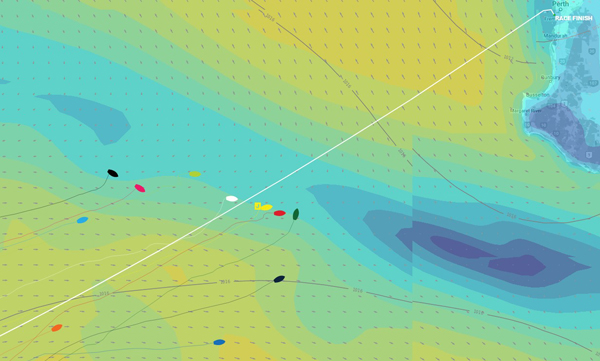 IMAGE: Fleet positions and wind speed at time of publishing

On board fourth-placed Dare To Lead, Skipper Dale Smyth is hesitant to predict what the effect of the wind hole will eventually be saying: “Who knows what the result on standings might be with these conditions and huge leads have already been lost. Everyone is in better spirits now that the ocean seems less hostile and when this wind hole fills through we will truly be on the home stretch.”

For sixth-placed GREAT Britain, in the words of its crew, focus is on reaching Fremantle: “We are sailing with a quiet determination, with dignity, we are proud of what we have achieved but humbled by events.”

Liverpool 2018 and Garmin, in seventh and eighth respectively, with the fairer weather and light airs are preparing to maximise their time off in Fremantle by starting their jobs list early, whilst still hoping their progress won’t be as slow as the current leaders. Liverpool 2018 Skipper Lance Shepherd said: “We have all fingers and toes crossed that the wind hole won't be too bad and will play out for us but we are on the same track as Sanya Serenity Coast which has been severely parked up for a couple of days now.”

It’s a Happy Thanksgiving from on board Nasdaq and, whilst the team doesn’t have any turkey, they do have wind and are making good progress towards Fremantle. Skipper, Rob Graham said: “The wind is favourable, the sea is almost flat and the sun is shining. We have been able to keep up a steady 10+ knots directly towards Freo, whilst the fleet updates show the boats ahead of us parked up in another (hopefully the last) wind hole.

“However, we're not counting our (turkey!) chicks until they've hatched, as we still have 600+ nautical miles to go, and Hotelplanner.com is catching us as fast as we're catching the leaders.”

HotelPlanner.com is also feeling hopeful that they will avoid the dreaded wind hole ahead. Skipper Connall Morrison said: “The crew are eagerly watching us gain miles on some of the other boats that have been stuck in the wind hole that we are really hoping to avoid! The weather reports look promising but you can never guarantee anything in the ocean so we will make the best of the wind while we have it.”

Simon Rowell, Clipper Race Meteorologist, reports that the high-pressure system should shift to leave good downwind conditions for the race to the line with estimated arrivals into Fremantle looking to be between 24 -26 November.

Race 3 Day 21: SUPPORT STREAMS IN AS TEAMS COUNT DOWN TO FREMANTLE

As the Clipper Race teams look ahead to arriving in to Fremantle later this week, Skippers from across the fleet…

Race 3 Day 19: A TIME OF QUIET REFLECTION ACROSS THE FLEET

BANNER IMAGE: Qingdao take a moment to reflect Racing has taken a back seat over the past 24 hours for…