It’s shaping up to be an incredibly close finish to Race 3: The Dell Latitude Rugged Race with less than 70 nautical miles separating the top seven teams. PSP Logistics Skipper Matt Mitchell, currently in fifth, says: “4500 miles of racing and it will all come down to the last 30 hours or so. It really could be anyone's race at the moment and pressure is on to keep the boat going as fast as possible.”

For a second successive day, a new leader has revealed themselves after Unicef re-emerged from its invisibility cloak in pole position at 1800 UTC last night following spending the previous 24 hours in Stealth Mode. The team’s tactics of staying on a southerly route proved to pay off with GREAT Britain, who had also stayed south, not far behind in second place.

Unicef Skipper Bob Beggs explains the team’s improved performance but is not resting on his laurels: “The weather has been kind over the last few days, all downwind under spinnakers with reasonable boat speed. The fleet is all very close which makes for an exciting finish.

“We have our friends, GREAT Britain currently on AIS (Automatic Identification System) just nine miles to leeward creeping up on the outside. The atmosphere is always better when the yachts all arrive very close together.”

The crew of GREAT Britain have dug incredibly deep to move into second place after the tragic events of last weekend and have said: “Team GREAT Britain's spirit is slowly returning to the GREAT boat. Last night it dawned on us that we have still got a really good chance to do well in this race.

“This could be the ultimate tribute to Simon Speirs, to get the podium finish that we have all hoped for since we started the race. It would be very fitting as Simon was secretly one of the most competitive on the boat.”

Many of the teams further north have continued to struggle with little wind and Nikki Henderson Skipper of Visit Seattle, which dropped to third place after holding the lead yesterday, said: “I think we all mentally and emotionally prepared ourselves to be nearing the finish right now - 290 miles has never felt so far.”

Just behind there’s less than 20 nautical miles separating Qingdao, PSP Logistics, and Dare To Lead currently in fourth, fifth and sixth with PSP Logistics Skipper, Matt Mitchell commenting: “We are starting to get more boats in sight now as Dare To Lead has popped up on the AIS (Automatic Identification System) over the last half an hour.” 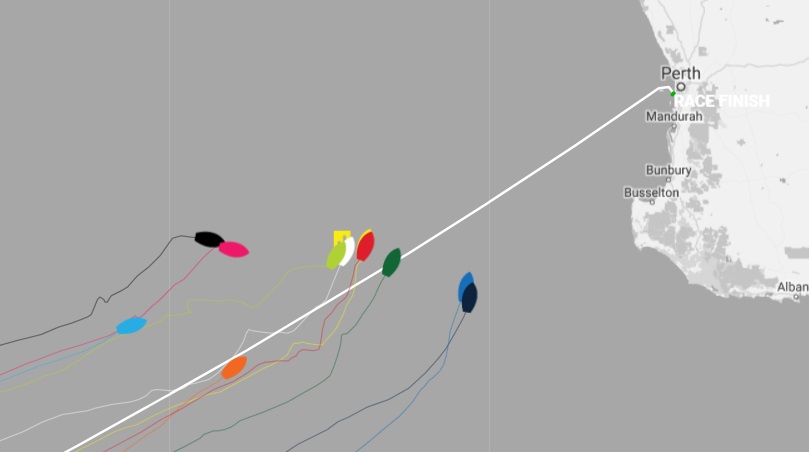 After leading for much of the race, the wind hole has been a particularly frustrating experience for Sanya Serenity Coast, which today slipped to seventh place but Skipper Wendy Tuck remains philosophical: “Even though we are not where we would like to be, it is lovely sailing out here right now, blue sky, blue seas, warm temperature - all in all a nice day. Best news is we are moving - after parking up for 24 hours, movement is good.”

Further back, both Liverpool 2018 and Garmin, eighth and ninth, have also been unable to escape the wind hole and Garmin Skipper Gaëtan Thomas explains: “We had a good plan to pass through the wind hole and the hole moved right where we were. We weren't that good in the leaderboard anyway but one of our last chances to gain some places just disappeared.”

With around 450 nautical miles to go, HotelPlanner.com is currently in tenth position after Nasdaq went into Stealth Mode. It will re-emerge again at 1800 UTC today and, in the meantime, Skipper Rob Graham has eschewed talk about sailing to praise the work of the Clipper Race Maintenance Team: “The maintenance guys do a fantastic job of getting everything done to schedule at stopovers, and as Skippers and crew our end of the deal is to help where we can, often that involves staying out of their way and just letting them get on with it, provide them with coffees by day…and beers by night.”

For an idea of when each team is expected to cross the Finish Line, please see the Estimated Arrival Times on the Clipper Race website.

In the past 24 hours, HotelPlanner.com was the final boat to cross the finish line of the Elliot…