It’s been another busy day for the fleet as teams zigzag north to the Sydney finish line trying to avoid the windholes, with some teams far more fortunate in the game than others.

Qingdao leads the fleet for the third consecutive day and also picked up three extra points after being first across the Scoring Gate. The battle for the lead continues with Visit Seattle, which crossed the gate second to claim two points and has since elected to go into Stealth Mode, and Sanya Serenity Coast which crossed in third place.

Qingdao Skipper Chris Kobusch, who is pushing hard for his team’s first podium finish, says he spent most of yesterday searching for wind, which filled in the late afternoon.

He adds: “With the first wind shift to the west we tacked away from Visit Seattle and managed to gain some miles on them. Enough to stay in front until the Scoring Gate and to score the three extra points. When we crossed the line, Visit Seattle was only four miles behind and Sanya Serenity Coast, back out of Stealth Mode, eight miles.

“Since then we have been sailing upwind (not our greatest strength as it looks and we haven't quite figured out why yet) and Sanya Serenity Coast is now only 2.5nm behind us. Visit Seattle is in Stealth Mode, but I’m sure Nikki and her team are close by as well. So, as it looks it will be a drag race to the finish.”

Whilst we won’t know the team’s precise location until it comes out of Stealth at 1800 UTC, Nikki reports a positive experience saying: “Just gorgeous sailing today ... as Phil and I said to each other - we were in our happy place. 15 knots, close reaching with full white sails, a wonderful flat sea, current with us, pointing in the right direction and sun out. Absolutely wonderful.” 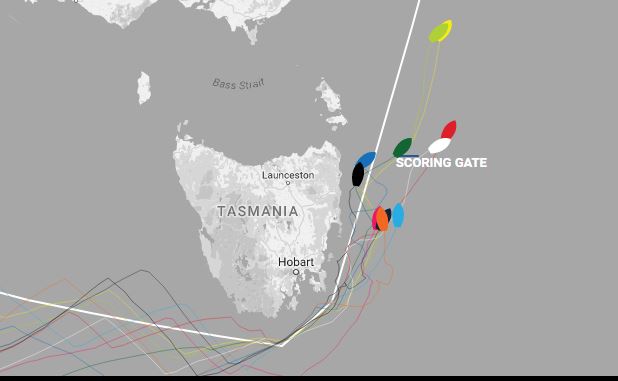 PSP Logistics is the latest team to enter Stealth Mode and will next appear on the Race Viewer at 0600 UTC tomorrow. Skipper Matt, who had been creeping up on the leading pack yesterday, explains: “Thankfully we have picked up speed overnight as we decided to head offshore away from the Tasmanian coast. So far that is looking like the right decision as some of the other boats looked to have been struggling.”

Looking ahead, Matt adds: “We have another light wind patch on the way and we are fervently hoping that it won't last too long, and it affects others more than us! (Sorry everyone!)”

With PSP Logistics and Visit Seattle hidden, its Dare to Lead next,followed by Unicef, with both Skippers reporting a frustrating time trying to make progress and finding the best routes in the light winds. Garmin follows, having elected to take the furthest in-shore route, hugging the west coast of Tasmania, giving it a good view of land and the local wildlife.

The teams most affected by the windholes yesterday, which resulted in some snake like descents down to the depths of the leaderboard are HotelPlanner.com and GREAT Britain, currently occupying the bottom spots.

Skipper Conall Morrison of HotelPlanner.com explains: “Not much wind last night has made for frustrating times. We had previously gotten excited as we approached the stalled fleet from the south, more offshore from Tasmania, hoping for less of a wind shadow. Watching 10 knots of boat speed turning into 2 is tough, but that is sailing.”

Hotelplanner.com’s loss turned out to prove a gain however for Liverpool2018 and Nasdaq, as both teams managed to get on the ladder and overtake, bettering their race hopes.

Despite sailing into their own windhole and getting caught in light winds for 15 hours yesterday, Lance Shepherd, Skipper of Liverpool2018, in seventh place, says the team managed something to be happy about. He explains: “We came up on them (HotelPlanner.com) last night and crawled our way past at a rip-roaring pace of 3 knots an hour, with all of the crew glued to the Nav Station. We've also managed to pull ahead in front of GREAT Britain but I can see that Andy and his team have some slightly faster winds than us and they are hot on our tail.”

The most positive leaderboard progress of the day however, goes to Nasdaq, with Skipper Rob reporting: “After the drama of yesterday's kitemare, Nasdaq has had a quieter day although equally busy as we try to pick our way through a light and variable patch of wind East of Tasmania.

“Significant changes to wind strength and direction mean lots of trimming and sail changes - we've lost count of the number of times the Yankee 1, Staysail and WindSeeker have been hoisted and dropped since we past our race mark 'Mitchell' last night.

“All of that work seems to have paid off, because Nasdaq has come from 30+ nm behind to right back with the little group of HotelPlanner.com, GREAT Britain and Liverpool 2018 (G'day mates) who are all blinking on and off my AIS screen as I type. We've also been lucky to have found a patch of South Westerly wind that wasn't in the forecast at all, but is certainly doing us a favour.”

With further light winds forecasted, the Snakes and Ladders game may well continue as the final stages of Race 4: The Tasman Test plays out. Which teams will win and which will lose are still to be decided! Stay tuned and follow the drag race to the finish!

The Clipper Race is not only the race of their lives for crew, but for the many supporters who wake at all times of night to check the Race Viewer, or follow their loved ones to stopovers all over the world.Bronwen Vearncombe ticks both of…

The Clipper Race reached a momentous milestone this week as the amount raised for Unicef by staff, crew and supporters topped the £200,000 mark, meaning that we are over halfway towards our £400,000 target for the Clipper 2017-18 Race edition!At the start of the race,…