After crossing paths with Qingdao, which has slipped from first to third place following an unfavourable tack, Sanya Serenity Coast Skipper Wendy Tuck cannot quite believe how close her team now is to Nikki Henderson’s Visit Seattle. She said: “Well this is just mad, after so many days racing and with 100 miles to go, we could high five the team on Visit Seattle, they are close! It might look close on the Race Viewer, well its closer in real life.”

But for Wendy, who is Skippering her second consecutive Clipper Race team entry, there is no time for complacency as she heads towards her Sydney hometown as she adds: “It has been an exciting race, so glad to have such great teams to race against, nothing is ever certain, every little bit you get a head could all just go crashing down so easily.”

On board Visit Seattle, Skipper Nikki echoes Wendy’s thoughts as she takes a moment to reflect on the race. She comments: “The last 500 nautical miles has seemed never-ending as we zig zag our way very, very slowly up the coast.

“It's been an absolute pleasure to sail with this fabulous crew this leg. Our highest male to female ratio so far of almost 50:50, with some great characters and a general good feeling atmosphere.”

With the end so very nearly in sight for the top three teams, and a spectacularly close finish on the cards, each of the Skippers are eagerly awaiting the arrival of a wind shift from the south to help them along the way to Sydney.

Qingdao Skipper Chris Kobusch explains: “Just over 100 nautical miles (nm) to go. Unfortunately, we lost our lead last night on one terrible tack and are now in third position, behind Sanya Serenity Coast and Visit Seattle.

“The weather forecast suggests a wind shift to the south west, which would help us massively clearing the headlands in front of us. Without, we will have a long and unfavourable tack ahead of us.” 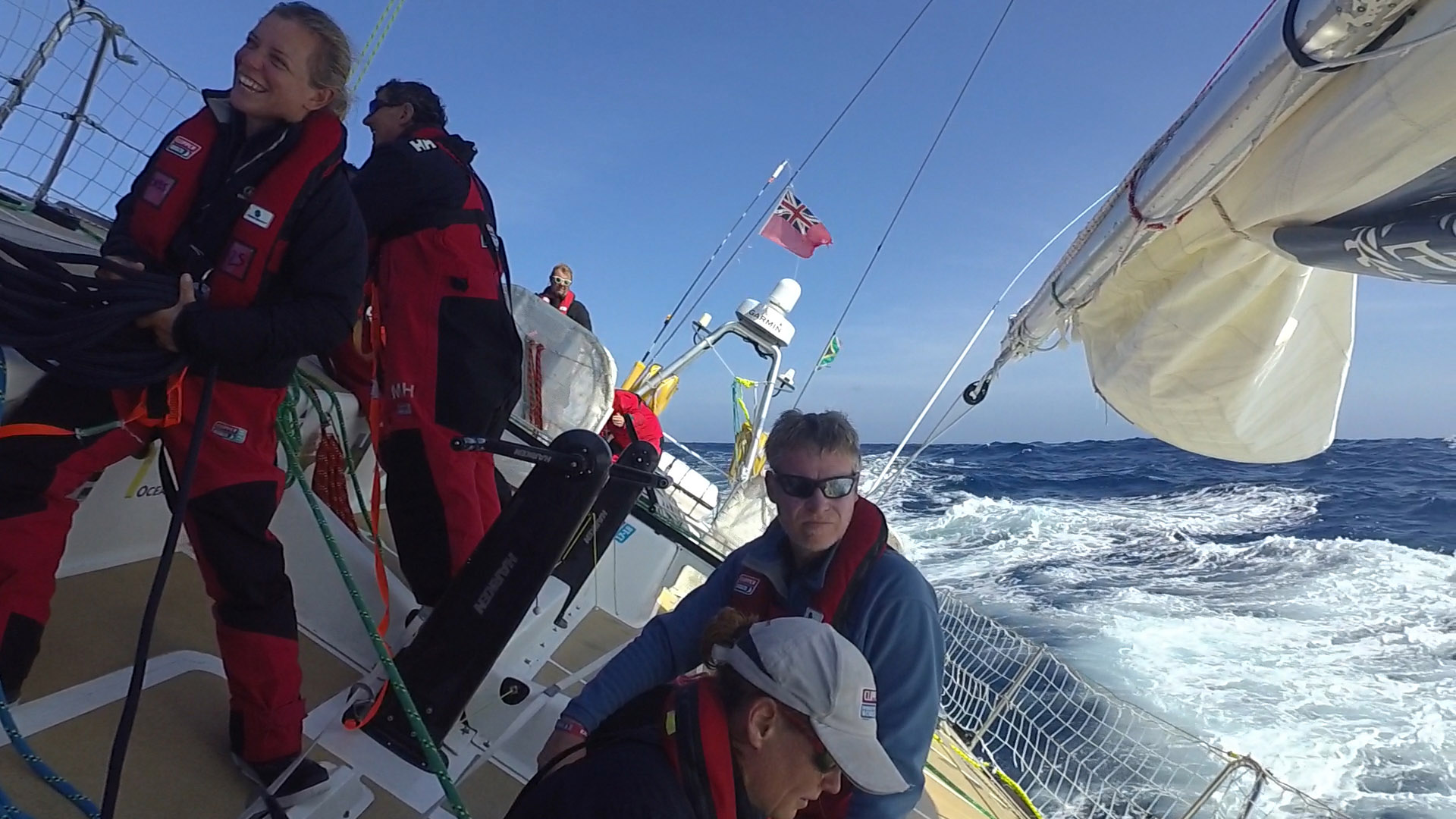 Photo: Racing on board Dare To Lead yesterday.

Following the leaders, PSP Logistics and Dare To Lead continue to make up the mid-pack remaining in fourth and fifth place and both report tricky upwind conditions as they push to claw back some miles on the leaders. PSP Logistics Skipper Matt Mitchell reports: “Well, this upwind stuff is getting tiresome! Thankfully the wind is due to shift around to the south over the next few hours giving us a last push before we arrive in.”

Andy Burns, Skipper of GREAT Britain, is already experiencing the Southerly winds that the leading pack are hoping for and says: “We are in the mix with Garmin, Nasdaq, HotelPlanner.com and Liverpool 2018. All, I’m sure, extremely keen to ride this southerly we are experiencing into Sydney Heads.”

With the last half of the fleet so tightly compacted, and mostly in sight of each other, teams have had a busy 24 hours and are making frequent sail changes to try and get ahead as they continue their drag race towards Sydney.

Nasdaq emerged from Stealth Mode at 0600 this morning and although currently sitting in tenth place, has been fluctuating up to eighth through the morning. Skipper Rob Graham explains: “We have spent most of our supposedly secret 24 hours within sight of GREAT Britain and/or Liverpool 2018, so unless that cloak of invisibility is operational, we're not so sneaky after all.”

Looking ahead, the favourable southerly winds should kick in for the top half of the fleet over the next couple of hours and there will also be localised thermal effects with land and sea breezes for teams to consider as they approach Sydney. With so much still to play for and podium positions still very much up in the air, Race 4 is set to be the closest and most compelling race finish of the series so far.

It has been a day of contrasts for the fleet on Day 9 of Race 4: The ClipperTelemed+ Tasman Test. After surfing down waves at 20 knots in the Southern Ocean, and rounding Waypoint Mitchell (the race mark that took the fleet South of Tasmania)…