Race 7: The Lakewood Hills, Zhuhai Race is underway. The eleven strong fleet of 70ft racing yachts lined up in the sunshine to slip lines, leaving the Subic Bay Yacht Club behind on Sunday 23 February at 0400 UTC (1200 LT).

The race will cover a route of 1600 nautical miles, concluding back at Subic Bay Yacht Club and is expected to be completed within eight to ten days, arriving between 2 and 4 March.

Tim Chaning-Pearce from Ha Long Bay, Viet Nam says “I think it’s going to be a good little tactical battle… we are going to collect all the points! I think we are even more hungry after getting third place in the last race, so we are going to go hard!” 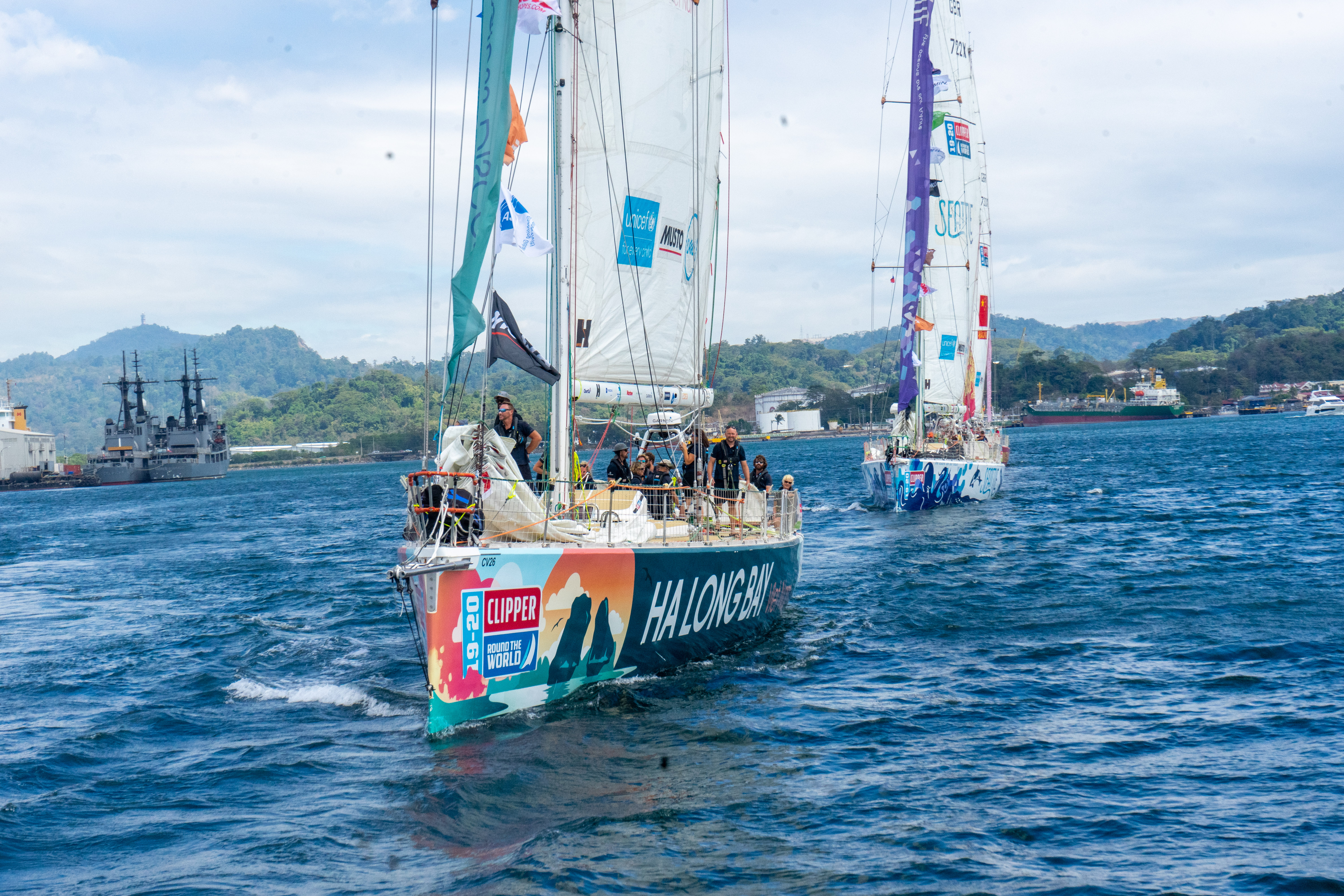 The new route for Race 7 will see the Clipper Race fleet head north from the Philippines, across the Luzon Strait and around the western most cluster of the Japanese Ryukyu Islands. The teams will then race downwind, east of Taiwan, and battle against the notorious Japan (Kuroshio) Current, which flows north and east of Taiwan, before heading back to Subic Bay.

Following a vibrant Parade of Sail, with the mountainous landscape as the backdrop, the race started at 0600 UTC (1530 LT). The horn was sounded by a Race Crew Supporter who earned the right to start proceedings, following an auction, with the money raised going to Unicef UK.

Punta del Este was the first of the fleet to cross the start line, closely followed by Visit Sanya, China with Ha Long Bay, Viet Nam in third position.

As the fleet exits Subic Bay and turns north they will experience light upwind conditions and potentially with some stop-start progress. The fleet will need to add on some extra layers as the temperatures are expected to cool as they progress north. However, upon the final run down the west side of the Philippines, the fleet can expect rising temperatures and a solid mixture of good downward conditions and light patches. Some exhilarating action will be expected as they cross the Luzon Strait southbound, where there will be strong wind on the beam. 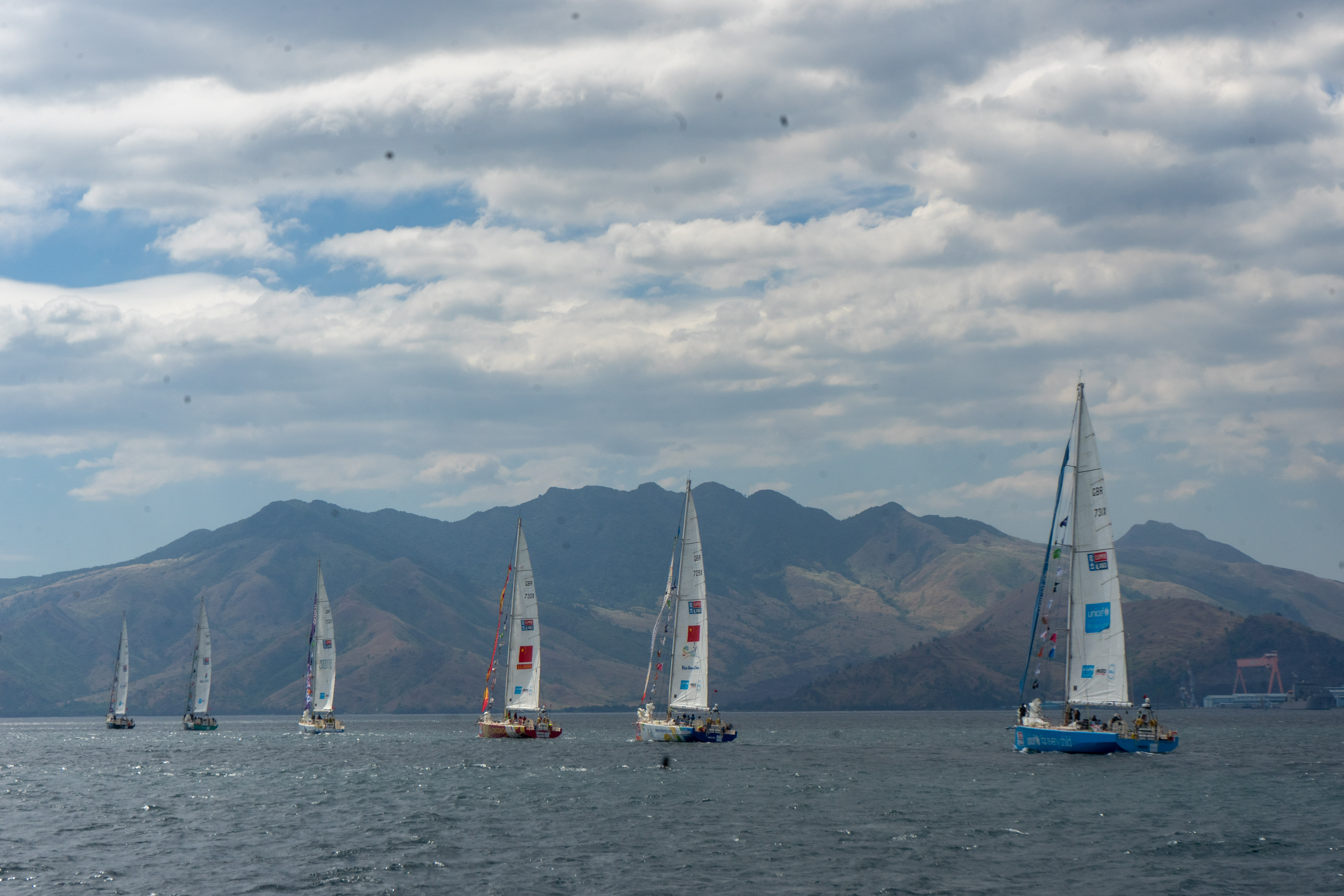 It is anticipated that the sea states will be rough which will provide bumpy conditions. The crew can expect lots of water over the bow and they might be susceptible to seasickness, a challenge of an upwind beat.

A tactical race is promised, with two Dell Latitude Rugged Ocean Sprints as part of Race 7, but each skipper and their teams will have to put all their strategic decision making into place by choosing whether to opt for the north ocean sprint or south - a decision they will have had to make within 48 hours of Race Start.

Ha Long Bay, Viet Nam Skipper, Josh Stickland, revealed his thoughts:“The first part of the race is looking light and variable for the first 240 miles. Around the corner we have a sea state that could be interesting; the currents adverse to the trade winds. The last race the conditions were calm, when it did start to blow, the crew very much enjoyed it but it did take them by surprise and after having a bit of weather now they are well prepared.” 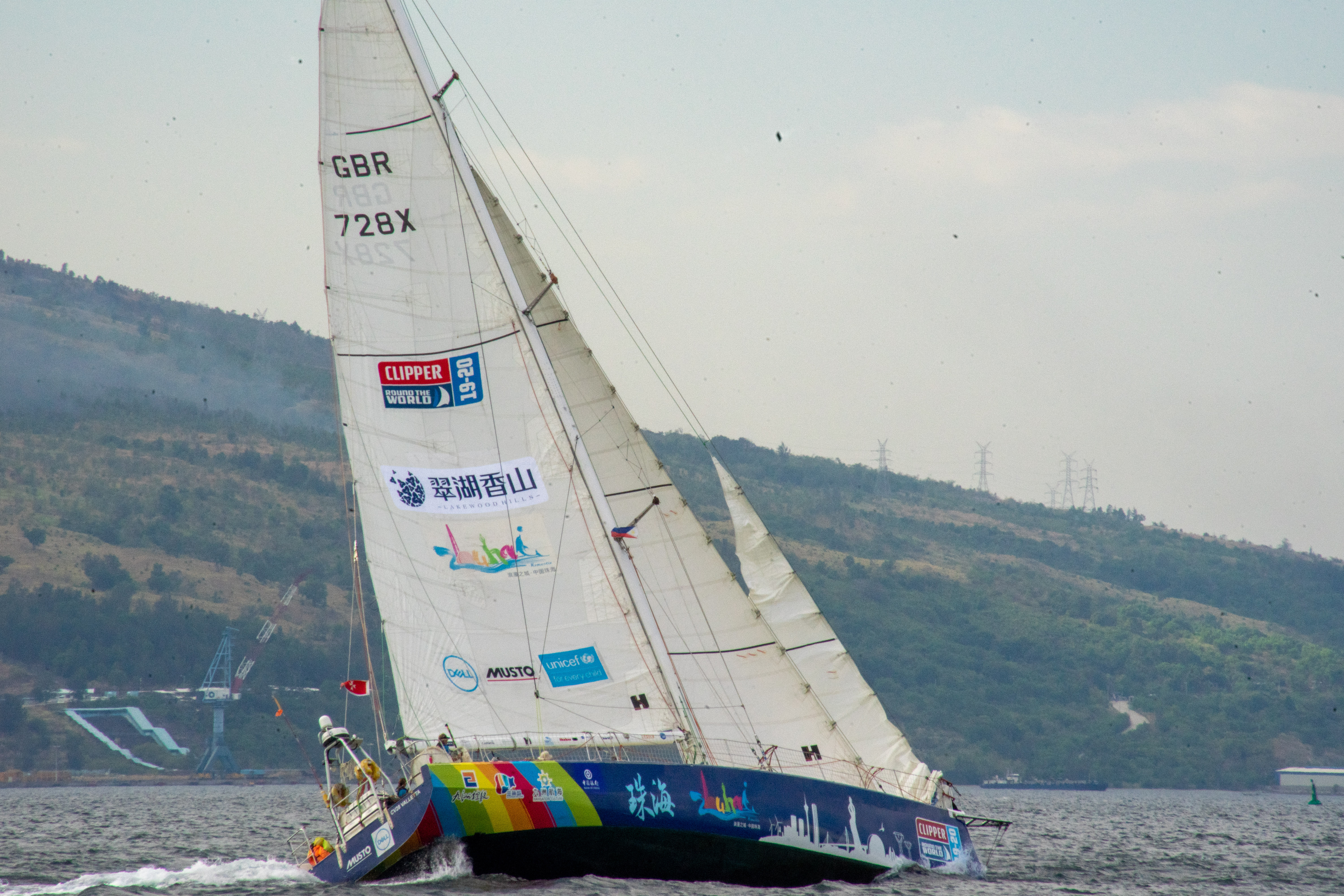 The crew (including the Skippers) are reflecting on the fact that this is a shorter race than expected. Zhuhai’s Skipper, Wendy Tuck says:

“We have done one leg together as a team and it's going to be a great opportunity for us to gel. It's a shorter race and I think everyone is going to stay focussed, I’m really looking forward to it. We will be racing in Zhuhai’s honour. We will have some heavy upwind stuff and heavy downwinds so it will be a race of many types.”

Speaking on behalf of his team, WTC Logistics, Skipper Rich Gould says: “It’s a short race, 1,600 nautical miles, very tactical with different options for the scoring gate and ocean sprints. There's a lot of points available in a short race, so it's all to play for!

“We’ve set ourselves a high benchmark, winning the last race so everyone is pretty positive - the difficult thing is going out and matching our previous performance.” 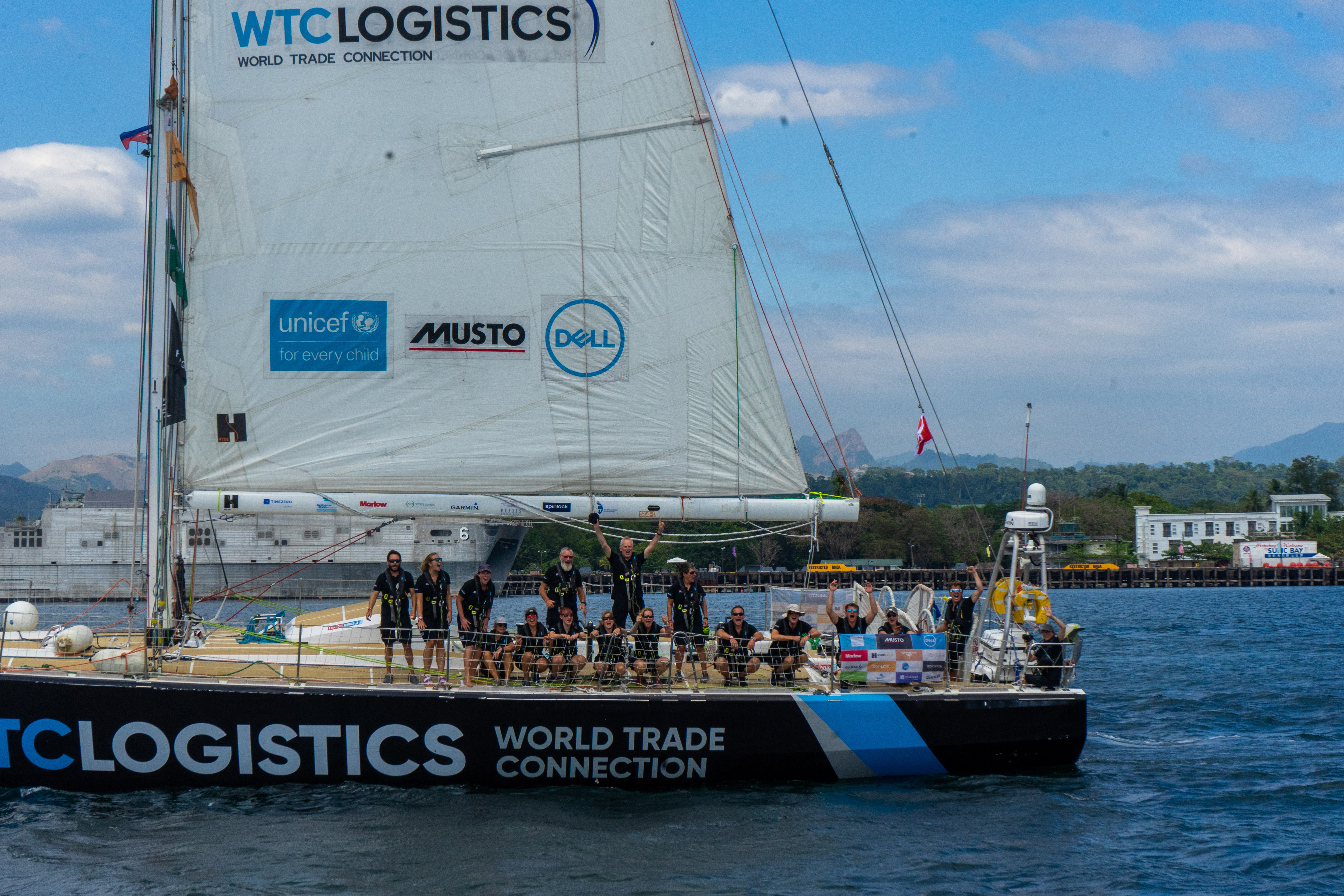 The competition is also hotting up with an additional Scoring Gate. This provides an exciting opportunity for six teams to score bonus points in the sprints and also for a possible six teams to attain bonus points at the scoring gates.

On the race ahead, Clipper Race Director, Mark Light said: “This race looks to be very tactical and we will look forward to a high octane race, with lots of intensity, energy and extremely varied conditions.

“When it comes to the Ocean Sprint North, this could well be hard work and challenging with some light conditions. In some ways this could be the sprint to go for as fewer teams may elect to officially enter this sprint, instead opting for the more straightforward looking Ocean Sprint South. This could mean an easier route to bonus points especially if only two or three teams enter.” 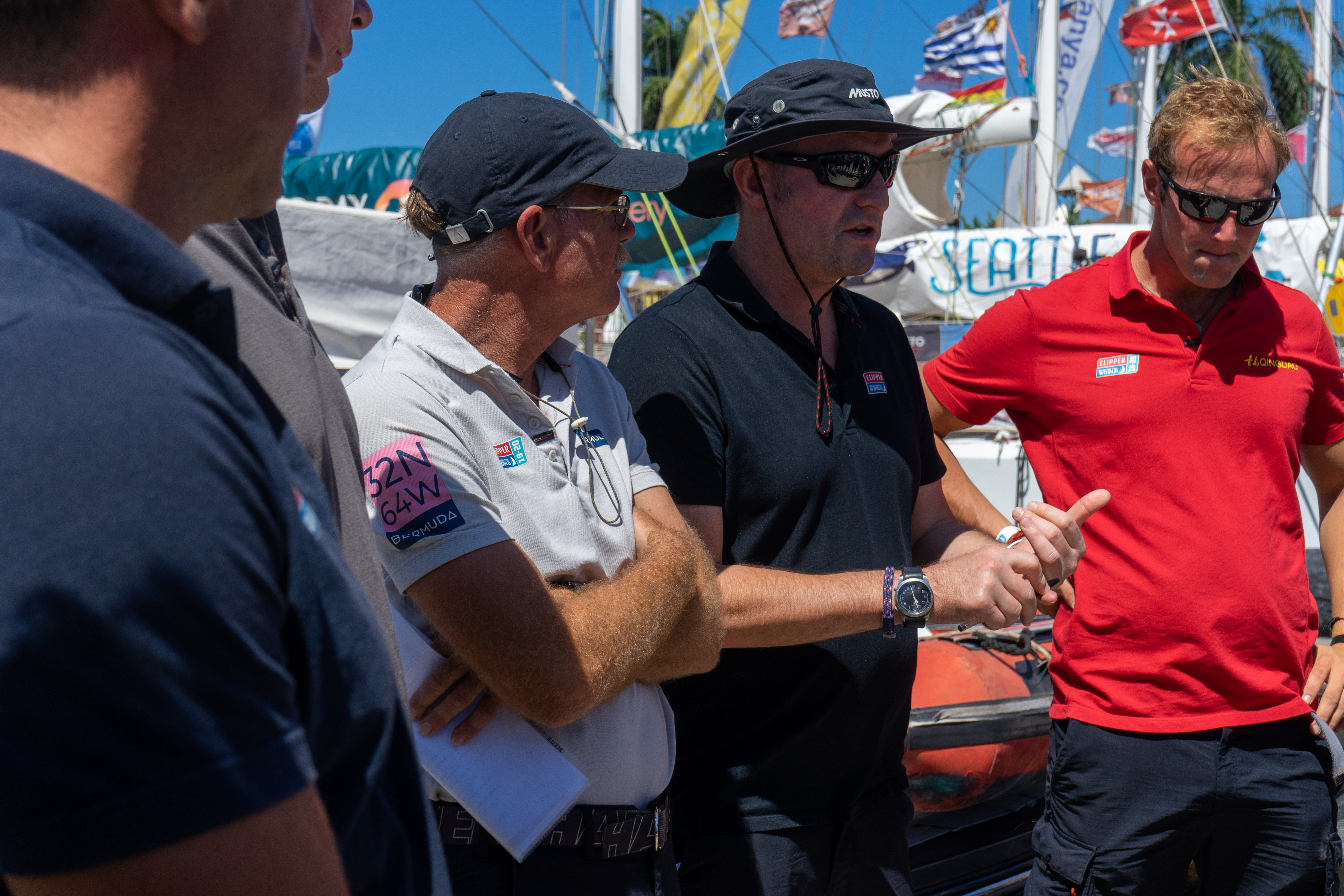 The additional tactics in the race could be a total game changer for the fleet as there are only four race points separating the top two teams on the overall leaderboard. Interestingly, the teams who are currently placed between sixth and eighth place are currently tied on points. There is everything to play for when it comes to who will reign supreme in the battle for the Clipper Race trophy and with just 11 points separating eighth from third place in the race standings, the results of this tactical race could really shake up the leaderboard.

Dare to Lead’s Guy Waites concurs this is set to be a thrilling race. He says:“It’s exciting - the way that the race route has been planned out with the choice of two sprints and two scoring gates, lots of exciting changes and I think it will make for an interesting race, tactically. The crew will be engaged in the tactics as it is their race.”

All the action can be followed closely via the website for the latest crew diaries and skipper blogs which make for an insightful read. Keep refreshing the Race Viewer, where you can see exactly where the fleet is at any time and who is leading. Follow the latest updates via Instagram, Facebook and Twitter.

Subic Bay has given the hard working Race Crew an opportunity to relax, take time away from their 70ft homes and enjoy some of the Filipino culture and culinary delicacies.In addition to checking out the local area, an impressive £1500 was raised for Clipper Race…

With the mountainous landscape and the tranquil water of the marina lit by the sunset glow as the backdrop, the…