It has been a short but tough race from Sanya to Qingdao, which ended in a dramatic finale for the podium positions for Race 8: The Sailing City Qingdao Cup. Six of the eleven Clipper Race teams have now crossed the finish line off the coast of Qingdao with the remaining five teams expected to battle upwind to complete their race later today.

After leading for eight successive days, PSP Logistics found a windhole right around five nautical miles from the finish line and could only watch on as Visit Seattle stole victory, followed just over an hour later by Sanya Serenity Coast for second, and Liverpool 2018 which took third. Read the full podium story here..

PSP Logistics eventually finished fourth, holding off Qingdao, in fifth even after redress had been applied, and Garmin which finished sixth. The teams have started arriving at the newly constructed Wanda Yacht Club in the West Coast New Area of Qingdao, with the Skippers and crew being given a full taste of the famous Qingdao welcome.

Elsewhere in the fleet, the battle for race points continues with less than ten nautical miles (nm) separating GREAT Britain, Nasdaq and Dare To Lead, currently in seventh, eighth and ninth respectively – although Nasdaq have 1 hour 45 minutes of redress to be applied.

GREAT Britain is leading the final charge today with around 15nm to go to the finish line and, after a busy night of gybing to avoid fishing nets, Skipper David Hartshorn reports: “We are expecting the winds to back from south to the north-east as the next low, with the associated front, comes across the race track and dominates the weather. So, after a number of days under the kite, the last push is expected to be an uphill beat in 30 knots of wind.” 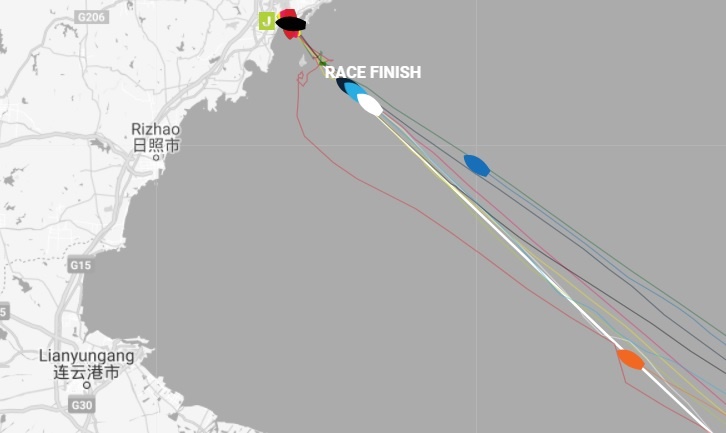 Nasdaq Skipper Rob Graham has also had a tense night of gybing and says: “It's still very close between us, GREAT Britain and Dare To Lead. The fog is thicker and colder than ever this morning, as the wind has switched into a building icy north-north-easterly after a light and fickle phase full of sail changes. We're hoping to get in before it starts blowing too hard and the sea state builds”

The conditions have certainly started to turn chilly as the teams head north, with Dare To Lead Skipper Dale Smyth, explaining: “We are beating upwind in 35 knots of very, very cold wind to make the finish line. We actually had a little bit of snow when it first came through. To make it even more exciting the visibility is virtually nothing in thick fog. This has truly been a very tough interesting leg.”

Arriving into Qingdao will be a welcome return for Unicef Skipper Bob Beggs, whose team is less than 50nm away, and says: “The team are as always upbeat and are looking forward to arriving tomorrow morning. I am looking forward to catching up with all the familiar faces from our tremendous welcome two years ago when, as Qingdao crew, we sailed into our home port.”

Around 100nm from the finish is HotelPlanner.com, which has had close encounters with the world’s largest fishing fleet and Skipper Conall Morrison reports: “Now we are in thick fog and becalmed… This is not forecast to last for long and soon we expect 30 knots from the north-east.

“This will bring colder and drier air to blow the fog away and we will be living at an angle for the last few miles.”

The Clipper Race’s Meteorologist, Simon Rowell, says that the strong north-north-easterly winds being on a weather shore will at least make for reasonably flat seas as the teams make their way to the finish line and the wind is forecast to say much the same for the next few hours before gradually veering and easing.

The latest Estimated Time of Arrivals to Qingdao continues to be updated regularly, and can be found here.

This is the seventh time the Clipper Race has included Qingdao as a Host Port on its global racing route, with the city the longest serving Host Port Partner of the race. For the first time, Clipper Race crews will berth at the newly constructed Wanda Yacht Club, a state of the art facility in western Qingdao. To learn more about what the teams can expect in Qingdao, visit the Host Port page.