After re-adjusting the onboard clocks, however, it is leading to much confusion as Nasdaq Skipper Rob Graham, whose team is currently in seventh place, reports: “We've made it back to the future! Or forward to the past! Or something like that!

“Yes, we crossed the International Date Line into "Groundhog Day" and guess what? ... Half the crew are still trying to work out what time of which day it is. Still, it doesn't matter, it's a nice day, the sun is shining and we're going quickly in the right direction.”

On board leading team Sanya Serenity Coast, which currently holds a 50nm advantage over second placed Qingdao, Skipper Wendy Tuck explains how double birthday celebrations were in order. She says: “We crossed the International Date Line last night with much fanfare and we decided that crew member Michael Davis is allowed have two birthdays and as such, he received two birthday cards.”

However, eighth placed Garmin will be looking forward to seeing the back of 9 April, as both days (Day 17 and Day 18) brought with them some unfortunate spinnaker situations. Skipper Gaetan Thomas explains: “So, after the kitemare we had yesterday, we were sailing under the Code 2 (mediumweight spinnaker) and just a couple of hours later, the crew called me with a following call for all hands on deck, one of the donuts (which is a strop holding the spinnaker on its head) snapped, resulting of the spinnaker in the water.

“Luckily, we got it back safely and it’s still intact.” 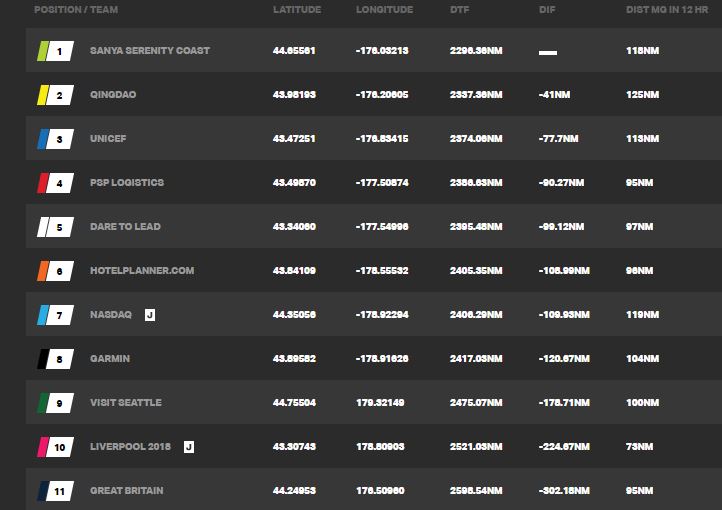 With the International Date Line crossed, the next hurdle for the fleet, which is still remarkably compressed after 3,000nm of racing and has converged yet again just south of the rhumb line, will be a physical one in the form of the biggest low pressure system of the race so far, due to pass over the fleet in the coming 24 hours.

With gusts of over 50 knots expected, the teams have a healthy respect for the weather system heading its way and whilst it will be fascinating to watch how the different team tactics play out, focus is likely to shift away from full-power racing during the heavy weather.

Sanya Serenity Coast Skipper Wendy Tuck, who has previously skippered a Clipper Race team across North Pacific, knows all too well about getting the balance right between pushing hard and knowing when to hold back. She says: “We could have gone faster last night but it was the old trade off of risk versus speed, and we are playing the long game.

“In the next 24-30 hours, we will have our first big blow of the North Pacific, it will be good to have the first one done and dusted. We are ready, now just have to stay out of a wind hole before it arrives and not cross 45 degrees, which is our virtual beach.”

GREAT Britain Skipper David Hartshorn is also no stranger to the North Pacific and adds: “Having been this way before, I fully respect the weather a North Pacific low can bring, so treading lightly and with large respect is the order of the next few days.”

For most competitors in the Clipper Race fleet, it’s the relative calm before the storm, with teams bracing themselves for a period of text-book North Pacific Ocean weather on day 15 of the 5,600 nautical mile race to Seattle.In what should result in excellent racing…

A thrilling match race played out in the midst of the North Pacific overnight as Sanya Serenity Coast,…