Progress in the race to Seattle has continued to be hampered over the past 24 hours by the high-pressure system which has kept teams in very close proximity of each other. However, the light at the end of the windless tunnel appeared this morning as the fleet reported windspeeds on the rise, meaning that most of the fleet is starting to build some speed with the wind forecasted to continue to build from the east over the coming hours.

After five days of racing, there is less than ten nautical miles (nm) separating the top half of the fleet and with Visit Seattle in first place after taking after making the decision to tack early, Qingdao is in second and Unicef holds onto third place. 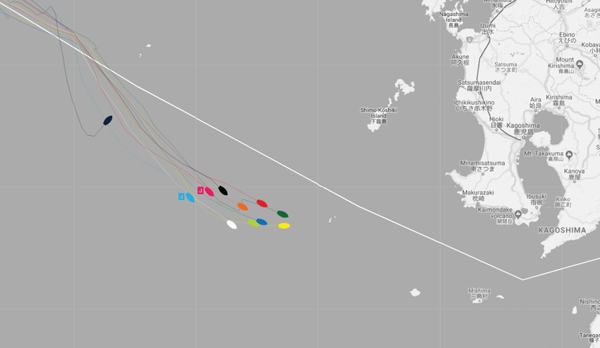 Qingdao Skipper Chris Kobusch reported: “Last night saw us bobbing around on the spot, or even drifting backwards for a while, and the whole fleet came together again. Most of the yachts are back on AIS with Visit Seattle in the lead.

“Luckily the wind is back for now and we are heading south east towards the virtual Mark Keohane. It looks we will have to throw in two tacks to make it to the mark, though.”

Following the successful transfer of a replacement watermaker from PSP Logistics yesterday, Unicef resumed racing at 1211UTC and has manage to maintain third place despite its diversion.

In the middle of the leaderboard, PSP Logistics moved into fourth place and Sanya Serenity Coast into fifth. Skipper Matt Mitchell said: “The wind has been up and down like a yoyo and back and forth more times than a tennis ball at Wimbledon. We've been making steady progress though and it's encouraged some fleet compression meaning we now have everyone on AIS all within 10nm or so. Just like a race restart!

“We have breeze for the time although the forecast has it dying out again as we re-enter the centre of the high-pressure system that is affecting us at the moment.”

This compression of the fleet has meant a favourable position change for HotelPlanner.com as it moves into sixth place. Skipper Conall Morrison said: “This morning saw a very atmospheric sunrise and it almost framed Garmin so nicely as we passed around 300m from each other. Since then we have been upwind in about seven knots of true wind and the Yankee 1 is up again. Sailing in close proximity with other boats is a good motivator to be always trimming and the team is benefiting from its attention to detail.”

For Dare To Lead in seventh and Garmin, eighth, there is relief that the wind has started to increase but both teams are having to be constantly vigilant in checking for kelp fouling their rudders and slowing their progress.

Playing their Joker Cards during this race is Liverpool 2018 and Nasdaq, currently ninth and tenth respectively, and the teams will double the points from this leg. Nasdaq Skipper Rob Graham is ecstatic to be moving again and hopeful that his team can utilise the windholes to their advantage: “The gaps between the fleet have become elastic through the succession of windholes - in the past 24 hours we have had everyone except Qingdao and Visit Seattle visible on AIS, and we're currently creeping closer to Liverpool 2018 and Garmin.”

Despite being slightly off the pace of the leaders, spirits are high on board GREAT Britain, currently in eleventh,and the crew are pleased to also be feeling the effects of even the slightest increase in wind speed. Skipper David Hartshorn said: “I can hear water, like a babbling brook along the side of the hull, the boat is leaning to starboard. The AWS and TWS graphs have spring into life showing a steady upward trend, OMG we are sailing!”

With all eyes focused on the weather forecast to get around the south of Japan and finally into the North Pacific Clipper Race Meteorologist Simon Rowell said: “The next few days will be quite tricky still, as the departing low with its trailing front move off to the East. Today looks fairly light for negotiating the south west corner of Japan then on Thursday and Friday the North then North Easterlies behind the departing front should kick in, so expect the first rough conditions of the trip.”