As the seven Clipper Race teams which have arrived into the Whitsundays paraded along the Airlie Beach foreshore there were cheers from supporters and locals who’d come along to support them. The three teams still racing were not forgotten with Leg 5 crew who had arrived early, representing their crewmates at sea. 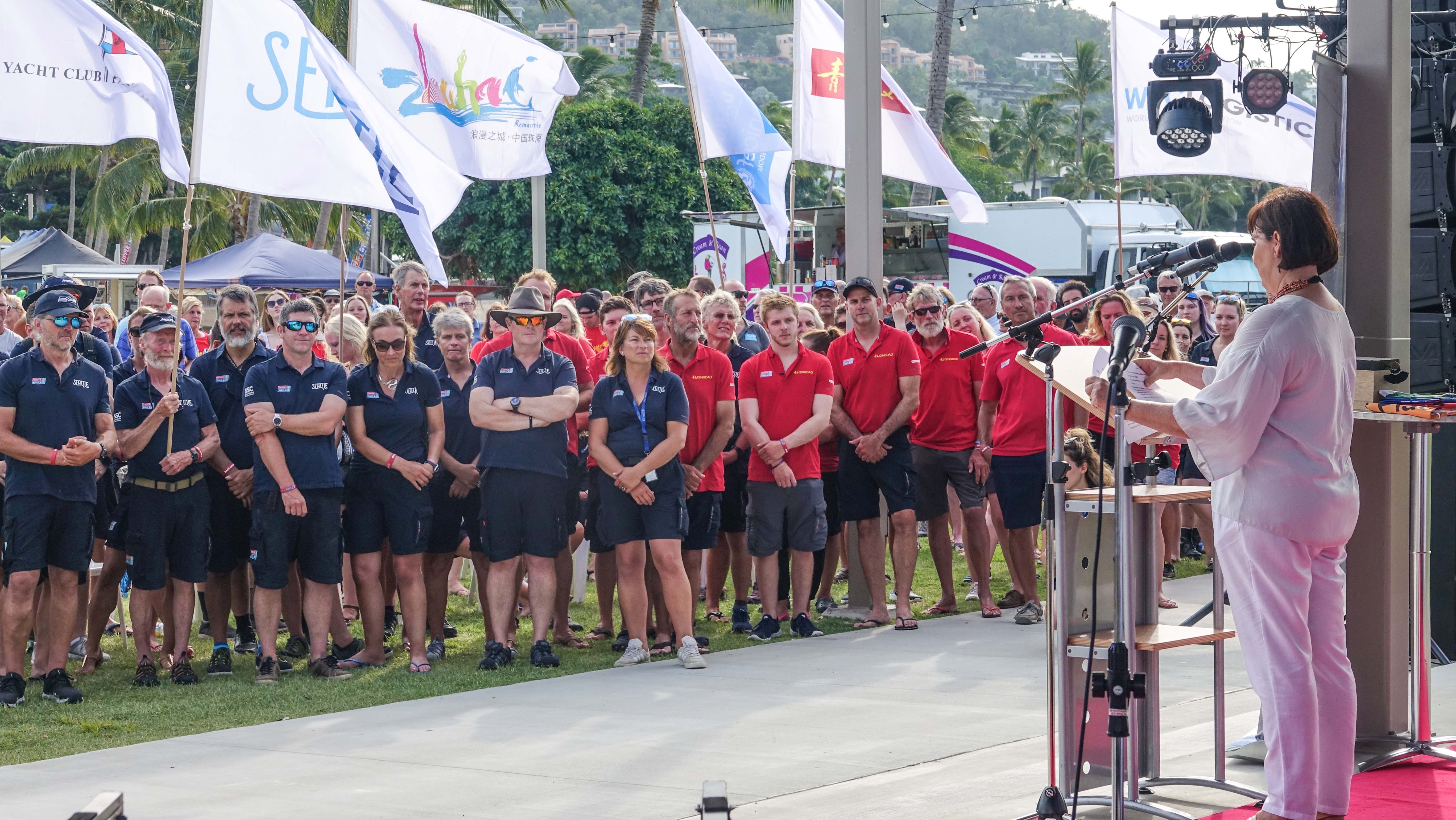 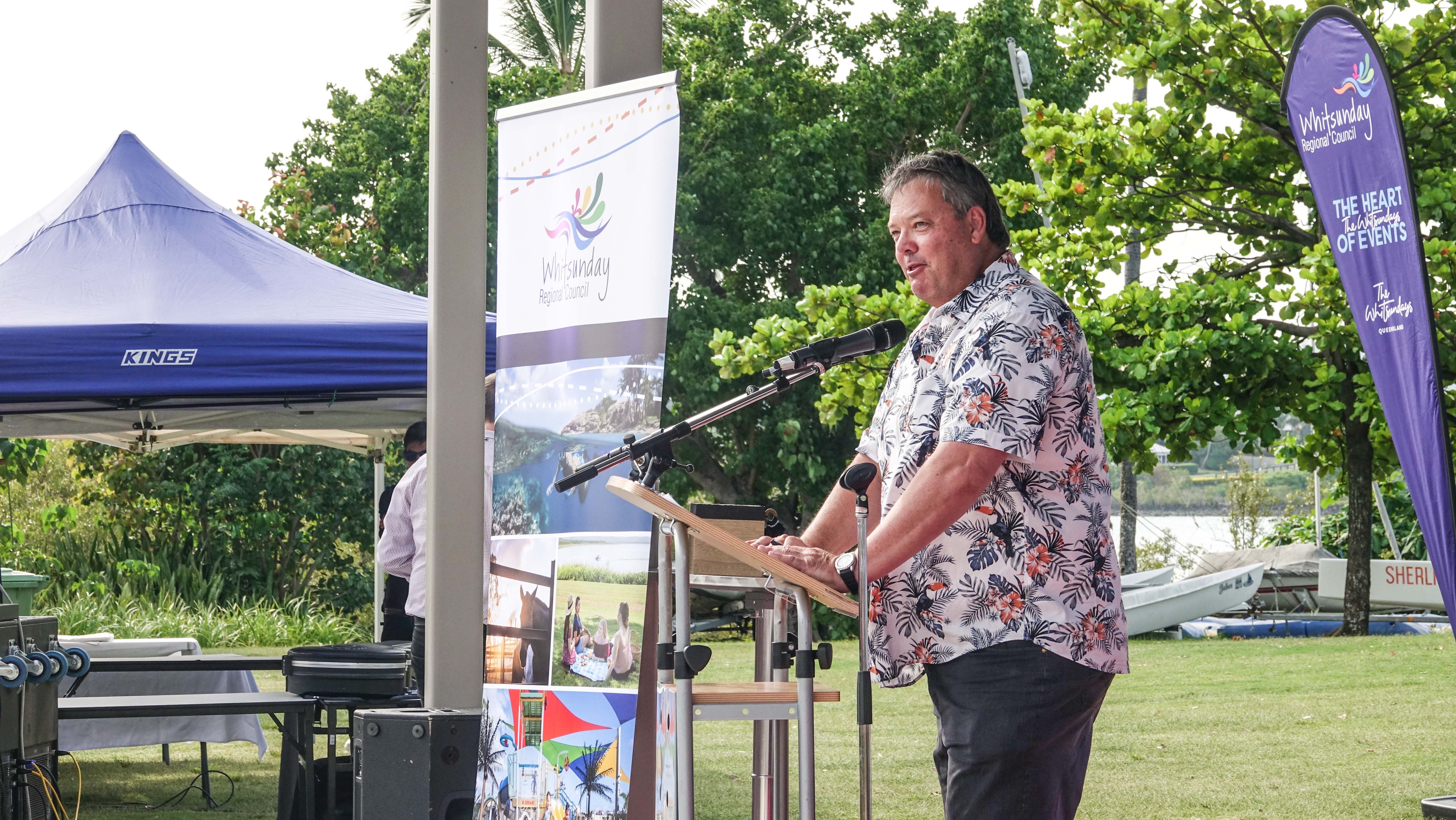 “What I want everyone to do is have a great time in the Whitsundays as it is a truly magnificent part of the world. We hope you enjoy it as much as we do and we invite you to come back as we know you are only here for a few days. Bring your family and friends as you will always be welcome.”

Member for Mackay, Julieanne Gilbert, thanked Aunty Sue for the welcome to country, acknowledged the traditional owners and delivered a big Queensland welcome to all the crew before handing over to Race Director, Mark Light who presided over the Clipper Race Prizegiving. He took to the stage, congratulating the crew on their achievements during Race 5: The Whitsundays, Heart of the Great Barrier Reef. 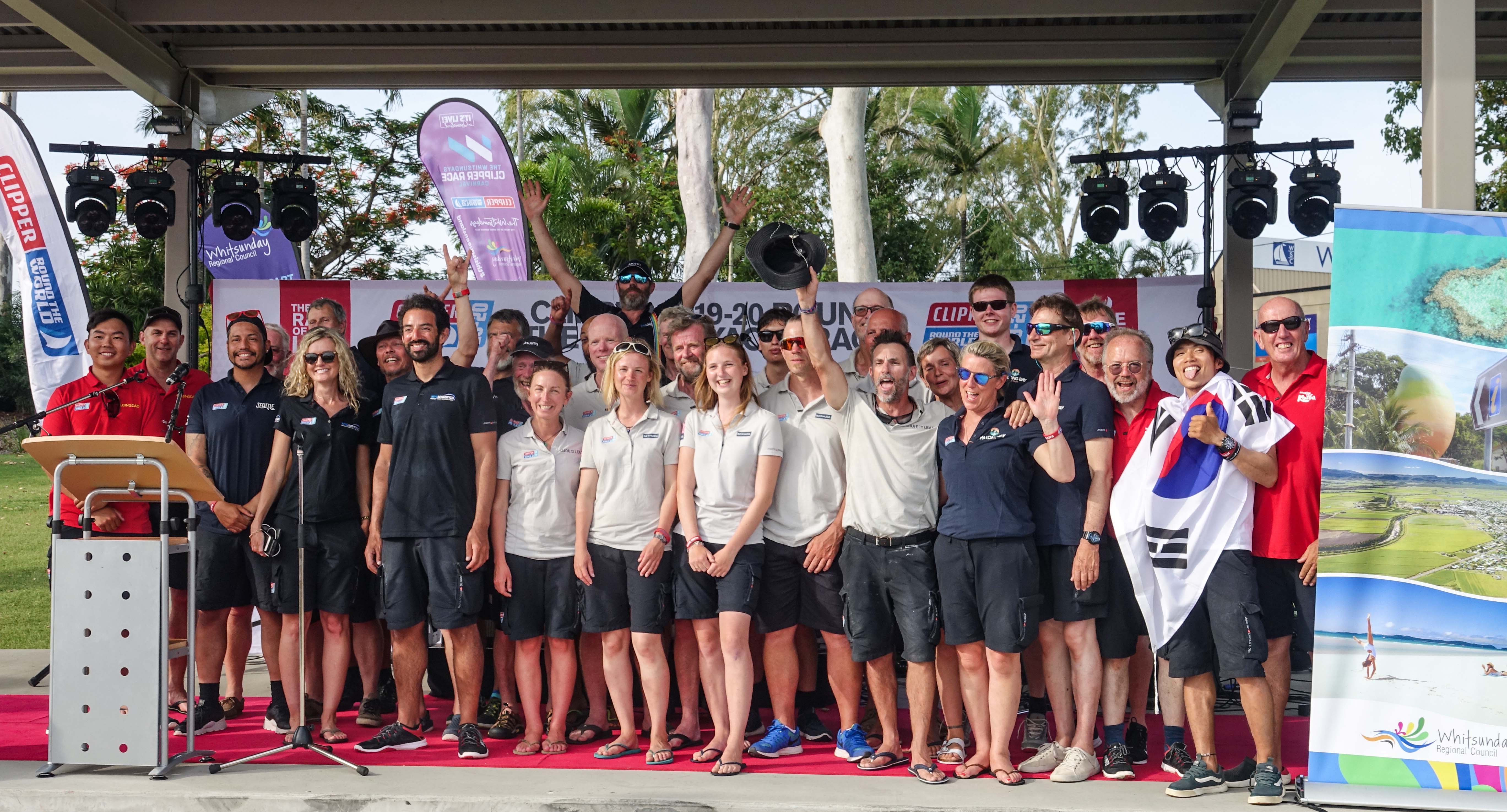 IMAGE: Congratulations to all Race Crew who have completed their journey and are leaving the race in the Whitsundays

Thanks was given to all who have been raising vital funds for Unicef UK, Clipper Race Charity Partner. An incredible £231,789 has been raised so far towards the target of £400,000. Special mentions went to Qingdao, which has so far raised £19,934, Dare To Lead, surpassing its target with £32,372 and still topping the individual team total Unicef with a whopping £70,697 raised so far. 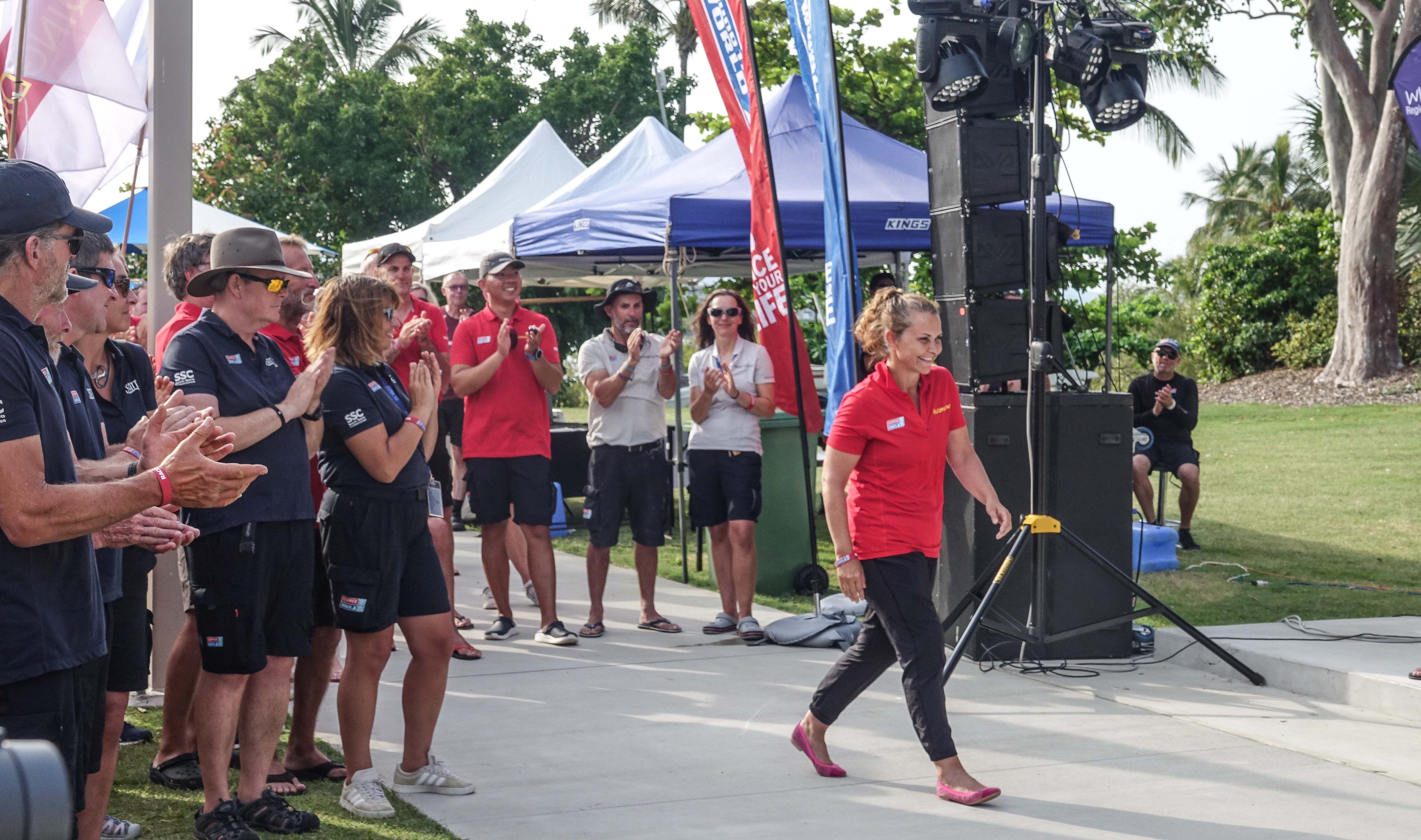 The first award of the event went to one of the incredible crew fundraisers, Julie Hood, who is on board Qingdao. Julie has raised over £9,000 and won the Unicef Charity Champion Award.

The Media Prize was up next and is given to the very best blog, video or photo sent back from the boat during each leg. For Leg 4, the prize was awarded to a crew member who has written blogs which eloquently sum up their experiences on board. From sailing under a canopy of stars to spotting a pair of albatross expertly skimming the ocean surface, the Media Prize went to Ian Griffiths, from WTC Logistics. Recognising the efforts of the Scoring Gate section of the race, the results were announced to the crowd. Punta del Este was first to cross the line, taking the maximum three bonus points. They were closely followed by Visit Sanya, China which scooped two points, and crossing in third and claiming the final bonus point was Zhuhai.

One of the big reveals of the afternoon was the results from the Dell Latitude Rugged Ocean Sprint. A huge well done was given to Visit Sanya, China on completing the course fastest in a time of 35 hours 01 minute and 06 seconds, an incredible five and a half hours faster than the closest rival, to add three bonus points to its overall tally. Second fastest was Unicef, for two bonus points and third was Imagine your Korea which adds one point to its tally from Race 5. 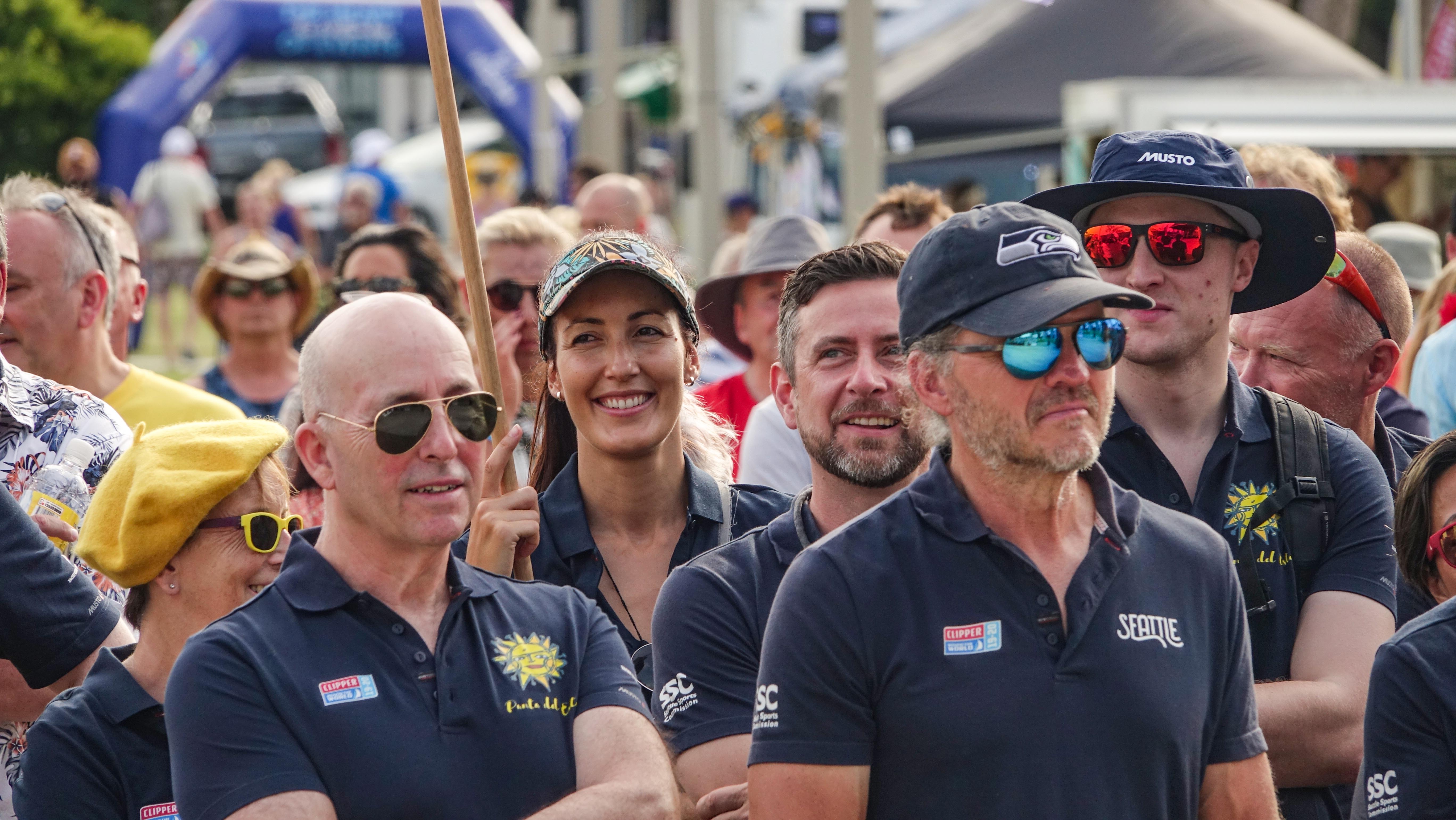 Race 5: The Whitsundays, the Heart of the Great Barrier Reef was run on elapsed time with three boats, Punta del Este, Visit Sanya, China and Unicef, leaving 48 hours after the other eight. Punta del Este and Visit Sanya, China, due to the light wind conditions, made the difficult decision to cease racing and accepted tenth and eleventh place respectively. With Unicef still racing the final placings are still to be decided. Prizegiving therefore honoured the three teams which crossed the line first. 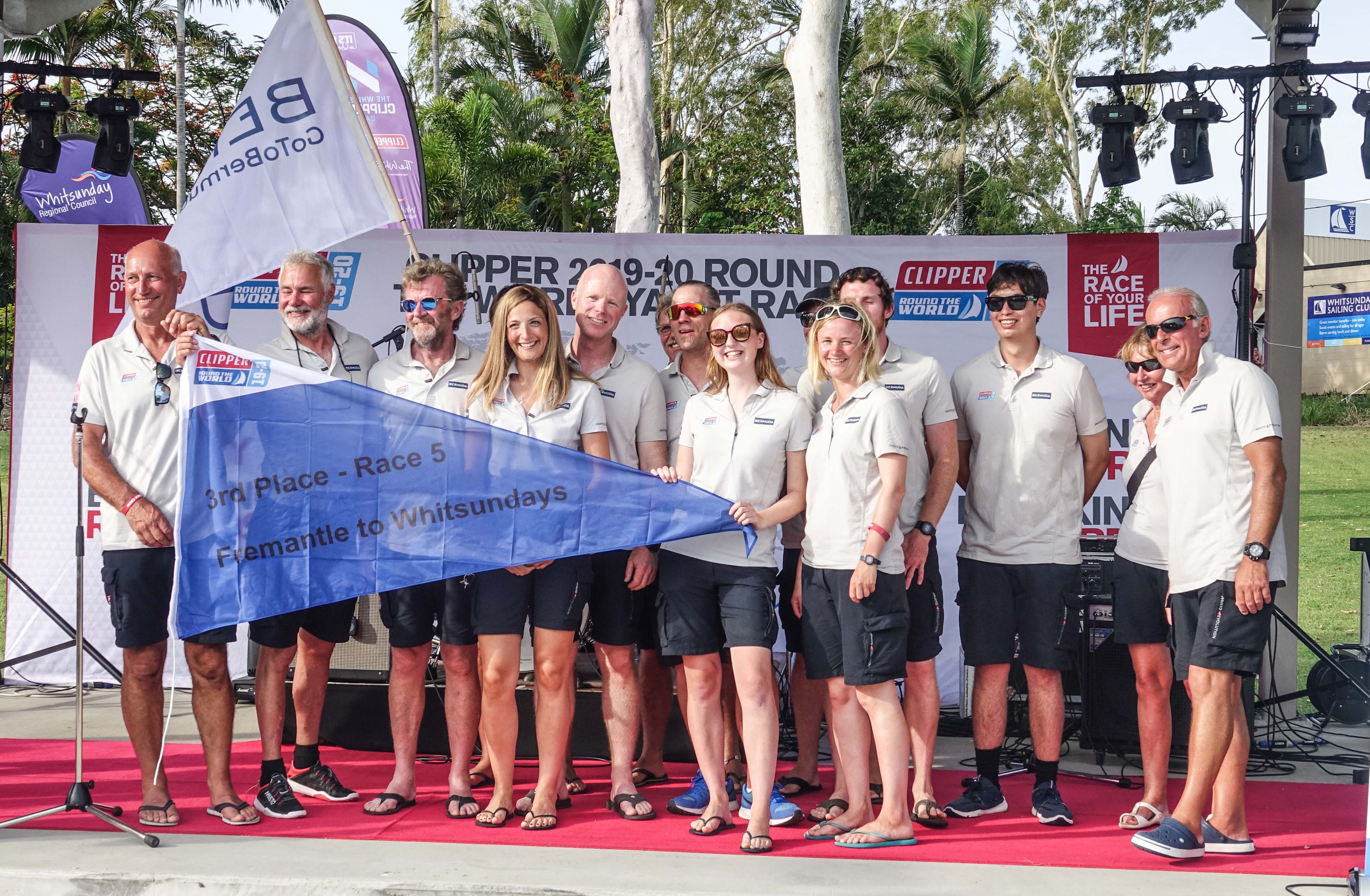 First to the stage to collect the third place pennant was Skipper David Immelman and his team GoToBermuda.

Next up and making a return to the podium, with its highest placing so far, was Imagine your Korea, who won second place in Race 5. 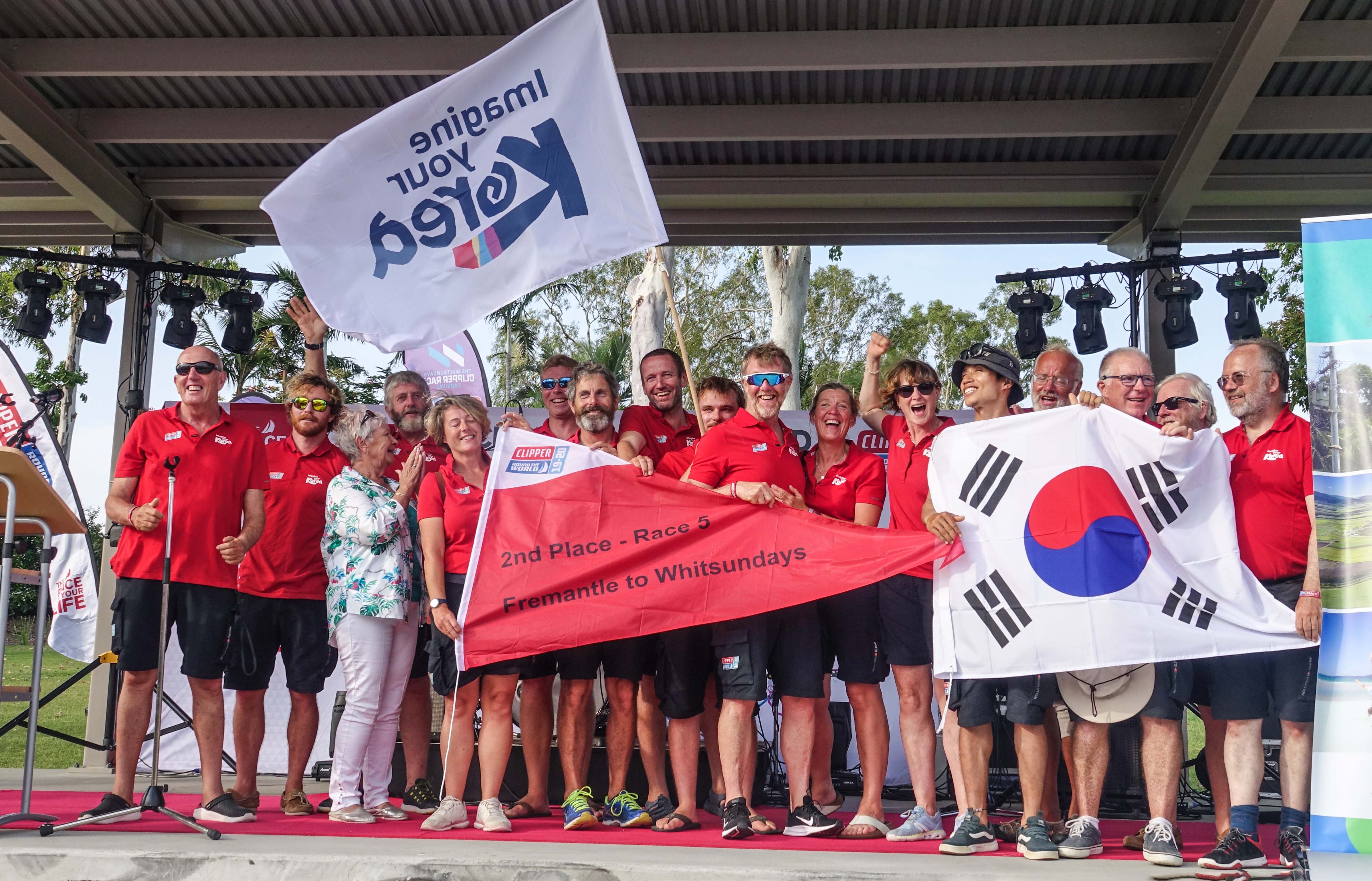 And then it was time for Ha Long Bay, Viet Nam to step up and receive its debut first place pennant after claiming line honours and top placing. 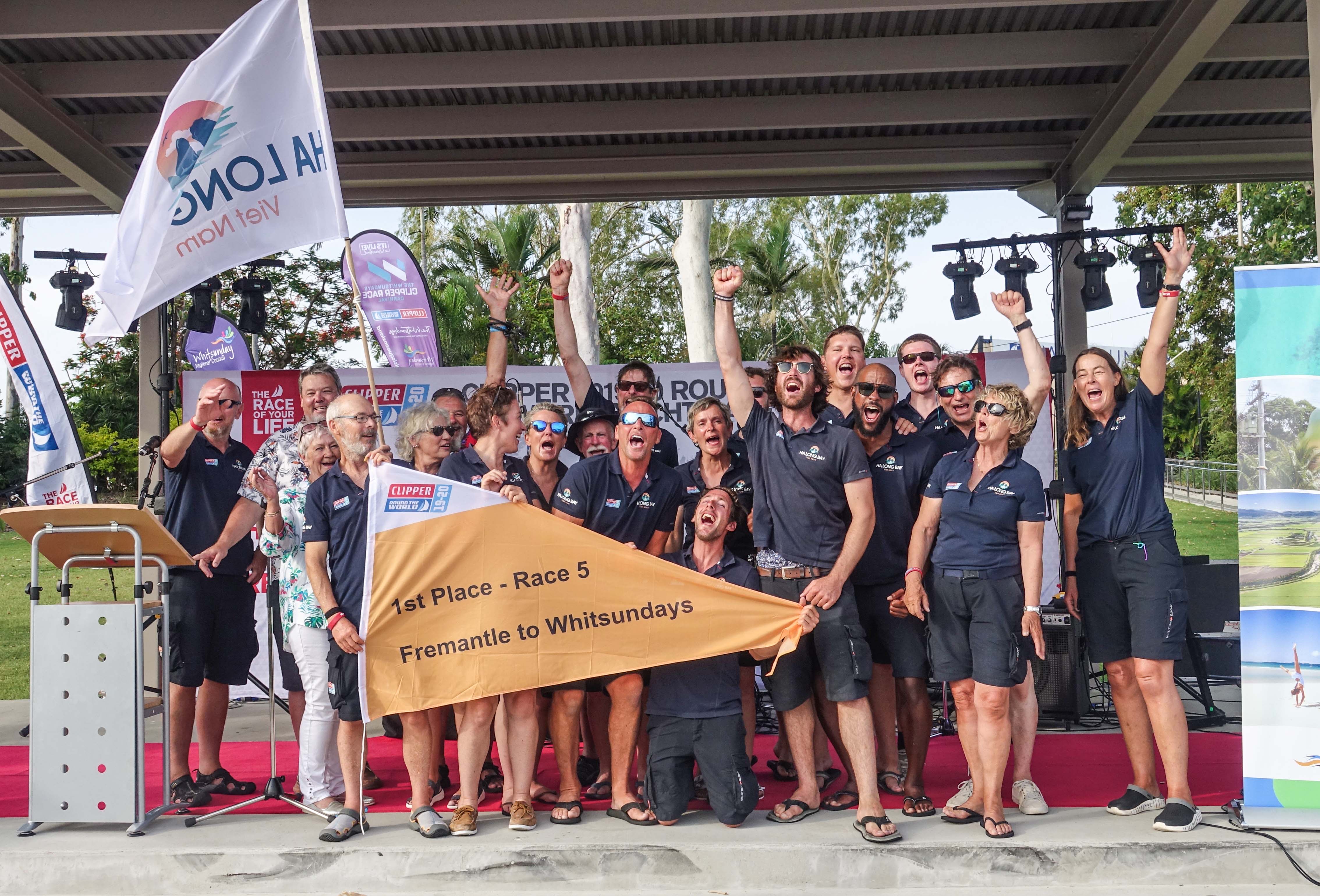 The Whitsundays sure knows how to put on a party as celebrations continued well into the evening with food, music, dancing and to close the event, fireworks.

The fleet will be berthed in the Coral Sea Marina Resort, Airlie Beach for the duration of the Whitsundays stopover. A vast array of events are taking place during the Whitsundays Clipper Race Carnival. For the full list of events, information and tickets visit Whitsundays Host Port Page.