Skippered by Rich Gould, alongside first mate Dan Jones, the crew of WTC Logistics overtook five teams in the final few days, including Qingdao and Ha Long Bay, Viet Nam which had led for the majority of the race. The team seized the day when light winds in the Luzon Strait created opportunity for the chasers to become the chased.

The team will grace the Race 6 podium in what is the team's highest ranked achievement to date. Speaking on his arrival, Skipper Rich Gould said: “The last 36 hours you could cut the tension on board with a knife!

“It was a long race with some big tactical decisions. I think some of those decisions we played quite well. There was also an element of luck in it with the windholes but the guys have been working really really hard to get us where we finished and of course there is also the couple of points we picked up with the scoring gate. All in all, an excellent result.” 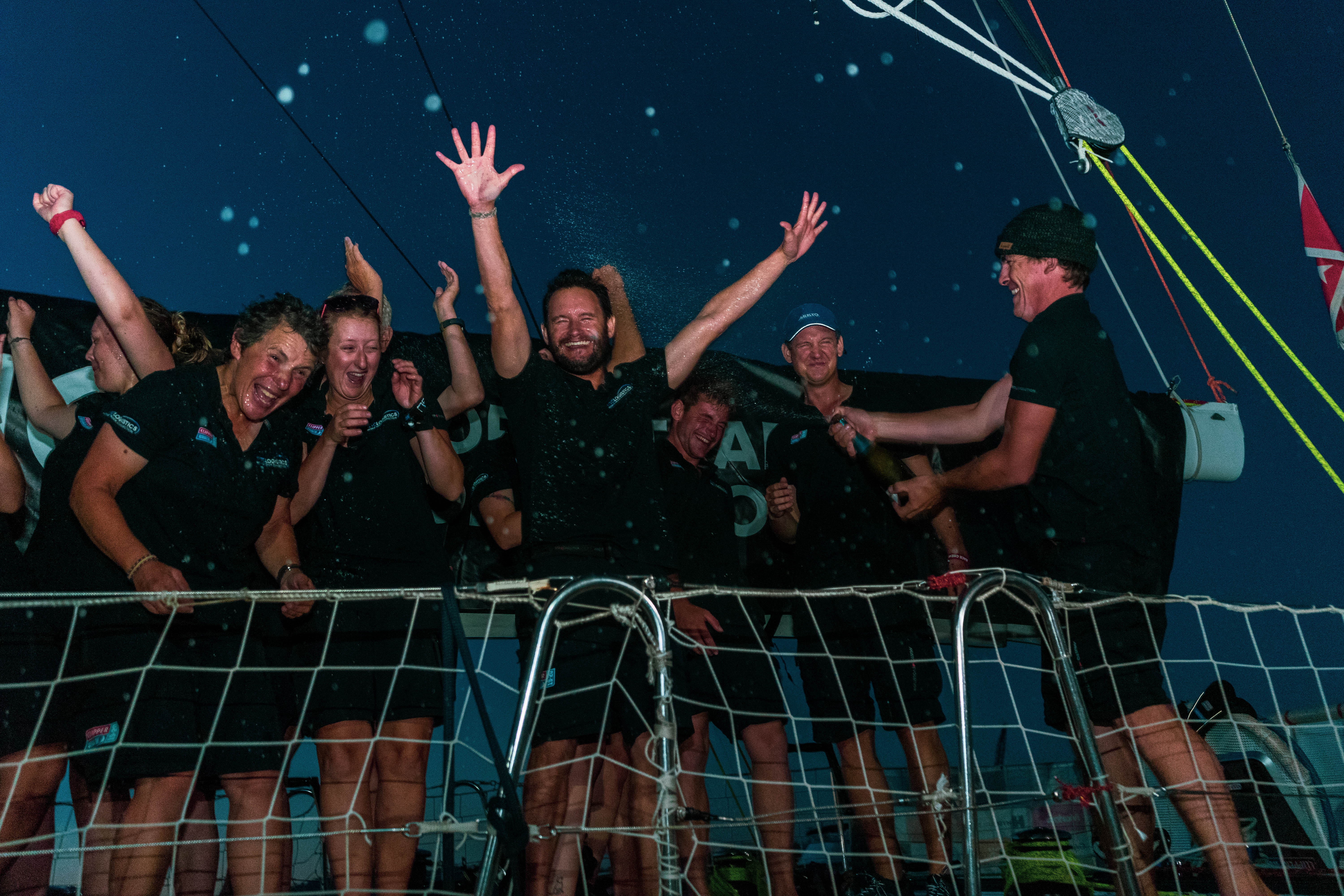 IMAGE: Celebrations on board WTC Logistics

Race 6 included many highs and lows for WTC Logistics but one of the turning points was the timing of the decision to switch on the motor during as it entered the Doldrums Corridor. Electing to wait until day seven of the race was a tactic played by Skipper Rich Gould, and saw the team sail past their competitors who had already used their motor allowance, and jump up the leaderboard.

Rich commented: “It was very nerve-wracking watching other teams around us motor off into the horizon. I was thinking “is this the right thing?”. We hung on and played the card right at the last minute and it paid off very favourably and it put us in a good position for the scoring gate. We passed through the scoring gate second which was great for team morale, the first scoring gate points of the circumnavigation.”

The team opted for an offshore route to the rhumb line throughout the majority of the race until rounding the Luzon Strait, when the tactics changed as the fleet faced increasingly light winds. It was navigational decisions here, and a dash of luck there, that saw them make the best of the weather conditions and become a serious contender for a podium place.

The team had 16 intrepid crew members on board and WTC Logistics boasts a strong female to male ratio in favour of the female, which includes the dynamic mother and daughter duo of Melanie and Jasmine Morris. Speaking of their victorious arrival into Subic Bay, Jasmine Morris said: “We dug deep, saw hundreds of sail changes and evolutions and we all wanted it. It was Rich and Dan’s leadership that got us here. We didn’t expect to be first but we are buzzing.”

Melanie said: “It’s been exceptional teamwork, everyone has pulled out all the stops. It has been a complete joy, a really, really happy boat.”

Jasmine added: “There are more girls than boys on board - it is all about girl power!”

Operations Director Anthony Clarke, from debut Team Partner WTC Logistics said: “Congratulations Rich, Dan and our amazing crew on achieving first place in Race 6 of the Clipper Race and for achieving second place in the Scoring Gate too.

“The whole WTC Logistics team, along with our family and friends, have been following your exciting journey. I think everyone would agree this has been one of most closely fought finishes of the 2019-20 edition so far. The last 80 miles have been riveting. Your hard work and determination have really paid off, what a fantastic team you are!

“Supporting the Clipper Round the World Yacht Race is as exhilarating and as it is exhausting! Tapping the refresh button to see the latest race positions is an essential component to everyday life now, if we have more races like this, we may need to purchase new keyboards! We can’t wait to see you pick up your first pennant of what we hope will be many more.”

The fleet will be berthed at the Subic Bay Yacht Club for the duration of the stopover and awaiting the crew is a relaxing stopover of nature, palm-lined beaches, Filipino cuisine and exploration of the mountainous ranges on the island Luzon, which is the biggest of 7641 Philipinne islands.