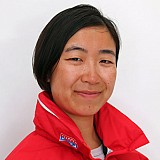 The Race Start was amazing. There were thousands of people cheering for us. We got a lot of blessings from our families, friends and supporters. It was a truly exciting moment seeing Zhuhai passing through London’s Tower Bridge.

I remember there’s an inspiring slogan “ordinary crew like you” on the stage. Since I was introduced to the Clipper Round the World Yacht Race two years ago, I always dreamt of being here as a Race Crew member. Thanks to the Clipper Race, an ordinary person like me, is now embarking on a new journey to sail across the Atlantic Ocean.

Later we anchored near the starting line.

The race started at 10am from Southend Pier. We were fifth to cross the starting line and soon became third. We got the Spinnaker out and flew it. Everyone is so excited. We aim to win.

We have 15 crew on board. Our watch system consists of three watches, on, off and standby. Each watch has one watch leader. We take roles in turns, such as navigator, engineer and cleaning duties.

We still saw the other Clipper Race yachts around on the first night.

The language learning program begins. There’s a mix of cultures on board as we have crew from all over the world. There are more than seven languages spoken by us. The crew look forward to visiting Portugal, Uruguay and China. So everyday, we write down a new word on the whiteboard, such as “Hello” and “thank you” in Portuguese, Spanish, French, Swahili, German, Afrikaans and Chinese. We are making good progress and having fun to learn more about other cultures.

I started to feel seasick.

We decided to have a happy hour time with all the crew on deck and a briefing at 12 pm everyday.

Very cold but an exciting night. Surfing on the big waves. Singing “Fly me to the moon” with my team members when were sailing downwind at over 25 knots was one of the highlight moments.

It looks promising. Each evolution is getting better and better. We look forward to seeing Portimao on the horizon.